Born and raised in Portland, Oregon – nestled comfortably between the imposing Cascade Mountain range and the rugged Oregon Coast, wilderness has always been Noah’s sanctuary. After completing a Bachelors degree in Applied Mathematics from Portland State University, Noah took an offer to work on a graduate degree in Marine and Lacustrine Science and Management at Vrije Universiteit Brussel in Brussels, Belgium.

Noah’s passion for birds began at a young age when he would sit in the backyard and take notes on birds that would pass by only to attempt to identify them later on. Fast forward many years later and Noah’s current research at VUB focuses on developing spatially explicit modeling approaches for describing context-dependent habitat selection among migrating bird species – specifically those that are near the ocean. In other words, why do birds chose the habitats that they do?

In his spare time Noah enjoys exploring the many historical sites of Belgium and when back in the Pacific Northwest for research or other reasons, completes as many hikes as possible! 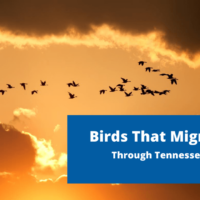 Temporarily in Tennessee: Birds that migrate through Tennessee Graceland, Dolly Parton, and The Great Smoky Mountains … these are just a few of the things that Tennessee, ‘America at its best’ as the state slogan says, is known for. But for birders, Tennessee is known for something else – is the end-point for countless birds during the summer. A viewing point for the great migration of so many species. A welcome oasis where the birds can finally rest their exhausted pectoral muscles after spending up to 600 miles a day airborne. Along the ridgeline of the Southern Appalachian Mountains, Eastern Tennessee provides migratory birds with an important lifeline as the make their way into Mexico and further South towards their breeding grounds. On the Western side of Tennessee runs the mighty Mississippi River, the third-largest watershed in the world where thousands of small estuary-like systems are a refuge for traveling birds…. 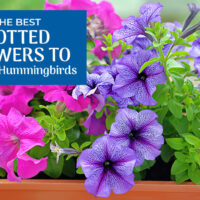 The Best Potted Flowers to Attract Hummingbirds As kids hummingbirds were like magic. They’d float effortlessly above the flower beds in the garden fluttering their wings so fast that they’d disappear to the naked eye. How’d they do it? What kind of illusion was this exactly? But believe it or not, those hummingbirds buzzing through your garden are actually creating a figure-8 with their wings in order to produce the hover-like action that we all associate with them. The delicate vibration of their wings is a welcome sensation to any garden-dweller or bird watcher. They are special birds, without a doubt. There’s simply nothing else like them in the avian world.  In fact, just recently, some researchers at St. Andrew’s University in Scotland discovered that some hummingbirds have the ability to apply complex numerical ranking to their food source … in other words, despite the natural numerical order of food… 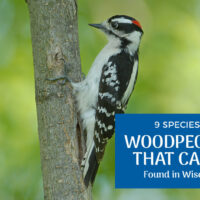 The 9 Woodpeckers of Wisconsin (Pictures) Spring has passed and summer is here. For the bird-lovers among us, observing season is in full effect. No matter where you are, there’s an abundance of avian life flouting its summer brevity. From migrating raptors through the American southwest to Snowy plovers on the Pacific Coast to the midwest’s mass migration of birds from the Canadian Arctic to the Gulf of Mexico (and further). But there’s one particular bird that has gained a soft-spot in birding culture, for its creativity, noise and let’s be honest – role in pop culture: the good ol’ Woody Woodpecker.  In fact, in the State of Wisconsin you’ll find 8 commonly observed woodpeckers. Of course, there are occasional sightings of other species that are perhaps exploring into new territory or maybe just in search of some true Wisconsin cheese curds, who knows? According to the University of Wisconsin…