A Bird That Sounds Like a Frog? Read On To Find Out More! 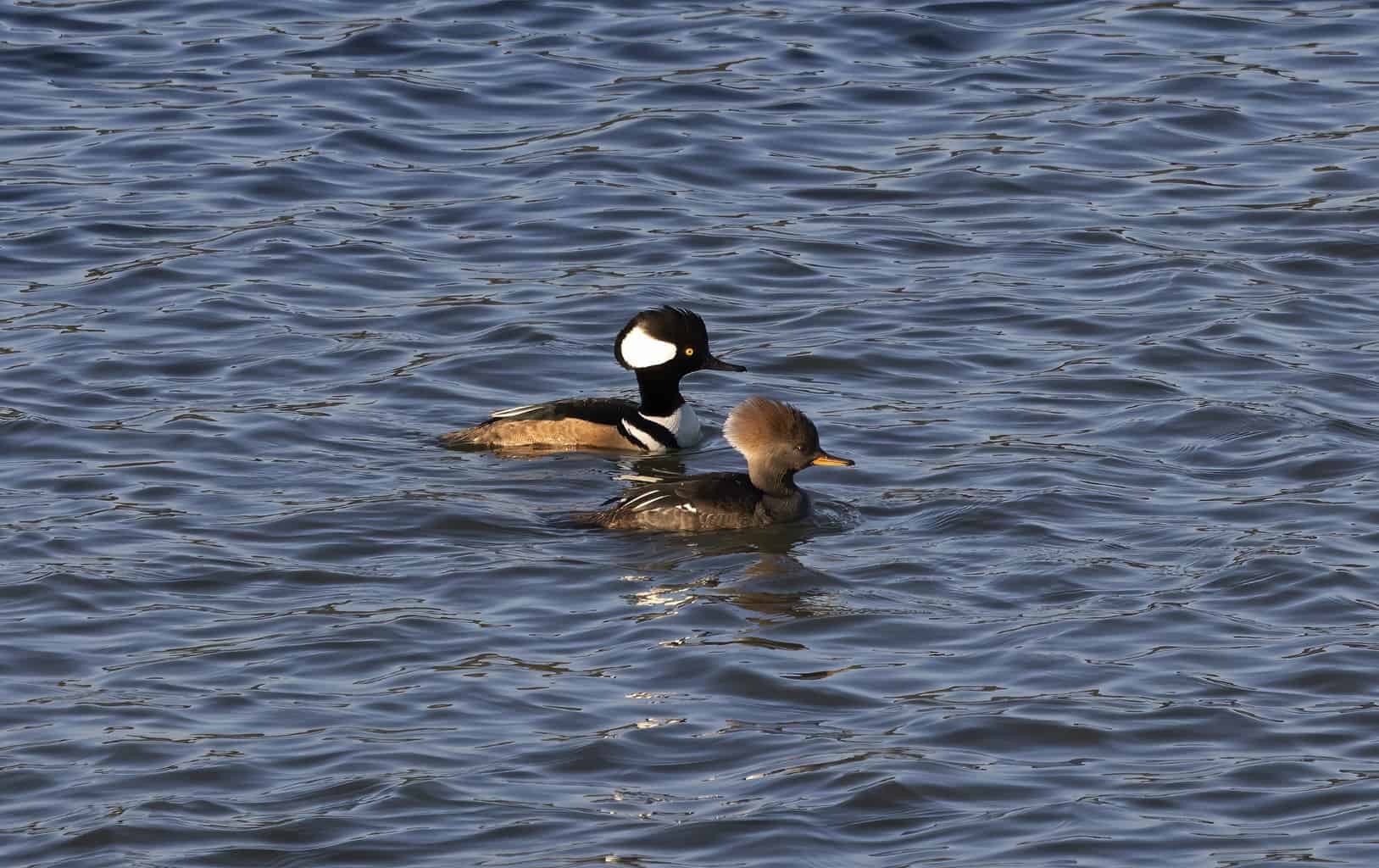 The Hooded Merganser is a small, flashy duck with a fascinating vocal quirk: males sound like frogs!

You can find Hooded Mergansers throughout most of North America, depending on the season. They are medium-distance migrants, traveling between the eastern and western halves of the continent. However, many Hooded Mergansers stay put all year long.

For many birders, identifying birds by their sounds and vocalizations is the next step after recognizing them by sight.

Let’s take a look at the fascinating Hooded Merganser, and how to recognize its frog-like sounds!

How to Spot a Hooded Merganser

Spotting a Hooded Merganser by sight is not difficult!

Although they aren’t very common ducks, and their numbers are declining, they are easy to recognize when you see them.

The male Hooded Merganser has a black back, white breast, and deep brown wings. His head is the most attention-grabbing thing about him, though. He has a large, dramatic crest with a white spot on either side, surrounded by black.

When the Hooded Merganser raises his crest, the white patch looks like a big circle. When he lowers his crest, it changes shape completely to the shape of a fan.

He also has white stripes on his back, and his eyes are bright yellow. His bill is pointed.

Females and juvenile males also have crests. However, their coloring is very different from their male counterparts.

A female Hooded Merganser has a brown and gray body and a big brownish-red crest. Unlike the male, she has no white patch on her crest. Her bill is pointed, just like the male’s bill.

In the summertime, Hooded Mergansers prefer freshwater ponds and rivers. They nest in tree cavities left behind by other birds and animals, always close enough to the freshwater ponds where they catch the fish that make up their diet.

In the winter, they live on larger bodies of water, sometimes saltwater and sometimes freshwater. They like to be protected from the elements, so they avoid big open water like ocean bays, large rivers, and lakes.

Hooded Mergansers live throughout North America, depending on the season.

Their primary breeding range is southeastern Canada, the Great Lakes region, and down into Iowa and central Missouri. Some will migrate south or southwest for the winter, all the way to Texas, Florida, and even California.

Some will stay put year-round, including in most of the Midwest, Northeast, and the Pacific Coast of Canada.

The Unique Sounds of a Hooded Merganser

Well, sometimes, yes! Other times, not at all.

Most of the time, Hooded Mergansers are very quiet ducks. They are only noisy around breeding season.

During the breeding season, males use their vocalizations to attract a female mate. His courtship call is a rolling sound, deep-toned. It is often described as sounding like a pickerel frog.

What is a Pickerel Frog?

The pickerel frog is between 1.75 and 3.5 inches long. Gray or tan-skinned, it has two columns of spots along its back. There can be anywhere from 7 to 21 spots, which are inconsistent in shape and size. They tend to be somewhat rectangular.

Pickerel frogs live in the eastern half of North America. They can be found in southeastern Canada, throughout New England, and as far north as South Carolina and Texas. Their range extends just barely past the Mississippi River.

The pickerel’s signature sound is described as a low-pitched “snore.” It lasts for about two seconds. Pickerel frogs only make this sound during the breeding season, which runs from March to May.

Females, juveniles, and non-breeding season male Hooded Mergansers do not sound like frogs.

Females call from mid-flight, and they also call their baby ducklings. That sound is more like a “croo-croo-crook.”

When they do this, they sound like most other sea ducks.

All this having been said, the breeding male’s ability to sound like a duck is why these ducks are often nicknamed “frog ducks.”

The pickerel frog sound of the breeding male is not the only interesting thing about the Hooded Merganser. These fascinating ducks have some other noteworthy characteristics!

Even though Hooded Mergansers are called “frog ducks,” there are actually several bird species that may be mistaken for ducks – or at least have similar bird calls or vocalizations!

Some birds are mimics, which means they imitate the sounds of other birds, animals, and other sounds around them.

Some of the most common North American mimics are mockingbirds, catbirds, and thrashers. In Africa, you have the Fork-Tailed Drongo that can mimic other birds and animals.

In Australia, the most impressive mimic is the Supreme Lyrebird, which can sound like just about anything it has encountered – including crying babies! If a Supreme Lyrebird thought the sound of a frog was new and interesting, and therefore helpful in attracting a mate, he might give it a try!

In this video, you can hear the sound of a mockingbird that sounds much like a frog!

That’s not the only example of a mockingbird sounding like a frog. According to the Macaulay Library from the Cornell Lab of Ornithology, mockingbirds can sound like cardinals, woodpeckers, car alarms, and plenty of other natural and mechanical sounds.

They reported that two researchers from North Carolina’s Elon University analyzed the collection of recordings in the Macaulay Library and discovered examples of 12 different frog and toad species among the mockingbird’s various imitations!

The researchers found that Northern Mockingbirds were most likely to mimic amphibians with the same vocal range as the mockingbirds themselves.

Check out the recordings where they identified the sounds of these frogs and toads on the Macaulay Library website.

How to Spot a Northern Mockingbird

The Northern Mockingbird has a range that spreads across the United States and Mexico. It is barely found in Canada, only along the very edge of the southern border.

Mockingbirds also have thin bills that are curved slightly downwards.

Males and females are the same in appearance. They are both grayish-brown, but they also have two white wing bars. When they are perched, they may or may not have a visible white patch. In flight, these patches are quite noticeable.

They live in a variety of settings, including backyards, urban parks, rural fields, suburbs, small and large forests, and anywhere that they can find lots of open lands.

Let’s say you live in an area where there are Northern Mockingbirds or Hooded Mergansers. How do you know if you’re hearing a frog, a bird, or a duck?

Second, listen to the other sounds that the creature is making. Are there sounds accompanying the frog-like croak? Mockingbirds and Hooded Mergansers both make additional noises, alongside their frog-like noises.

You can find Hooded Mergansers by hearing their distinguishable frog-like call during the breeding season. You can also find them by watching for their flashy crests as they forage for food in lakes and rivers. If you’re especially attentive, you might see them making their way in and out of their high-altitude cavities in the evening or morning!

However you find Hooded Mergansers, we hope you’re able to enjoy them! These small, attention-grabbing ducks are definitely worth adding to your list of interesting sightings!