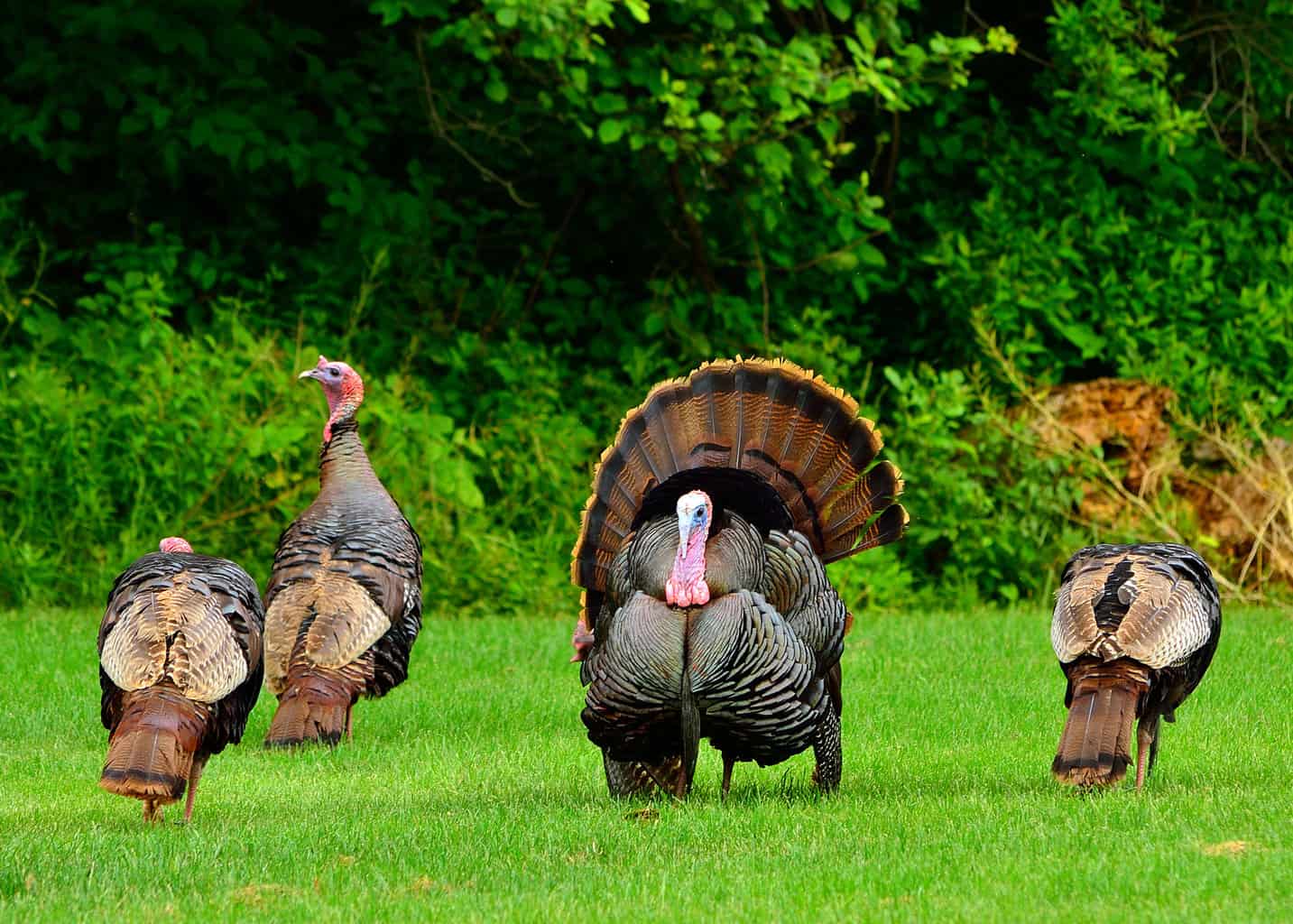 Think about turkeys and many will likely picture the Thanksgiving table. And turkeys are commonly domesticated and reared for meat.

But if you live adjacent to a wooded area with a large yard, you might be lucky enough to spot a wild turkey on your property.

Turkeys are often very easy to identify, even for the most inexperienced birdwatchers.

But some other birds might be mistaken for a turkey on occasion. So, below, we’ll talk about other game birds that look like turkeys that you might see in North America to help you with your bird identification.

Turkeys are large birds in the genus Meleagris which share a common ancestor with grouse, pheasants, and other fowl.

They are in the Tetraonini tribe of the Phasianidae bird family.

The turkey present in eastern and central North America is the wild turkey, Meleagris gallopavo.

This is the ancestor of the domestic turkey, first domesticated over 2,000 years ago.

Turkeys are found in mature forests and woodlands, especially oak, hickory, or beech, interspersed with edges and field systems.

They can also be seen in woodland backyards and along roadways. Once hunted out of large parts of their range, wild turkeys have since been reintroduced and are numerous. They can now occur in every state except Alaska.

Before we take a look at some birds that might be mistaken for a turkey, we first need to look at the turkeys themselves, so we know what birds that look like turkeys will resemble.

As with many large, ground-feeding birds, the turkey has males and females that look very different from one another. The male is larger and much more colorful than the female of the species.

Plump and almost spherical, mature males have black and bronze-green iridescence over most of their bodies, wings with barred black and white plumage, and fanned tails with brownish and black feathers.

Their heads are unfeathered with a blue, greyish, and red coloration. Males also have a fleshy wattle, a snood, hanging down from the top of their beaks.

Females are smaller and more slender, with long necks and legs. They are mostly dark brown, barring an even darker brown.

They, like the males, can also have some green-bronze iridescence on their feathers.

Now that we have a better idea about what wild turkeys actually look like let’s take a look at some other species of bird found in North America that might resemble these birds in some way.

This large grouse lives in mountain forests of ponderosa and lodgepole pine, aspen, and fir. It is the third largest grouse in North America but cannot rival the wild turkey in size.

Dusky grouse have fanned tails when displaying like the wild turkey. But they have more prominent feathers on their heads, unlike the bald heads of the male wild turkey, with a yellow eyebrow that turns red and bare red neck patches visible when displaying. And they have no iridescence.

Female dusky grouse are smaller than wild turkey females and also have shorter legs and shorter tails. They also typically have a more upright posture.

Larger than a ruffled grouse but smaller than a ring-necked pheasant, this bird has mottled brown.

Rufous and black plumage above and barred brown and white underneath. However, the display of the males is very different from the wild turkey, as the male has astonishing orange sacs on the sides of his neck that inflate to create a booming sound.

Females may appear superficially similar to wild turkeys (though smaller) at first. But these birds are found in grasslands, not in the woods like a wild turkey.

This grouse is larger than a ring-necked pheasant but smaller than a wild turkey. Like the male wild turkey, these beautiful birds display a dramatic courtship. But this looks quite different from the displays of the wild turkey.

The females look a little more similar, but the female greater sage-grouse is more grayish brown.

However, these live in different habitats than the wild turkey. As their name suggests, they are found in sagebrush habitats.

The ring-necked pheasant shares a few characteristics in common with the wild turkey… but one of the most obvious differences is that these plump birds are much smaller in size.

Males share the iridescence in their plumage. But the colors and patterns of their plumage are quite different. And they have long thin tails rather than the fanned shape of the wild turkey.

Female ring-necked pheasants are also brown but tend to be paler brown. They are thinner and smaller than wild turkey females and also have longer becks, longer tails, and shorter legs.

Though adult ruffed grouse might be mistaken for a wild turkey female on occasion, they are easy to distinguish since they are less than a quarter the size of the wild turkey and much more compact, with shorter legs, neck, and tail.

The male sooty grouse looks like the dusky grouse when displaying, but rather than having a bare red patch on the side of its neck. It has a yellow patch instead.

As with the other grouse mentioned above, female sooty grouse are smaller than wild turkey females and have shorter legs and tails. They also typically have a more upright posture.

Though the birds mentioned above bear some resemblance to the wild turkey, the wild turkey, especially the male, is not easily confused with any other bird since it is larger, broader, and heavier and has a distinctive head and neck.

So you should find it relatively easy to identify the common wild turkey if it is present in your area.