Woodpeckers in Florida: 10 Species That You May Spot 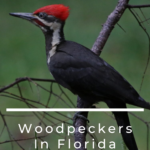 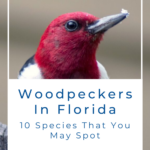 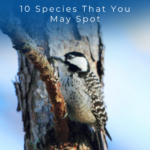 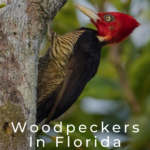 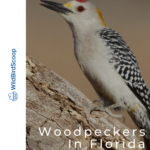 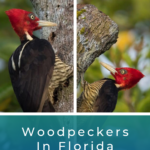 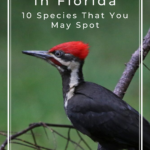 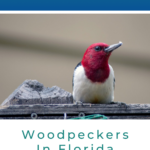 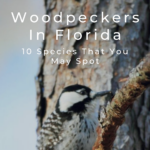 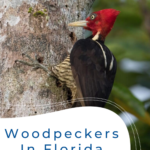 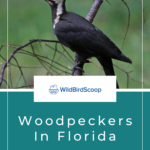 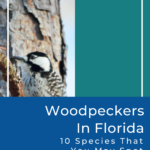 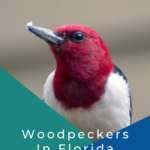 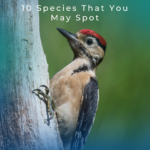 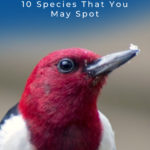 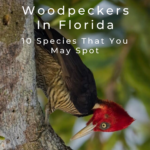 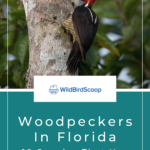 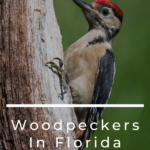 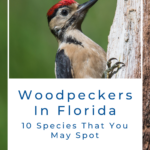 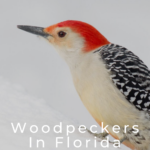 From beaches and museums to golf courses and grand malls, you can never have a dull moment in the tourist hotspot that is Florida.

This is especially true for nature lovers, particularly bird-watching enthusiasts as the state is home to 525 documented species of birds.

If you’re looking for woodpeckers in Florida, below is a list of all the 10 woodpecker species that you might come across while in the Sunshine State.

The Red-Bellied Woodpeckers are among the most abundant types of woodpeckers in Florida with a year-round population.

They’re characterized by their light grey heads and underparts with reddish caps extending from their bin to their nape in males or from the red patch on the nape in females.

They’re remarkably noisy when compared to some other woodpeckers, but that also makes them quite easy to spot even for beginners!

The Red-Bellied Woodpeckers are quite easy to attract into your bird feeder using a variety of nuts as well as sunflower seeds. In winter, you can also add suet to your feeder, which they love!

The Hairy Woodpeckers are among the varieties of the Dryobates genus that call Florida home along with the Red-cockaded and the more abundant Downy Woodpeckers.

The Hairy ones are usually the largest of the three and they usually peck on the largest wood trunks and branches.

It’s usually quite difficult to tell them apart from the Downy. However, they have a relatively large bill, which is as big as their heads and are mostly black and white.

Also, you’d generally find them pecking at the largest trunks, leaving the small ones to the Downy Woodpeckers.

They’re small to mid-sized woodpeckers that stand out as the intermediate between the Downy and the Hairy woodpeckers.

They’re extremely similar in size and have a spotty appearance. However, you’d be blessed if you’re able to find them nowadays because they’re declining in numbers.

You’d find the most like while looking for them in some of  Florida’s National Parks, where you’d be able to find a lot of large pine trees, which are their ideal spot to forage.

Due to habitat loss, they’re the least widespread among Picoides and they’re listed as endangered species by U.S. Fish and Wildlife Service.

Despite being one of the largest Woodpeckers in the world and the largest in the U.S. in terms of size, they’re critically endangered woodpeckers according to the IUCN Red List.

In fact, some experts are debating to this day on whether the Ivory-Billed Woodpeckers are extinct.

However, there are various reports about Ivory-Billed Woodpecker sightings across Florida, keeping in mind that it was believed that there are less than 24 of the rare strain left.

In addition to their huge size, you can recognize the species by their characteristic shiny purplish-black feather coat, which is present in both males and females.

Despite being one of the most common woodpeckers in North America, it’s still overshadowed by the abundance of Red-Bellied and Downy Woodpeckers in Florida.

The Pileated Woodpecker was the inspiration for “Woody Woodpecker” and you can find it just about anywhere from open fields to heavy forests because they’re highly adaptable to their habitats.

The Pileated Woodpecker’s behavior is usually attributed to the habitat around them. In other words, those who live around residential areas are more adapted to humans and are easily attracted to bird feeders. On the flip side, those who live out in the wild are relatively shy.

The Downy is the smallest and one of the most abundant species of woodpeckers in North America.

They have black and white feather coats and are easily attracted to bird feeders by feeding them anything from nuts and suets to sunflower seeds.

However, Don’t let their small size trick you. They’re extremely loud peckers and can even beat on metals.

Not only that, but they’re known for wandering frequently around residential areas and even nesting and beating in holes and crevices in houses due to their small size, which can cause some structural damages to houses in their range.

Yellow-Bellied Sapsuckers occasionally have a yellow tinge in their bellies, hence their name. However, they’re mostly covered with black and white feathers.

The males are characterized by having a bright red crown and neck while females will only have the red crown.

They have a characteristic thumping pattern that feels like rapid drumming followed by slow ones that retain a rhythm.

These woodpeckers are rarely drawn to bird feeders but you might find them more often in woody areas around suburbs, parks, and open fields.

As the name suggests, the Northern Flickers originally live in the Northeast and Canada but might migrate during the winter to southern states like Florida.

They’re the only species of woodpeckers that would feed on the ground. Northern Flickers are known for eating a wide range of foods

Their diet may include nuts, fruits, seeds, and berries. However, they mainly hunt for insects, with ants being their primary source of food.

You can easily spot in the parks as well as in the wild because, unlike many other woodpeckers, they’re characterized by their unique brownish color with a black patch on the breast.

This means that you can draw them to your feeder with nuts, seeds, and berries. However, they mainly hunt for insects, with ants being their primary source of food.

Red-Headed Woodpeckers are one of the most beautiful birds that are permanent residents of Florida. You can easily identify them from their heads that are entirely covered with red feathers while having a bright white stomach.

However, juvenile Red-headed Woodpeckers have brown feathers instead that turn red as they grow up. These features are found in males and females, so they stand out pretty easily among other birds.

You can find them in open fields, parks, as well as bird feeders. Back in the day, it was quite easy to spot these birds in North America in general. However, they’re currently declining in number, so they’re downlisted to “nearly threatened” by the IUCN.

In addition to regular pecking methods, They’re known for catching insects in the air and ground.

Additionally, they eat fruits and nuts, so it’s easy to attract them to your bird feeder with various types of foods!

Ending the list with the Golden-Fronted Woodpecker, which has quite some similarities to the northern flicker in terms of looks.

These woodpeckers are mainly from Texas and Oklahoma. However, they’re rarely spotted in Florida too.

That’s why they are listed by the Florida Ornithological Society as accidental species but are yet to be listed in the official list of the state.

Both males and females of the Golden-Fronted Woodpeckers are characterized by having barred black and white backs with a tan breast.

You can distinguish between them and the Northern Flickers because they don’t have the black patch on the breast or the spotting below.

These woodpeckers also have bright yellow spots above the bill and on the nape. However, the males also have an extra red crown.

With that said, you now have a complete guide that walks you through all the 10 different species of woodpeckers that you can spot in Florida.

If you’re planning to visit Florida soon, always remember to look up and check the trees to observe the true beauty of the Sunshine State.