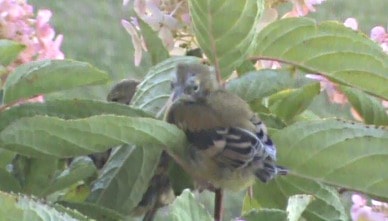 Please see the videos to watch the story as it happens!

Full fledge day came on a day I was off. Just the day before I had filmed these four youths jostling for a space in their nest, which they barely could squeeze into. These little songbirds
just didn’t fit anymore.

I really would not have guessed that day, that the next day would be
their last day at the nest site. They just didn’t seem mature enough.

It
would be empty from that day forward and we certainly felt the
“emptiness”. Full fledge day is the next video along the path of the
journey for the Goldfinch chicks. 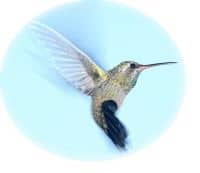 I had heard a continuous din of Goldfinch calls that morning
(you will hear this on the video) and wondered what all the noise was
about. I soon realized it was Mom calling her children to leave their nest area and join the unknown world around them. I could not imagine what this must have been like for them. But their nervous agitation was obvious.

When I first looked out about 8am I could only see 3 chicks in the bush. One of the chicks had
left the nest and the hydrangea bush completely. It was on its own for the first time. Probably staying close by so it could be fed by Mom and learn from her for a little while longer.

I peered into the hydrangea hoping to see what the rest of the family was up to. I noticed one sitting on a branch of the hydrangea bush by itself.

It was an exciting morning not just for them but for us too. I have to admit I questioned the mother’s actions. I did not think they looked mature enough to leave with their downy feathers still sticking out above their eyes giving them a heavy eyebrow look.

Means that a young bird has reached full development for flight. When all their feathers have reached mature adult plumage.

What Happened Later In The Hydrangea?

Later that morning two more chicks were out of the nest and sitting
on branches. They were preening and fluttering about from one branch to
another very nervously. The mother came and fed one of the chicks twice.

At one point two of them were huddled together and it looked as though they were feeding each other. Giving each other comfort at this uncertain time of their life turning upside down.

All morning long, the mother was calling from a spot nearby coaxing them to make the big leap into their next stage of life.

What About the Last Two Goldfinch Youths?

When I checked things out about an hour later there were only two chicks left. Perched on the top branches of the hydrangea looking about nervously and hopping from branch to branch. The last two gave us the
definite impression that they really did not want to leave “home”.

What an Empty Nest Left for Us?

Gradually all of the fledglings had
been coaxed from the nest by their Mom’s calls, to take their first flight.

Fledge day was a bittersweet day in our home. First of all my husband
and I were happy to see the four babies mature and do what they were
supposed to do and enter the adult world by taking flight to begin their
new life. But, at the same time, we were sad that we would not be able
to look in on their fascinating lives anymore.

I hope you enjoy this peek into the usually private lives of wild birds growing up.

I have broken my footage of “Fledge Day” into 4 parts:

Here
is the last video I took of the Goldfinch family. It is a series of
short clips I took of their first landing spots after leaving the nest.

You can see their fear and excited anticipation at what may come next in this stage of fully fledged.

The nest is empty now; it had served its purpose well. The male and
female Goldfinch had meticulously put it together with great care to
make it just right to cradle their precious eggs and then the newly
hatched chicks.

The chicks grew fast and were kept contained within the warm soft confines of the nest walls.

At the beginning the nest seemed so small. When the eggs were laid they were almost lost in the size of the nest.

But in a matter of weeks the nest was full to over flowing with maturing songbird bodies, always jostling for space.

It was a privilege to have witnessed the entire story first hand and I am so grateful to have had a video camera to capture the whole story and the final fledge day. 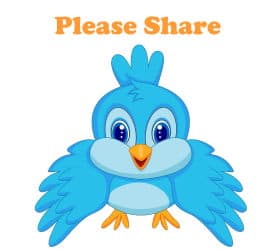