Minnesota is the 12th largest state in the United States, found in the upper Midwest with a highly diverse geography. The landscape consists of four ecological provinces, the eastern broadleaf forest, the southwestern prairie parkland, the tallgrass aspen parkland, the northern Laurentian mixed forest.

Roughly one-third of the state is forested, and it has over 14,000 bodies of freshwater. Even though much of the country has undergone logging in recent years leading to habitat loss, the state is still teaming with a wide variety of plants and wildlife.

Minnesota has 246 different breeding bird species, several of which are incredibly rare, and you might not see them every year in Minnesota. Among these are the hummingbirds.

There are seven different hummingbird species that either visit Minnesota regularly or are in the categories of hummingbirds known as accidental or rare visitors. Of the seven, only one is a year-round/native hummingbird to Minnesota, another is a common resident/accidental visitor, and the remaining five are rare/unintentional visitors. 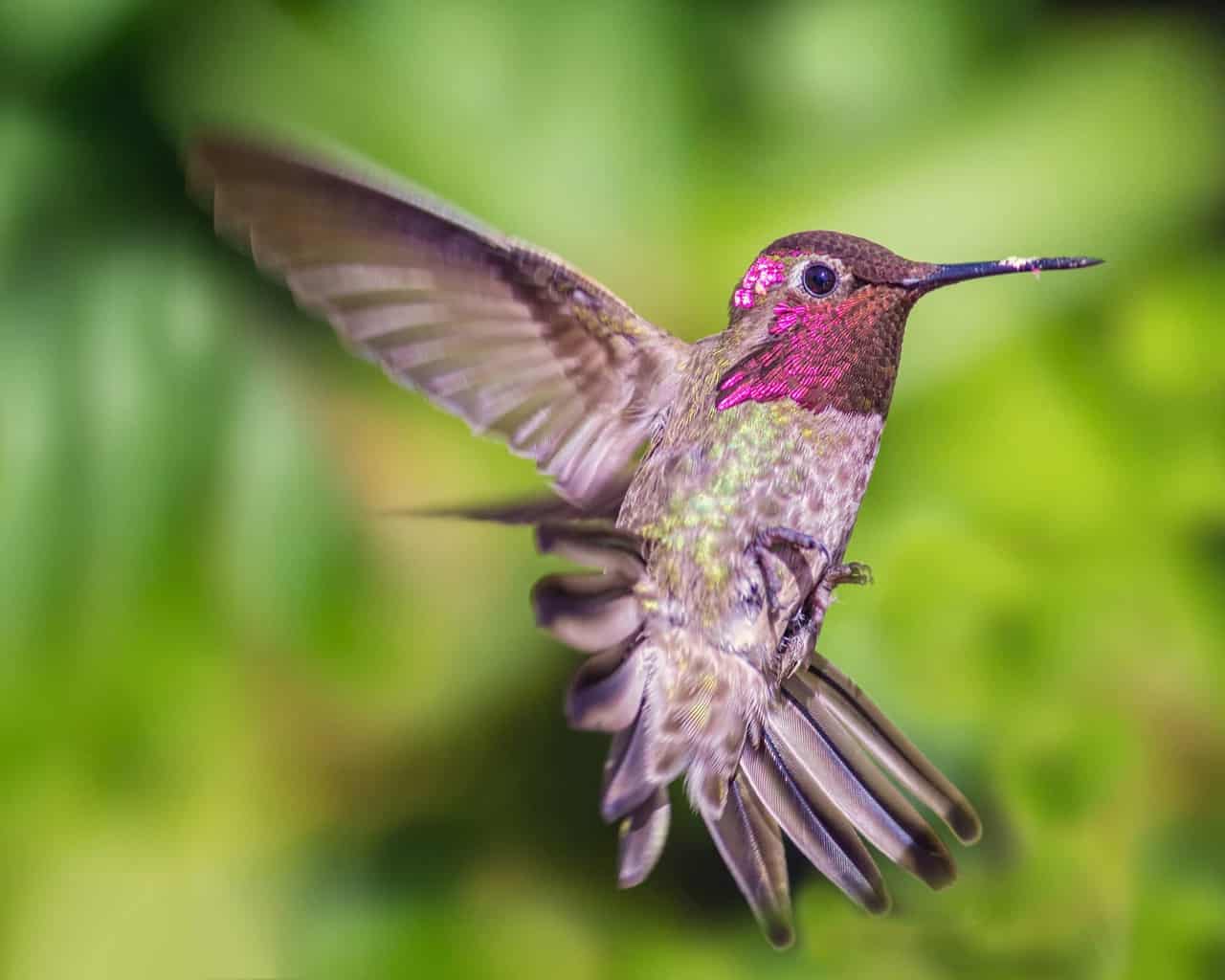 Overall the Red-throated Hummingbird has a metallic green back and grayish-white underbelly; their wings are almost black. They have slender, straight, long bills, measuring 0.79 inches.

Males have a ruby-red throat patch, white collar, and forked black tail. On the other hand, the female ruby-throated hummingbird has a notched tail banded with black, white, and grey-green and a throat that is either plain or lightly marked with stipples or dusty specks of color.

The Ruby-throated Hummingbird is a native of Minnesota, though not a year-round resident, usually arriving at the beginning of May and leaving at the end of September.

They have a unique migration pattern, flying non-stop for 500 miles to wintering grounds in Central America, Florida, and Mexico, usually returning there around July.

Like many other kinds of hummingbirds, their food source is a combination of nectar, spiders, and insects. They also prefer orange, bright pink, and red tubular flowers as their primary nectar sources.

Rufous hummingbirds are named for their rufous (rust-colored) face, tail, and flanks, most noticeable among the males. They also have a white breast, and a red-orange colorful gorget (throat feathers), with green feathers on their backs.

The females have less of a display in color with throats having white, orange, and green feathers. They have a dark tail with a rufous base and white tips. The male is fractionally smaller than the female.

The Rufous Hummingbird is an accidental visitor to Minnesota. Arriving in the first week of May, they will leave around the end of September.

The Rufous Hummingbird has a reputation of being a fearless, aggressive species known to chase other species, larger birds, or rodents in feeding territories in defense of flowers and life-nourishing nectar feeders.

They have exceptional flying skills, flying around 2,000 miles during their migrations through the Rocky Mountain ranges during May – September to take advantage of wildflower season. They like to winter in the Mexican state of Guerrero.

The male Anna’s hummingbird is the only North American hummingbird with a red crown; they have a reddish-pink throat, green color on their backside, and a primarily greyish underside.

The female Anna’s hummingbird has a more faint color palette with a dull greyish-green crown, smaller red throat feathers, a grey belly and chest, grey throat with some red in it, and a rounded tail with white-tipped outer tail feathers. They are also a bit smaller than the males.

Anna’s Hummingbirds are a medium-sized hummingbird species named after Anna Massena and are another rare or accidental hummingbird to Minnesota. There have only been three documented cases of one in the state, all of them between October to December.

Anna’s Hummingbirds are one of the largest hummingbird species in the United States, and they are also the most vocal, eager to share their beautiful voice. They are also highly territorial, with the males making elaborate dives at other birds and sometimes passing humans to defend their territory.

They used to be California natives, but they have managed to develop a wide habitat range and spread eastward and northward due to their adaptability, chasing after all new types of exotic flowers and native plants.

Adult Calliope Hummingbirds have glossy green backs and crowns and creamy white underparts, with relatively short tails and beaks. On average, as with many species of hummingbirds, the females are somewhat larger than the males.

Female hummingbirds and juveniles have dark streaks on their white throats, a pinkish wash on the flanks, and white tips on their dark tails. You can identify a young Calliope Hummingbird by the ridges that are present on their upper beaks.

Documented sightings of this rare accidental vagrant to Minnesota are from November to December. It is the smallest bird in North America, and when it comes to long-distance travel, it is the smallest migrant bird in the world.

They travel over 5000 miles during their migratory flight, from their nesting destinations in far northern British Columbia, Canada, and the western coast of the United States’ high elevations during the breeding months, down to the warmer habitat of southern Mexico in the winter.

One way to spot this tiny hummingbird is to try and find its favorite perching spot on the breeding grounds. Keep your eye on the tops of alder or willow tree branches that are bare and sticking out from the rest. They have an excellent memory, and often, these beautiful birds will return to the same spot habitually.

The adult males’ most distinguishing feature is his purple, iridescent throat and cap. The female does not have a flashy throat patch or cap; she has a primarily white gorget.

With only a few recorded sightings in the state, Costa’s Hummingbirds are rare accidental visitors to Minnesota.

The Costa’s Hummingbird is the smallest bird in the United States. They fly around 5,000 miles during their migrations each year, migrating from the Pacific Coast in the spring and returning to Mexico for the winter.

Although they are small birds, they are territorial and it’s a common sight to see one occasionally chase birds as large as Red-tailed Hawks away from their territories during the breeding season.

The adult Green-Violetear hummingbird has an emerald green back and a glittering violet ear-patch on the sides of its neck. It has a brilliant green belly, a twinkling green chest, and a metallic blue-green tail, with the central feathers being slightly bronzer.

The tail is slightly notched and square, with a thick dark blue band at the end. Females have somewhat duller plumage than the males, are smaller, and have a narrower violet chin band.

They are rare, accidental vagrants to Minnesota, with only one or two documented cases, as they wander north to the United States, sometimes even as far as north as Canada.

The Green Violetear is also known as the Mexican Violetear. They occupy the highland from northern Venezuela to south-central Mexico, to western Panama, to Bolivia.

Green Violetears prefer habitats of borders near water and canopies of lower and subtropical forests, secondary scrub and woodlands, and gardens and clearings in the subtropical zone, their food source being primarily nectar and insects.

The adult male has a green-bronze chest and metallic green throat, with a greyish underbelly. He has a purple crown and forehead with a white spot behind his eye, and his back is dark green/bronze, becoming bronzer on his black-tipped tail.

The female is duller overall, with a pale grey belly, a bronze-green back, and a rounded tail with white-greyish tips. She has a white stripe behind her eyes like the male and faint streaking on her grey throat.

Rivoli’s Hummingbird is a rare accidental vagrant to Minnesota. In the United States, the highest concentrations of this dark hummingbird are in southwestern New Mexico and southeastern Arizona.

Rivoli’s Hummingbird had a few name changes, changing from Rivoli’s to Magnificent in the 1980s and then changing back to Rivoli’s in 2017 when the species split in two, with the other species being ‘Talamanca or Admirable Hummingbird.’

Rivoli’s Hummingbird is one of the two largest hummingbird species north of Mexico, and you can use their size to identify them.

Seven different hummingbirds visit Minnesota, and only one of these is a native to the state. Another is a typical accidental visitor, and the other five have only been spotted in Minnesota a handful of times.

Other than hummingbirds, Minnesota is teeming with wonderful birdlife, and if you keep a lookout, you can spot some different fantastic species. Read this list of 25 other bird species you can find in Minnesota to learn more about the state’s special bird populations.