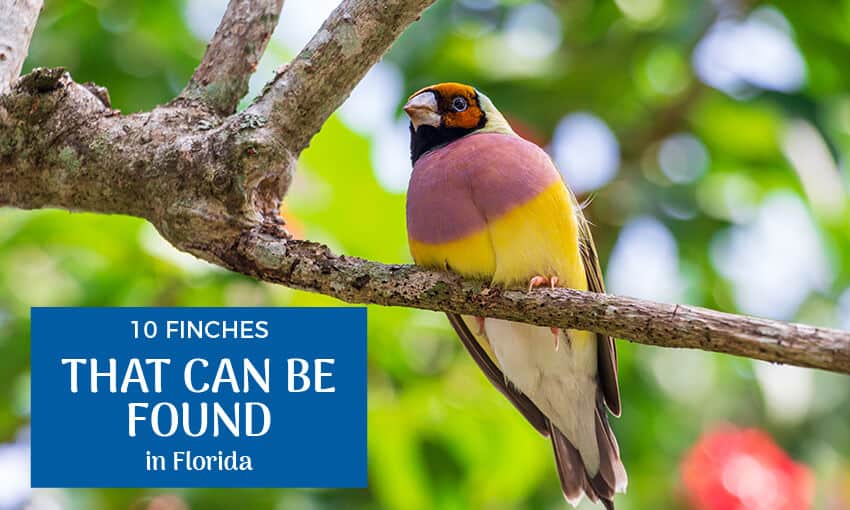 10 Finches That Can Be Found In Florida

Any discussion of finches requires careful definition of terms. True finches are small to medium-sized passerine birds taxonomically classified in the family Fringillidae. Additional “finch-like” (and described as “finches,” e.g., in some earlier Peterson Field Guides) are also included in the families Cardinalidae and Thraupidae.

All are “Passerine” birds that have feet adapted for perching, with three toes pointing forward, one backward. These three families are grouped under the superfamily, Passeroidea.

It should be noted that the scientific names shown in this discussion may not agree with many common wild bird guides. Ornithologists have disagreed upon, and continue to debate, the exact relationships (and therefore generic names) of many birds in this group.

The names shown appear to be the currently accepted scientific names. Seven species of “finches” may be expected in Florida, either as residents or seasonal transients (see Table). An additional three finches may possibly appear in Florida as transplants or accidentals.

All of these are small to medium-sized, usually colorful birds with stout conical bills for eating seeds.

The American Goldfinch is the most common and widely dispersed North American finch ranging from southern Canada south into Mexico,

Description: During the breeding season, the male American Goldfinch has a bright yellow body, black cap, and black wings with white wing bars and yellow shoulder patches. The rump is white, and the tail is black and white. In the winter, the male’s bright yellow becomes duller, resembling the female’s color.

The female has a similar pattern, but the upper parts of the body are more dusky olive in color. The bill on both is small, conical in shape, and pinkish in color. Both have black eyes and pinkish legs and feet.

Juveniles have brown upperparts with cinnamon-buff wing markings and rump. Underparts are pale yellow. Wings and tail are blackish.

Additional Information: Gold finches preferred food is thistle (Nyjer) seed, and may be seen feeding in gardens, pastures, and orchards. They will flock to commercially available or Nyjer seed sock feeders.

Around the feeder in in small flocks, their song is a lively series of trills, twitters, and tweets.

Pine siskins are small birds, about the size of the American goldfinch that are found across the United States and into Canada.

Description: Adults of both sexes are brown on the upperparts and pale on the underparts, with distinctive heavy streaking throughout. The short tail is forked. Their bills are conical, but more elongated and slender than other finches.

Range: The Pine Siskin’s breeding range extends across Canada and into Alaska, and across the western mountains of the United States. Their winter range includes all the southern tier states, including all of Florida.

The purple finch was formerly included with the rosefinches of Eurasia in the genus Carpodacus; however, the three North American species are not closely related to the Old World rosefinches and have been moved to the genus Haemorhous.

Description: Not truly purple, the male purple finch is a rosy/raspberry red color around the head, breast, and back. Adult females have light brown upperparts and white underparts with dark brown streaks throughout; they have a white line on the face above the eye. The juvenile is similar to the female. Adults have a short forked brown tail and brown wings.

Range and Habitat: This common bird is found throughout Canada and large areas of the USA. They may be seen in coniferous or deciduous/coniferous forest edges during the breeding season. Their winter range extends south to northern Florida, including the panhandle.

Additional Information: The purple finch population has been displaced in the East by house finches and house sparrows.

Purple finches are fond of sunflower seeds, millet, and thistle and may visit feeders stocked with small seeds.

Longevity: Up to 11 years

Originally native to western North America, the house finch has been introduced to the eastern half of the continent.

Description: This is a moderately-sized finch. Adult males are dull brown across the back with reddish head and neck. The reddish color varies with the seasons and diets of the birds. Adult females have brown upperparts and streaked underparts. Adults have a long, square-tipped brown tail.

Their song is a rapid, cheery warble or a variety of chirps.

Range: These birds are usually permanent residents throughout their range; some northern and eastern birds migrate south. Their breeding habitat includes urban and suburban areas across North America from southern Canada into Mexico.

These birds were trapped and sold illegally in New York City as “Hollywood Finches.” To avoid prosecution under the Migratory Bird Treaty Act of 1918, vendors and owners released the birds. They have since become naturalized; in largely unforested land across the eastern U.S., where they have displaced the native purple finch and even the non-native house sparrow.

The indigo bunting is a small seed-eating bird in the cardinal family, Cardinalidae.

Description:  Described as a “small finch” (Peterson 1980), the adult male appears mostly a vibrant cerulean blue. Only the head is indigo. The wings and tail are black with cerulean blue edges. In fall and winter plumage, the male has brown edges to the blue body and head feathers, which overlap to make the bird appear mostly brown. The adult female is brown on the upperparts and lighter brown on the underparts. It has indistinct wing bars and is faintly streaked with darker markings underneath. The immature bird resembles the female in coloring. The feet and legs are black or gray.

Look for Indigo Buntings in weedy or agricultural fields and shrubby areas near trees or foraging for seeds and insects in low vegetation.

Additional Information: Indigo buntings often migrate by night, using the stars to navigate. Like other finches, they are attracted by Nyjer seed feeders.

Longevity: Up to 10 years

The male painted bunting is often described as the most beautiful bird in North America and as such has been nicknamed “nonpareil,” or “without equal.”

Description: The multi-colored male painted bunting displays a dark blue head, green back, and red rump. Despite its colors, the broken pattern may make it difficult to spot. Females and juveniles are green and yellow-green. Once seen, the adult female is still distinctive since it is a brighter, truer green than other similar songbirds.

Range: Painted buntings breed in the coastal southeast and in the south-central U.S. They have been caught and sold illegally as cage birds, particularly in Central America.

In the east, the species breeds in maritime hammocks and scrub communities. It is also found in gardens with dense, shrubby vegetation. Its south and southeast breeding range includes northern Florida and coastal Georgia.

Painted Buntings eat seeds, particularly in midsummer after the breeding season is over. It is then they are more likely to visit a bird feeder in a yard with low, dense vegetation.

The evening grosbeak is “a chunky, short-tailed finch the size of a starling.” (Peterson, 1980)

The Evening Grosbeak male has dusky to golden yellow body feathers. The prominent bill is cone shaped. The male sports a gold band across its forehead and over its eyes. The tail and flight primaries are dark black.

Adult females have a dusky silver-grey body that is darker on her back, lighter on her breast and undersides. The tail and wings are black with white patches.

Immature birds are similar in coloration to the female, but with dark shoulder patches.

RANGE: Evening Grosbeak is primarily a northwestern bird in North America. However, in winter they may migrate as far south as the northern counties in Florida. During migrations, they may travel in flocks of several hundred birds. Food shortages in their northern ranges may drive the birds farther south.
Additional Information: Evening Grosbeak is a noisy bird and with numerous calls and sounds.

During the winter, evening grosbeaks will occasionally visit feeders stocked with sunflower seeds.

The European goldfinch is a small finch, native to Europe, North Africa, and western and central Asia.

Description: The colorful breeding male has a red face and a black-and-white head. The back and flanks are buff or chestnut brown. The black wings have a broad yellow bar. The tail is black, and the rump is white. Males and females are similar, but females have a slightly smaller red area on the face.

Additional Information: A colorful, attractive finch, it has been trapped and bread in captivity and has been widely introduced around the world, including the United States. Many have escaped or been released across the country and there is a breeding population in Wisconsin. Whether escapees or released, they may occasionally find their way into view of a bird-watcher binoculars, including in Florida.

The Cuban Bullfinch is found in Cuba and the Cayman Islands. Its natural habitats are subtropical or tropical moist lowland and mountain forests of Cuba. Recent studies have shown it to be part of the tanager family, Thraupidae.

Description: Color ranges from black to gray, depending on location and sex. Note the large, stout bill and the white slash along the front of the folded wing. No similar species occurs in its range.

Its song is a buzzy trill that drops in pitch and is followed by thin “tsi” notes.

The Cuban bullfinch is listed by the Tropical Audubon Society as “regular rarity” in South Florida.

Description: This bull finch has dark gray or black body, accented by an orange-red eyebrow, throat, and vent.

Range: The Greater Antillean bullfinch is found in the Bahamas, the Dominican Republic, Haiti, Jamaica, and Turks and Caicos Islands.

Additional Information: They prefer subtropical or tropical dry and moist lowland forests and shrubland. Although they are common on the Bahamas islands, they have not yet been reported in the state of Florida. It seems like that one will eventually make it to the Florida Keys—and be identified as a vagrant.

The Greater Antillean Bullfinch (Loxigilla violacea) is found in the Bahamas, the Dominican Republic, Haiti, Jamaica, and Turks and Caicos Islands. They inhabit subtropical or tropical dry and moist lowland and montane forests, shrubland, as well as heavily degraded former forest.

and Fun Facts About Indigo Buntings

I grew up on a farm in Virginia, surrounded by creeks and marshes, abundant with all manner of living things. The farm was rich in birdlife, from nesting eagles and fish hawks, to chickadees and wrens nesting around the house. My mother, a teacher, had several bird books and we often sat in the yard or took walks identifying each one we saw. She also made sure I knew about the natural history of each bird—what it ate, where it nested, if it was a seasonal migrant, etc. She instilled an interest in birds—actually all creatures—that has persisted throughout my life, travels, and writing. The farm and my mother’s influence led me to degrees in biology and environmental sciences, after which I became a writer.