A Bird That Sounds Like a Baby Crying? The Curious Lyrebird 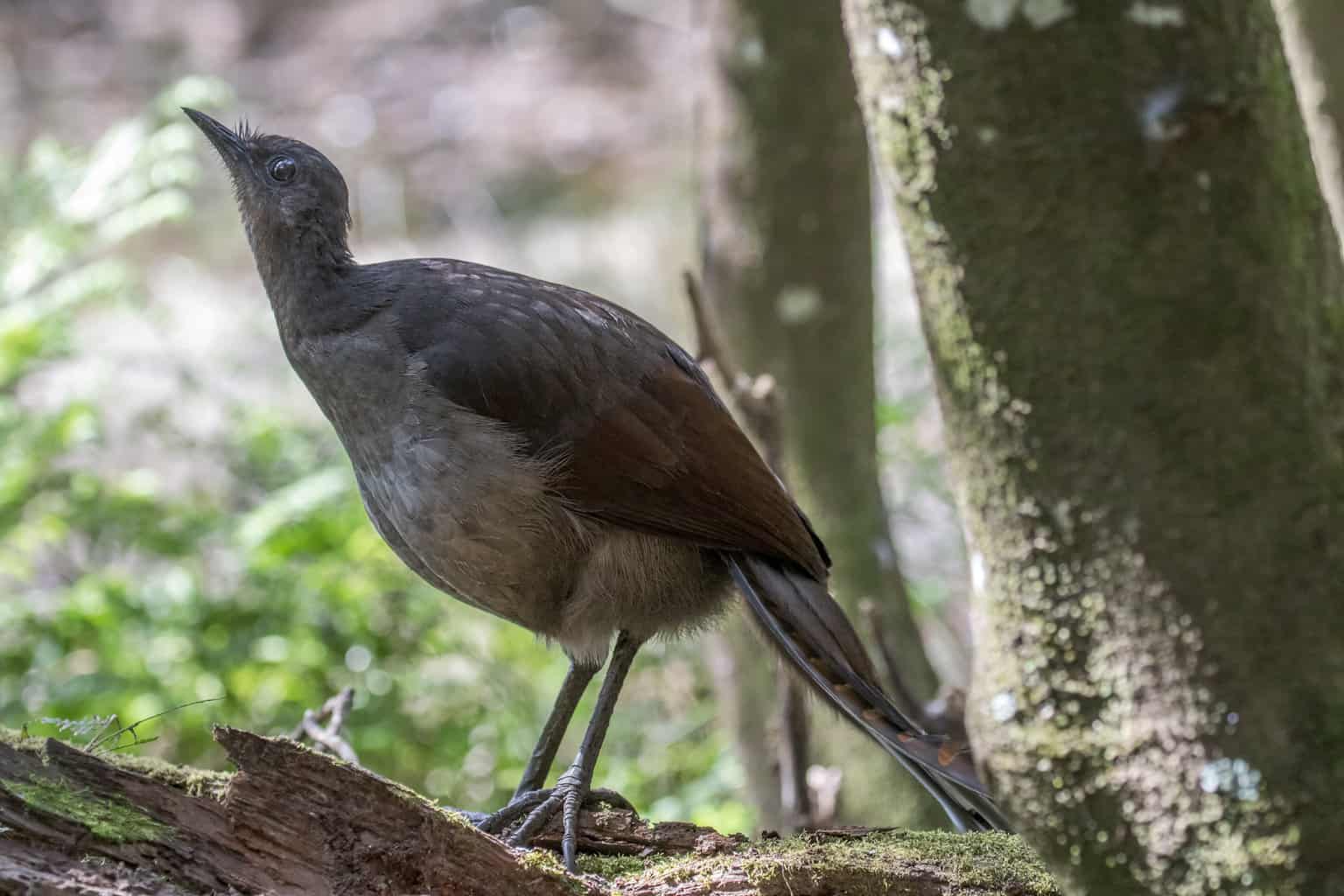 Lyrebirds are gorgeous creatures with an unusual trait–they vocalize like human babies!

These aren’t the only birds that make unusual sounds, but their cry may be the most troubling to hear if you don’t know what it is!

Let’s take a closer look at the lyrebird and its unique call.

There are two kinds of lyrebirds: the Superb lyrebird and Albert’s lyrebird. Both are found exclusively in Australia and are the only members of the Menura genus, which is part of the Menuridae family.

Both birds are incredible mimics that can imitate the sounds of other birds, animals, and even human activity.

Superb lyrebirds are among the world’s largest songbirds.

Their coloring is mostly pale grayish-brown, but their wings are reddish-brown. The incredibly long, stunning tail of a male Superb lyrebird is comprised of three types of feathers: two lyre feathers (lyrates) in the middle, two medians on the outside, and twelve filamentaries that fill the space between them.

They use these feathers in an elaborate courtship display. Check out this video of the Superb lyrebird’s feathers in action!

Albert’s lyrebird has a long tail, too, but it’s not as ornate as the Superb lyrebird’s. Sometimes, female and juvenile Superb lyrebirds are mistaken for Albert’s because of the differences in their tail feathers.

Like the Superb lyrebird, Albert’s lyrebirds are found in the rainforest, where they forage for food.

The easiest way to differentiate between an Albert’s lyrebird and a Superb lyrebird is to pay attention to the coloring: Albert’s are dark, rusty brown instead of gray.

Both varieties of lyrebirds are incredible mimics, but the Superb lyrebird is the more impressive of the two.

The male uses his complicated voicebox (also called a syrinx) to mimic and imitate countless other birds and animals from its habitat. The male picks up some of the sounds from his parents, who have had sounds passed down to them for generations. Other sounds are copied from animals and birds he has encountered or heard in his lifetime.

An interesting story about lyrebird mimicry involves their introduction to Tasmania. Tasmanian Superb lyrebirds can still mimic the sounds that their ancestors learned from birds on the Australian mainland, even though nearly 100 years have passed since their arrival.

Unique Sounds from the Superb Lyrebird

Here’s a list of some of the unusual sounds that can come from a Superb lyrebird’s complicated syrinx:

Lyrebirds really are capable of sounding like screaming babies!

The idea of walking through the rainforest and hearing the sound of wailing, crying baby in the distance is a bit eerie, isn’t it?

Lyrebirds will mimic just about anything they encounter, so a lyrebird that lives in proximity to children and families has the potential to develop the ability to mimic a crying baby.

Perhaps the most famous example of a Superb lyrebird crying like a baby is Echo, who lives at the Taronga Zoo in New South Wales, Australia.

When you hear Echo crying, there is absolutely no question: that sounds exactly like the wail of a screaming infant!

Echo was hatched in 2014 and began trying out crying sounds around 2019 or 2020. Presumably, he developed this sound by listening to the crying of babies who were visiting the zoo. Even though Leanne Golebiowski, the supervisor of the Taronga Zoo’s bird unit, hopes that a zoo is a happy place for children to visit, any place that welcomes lots of children and families likely has its share of crying babies!

In an interview with The Guardian, Golebiowski said that Echo also makes two other noteworthy sounds: a power drill and a fire alarm.

Perhaps Echo’s descendants will learn these sounds from him and pass them down from generation to generation, even if they don’t live in a zoo where they regularly hear fire alarms and crying babies.

Why Do Lyrebirds Mimic So Many Sounds?

This is a great question–why do lyrebirds mimic so many other creatures? What is the evolutionary benefit of being an excellent mimic?

There are a number of scientific theories about why some birds mimic, and others don’t. One popular and widely accepted theory is that birds who use a lot of mimicry are able to find a mate more easily. Another theory is that birds will distract potential predators by sounding like something they find scary, like humans or larger, more dangerous birds.

Are There Other Birds That Sound Like a Baby Crying?

While the lyrebird has the most baby-like crying sound, some other birds may give you the same eerie feeling if you hear them calling in the forest.

What Kind of Owl Sounds Like a Baby Crying?

Barn owls make a loud shrieking sound, but it’s unlikely to be confused with a human baby. If they only emit one loud shriek, you may be uncertain enough to wonder what you heard.

What Other Australian Birds Can Mimic a Crying Baby?

Although lyrebirds are the most prominent baby mimics, Green catbirds also have a somewhat infant-like cry. Green catbirds are native to Australia. Like lyrebirds, they live along Australia’s east coast, sharing much of the same territory.

Do Parrots Ever Mimic Crying Babies?

Household pet birds are also well-known mimics, and some parrots and pet birds that have been around young children will make similar sounds!

In this video, a parrot cries like a child because, according to his owner, the bird wants attention. He can probably get that attention, too, because it sounds like someone put a baby in an animal cage!

Did You Just Hear a Lyrebird?

Unless you are in Australia, you didn’t hear a lyrebird in the wild. However, if you are in the rainforests of Australia’s east coast, you might be able to hear lyrebirds and their fascinating sounds!

Unfortunately for most folks in North America, your best bet for hearing a lyrebird that cries like a baby is to go visit Echo at the Taronga Zoo. The good news is that Superb lyrebirds may live up to 20-30 years, so Echo is still pretty young for his species! Perhaps you’ll get a chance to hear this interesting specimen in person someday!