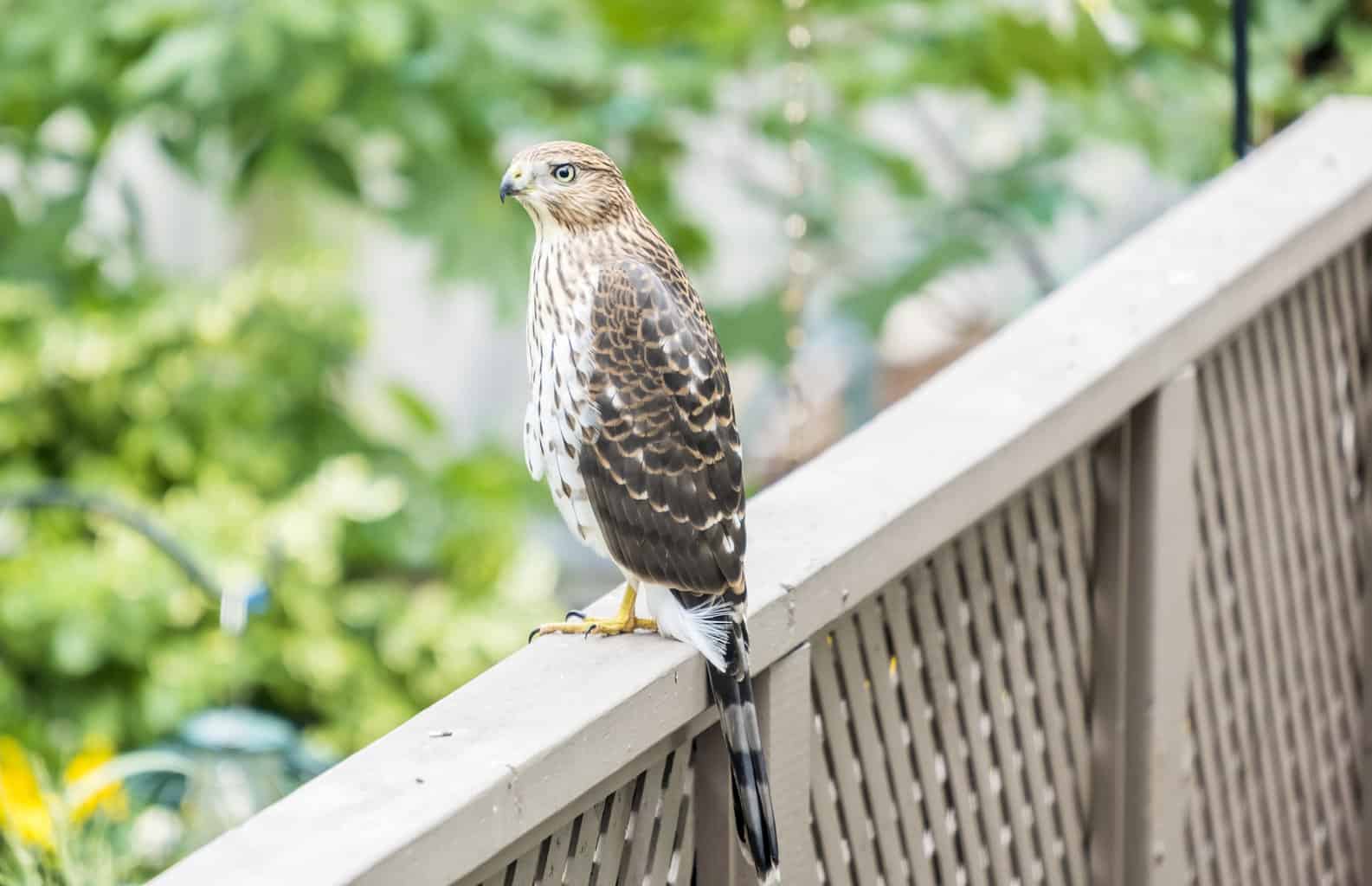 Backyard birds face threats from lots of predators, both natural and unnatural. Among unnatural predators, cats are the most harmful to backyard bird populations, killing billions of birds per year.

But natural predators can certainly be a serious threat to the songbirds we all enjoy as well. How can you protect backyard songbirds from these predators, and ultimately, should you?

Birds of prey such as hawks are natural predators and are bird species that threaten songbirds in large numbers. Let’s take a look at what you can do to protect songbirds from these formidable hunters.

Hawks And Other Birds of Prey

Hawks are one bird that some bird watchers do not want to see in their backyards. Others are happy to see them, as these large birds can be exciting to spot and observe as they hunt.

A hunting hawk setting up shop in your yard can quickly put a dent in bird numbers. The sharp-shinned hawk, for example, eats a diet of about 90 percent songbirds, largely sparrows, warblers, and thrushes, according to the Cornell Lab of Ornithology.

During nesting season, sharp-shinned hawks feed their young the nestlings and fledglings of other birds. This is the circle of life, ultimately, but backyard birds can also be put at a disadvantage by bird feeders, so there are things you can do to help.

Hawks are known to stalk a bird feeder, stationing themselves on a fence post or tree branch until birds return to the feeder.

If a hawk does this to one of your feeders and you want to protect the songbirds, take down your feeders for three or four days. This is definitely the best way to protect backyard songbirds from a hawk that’s hunting at your feeder, as it spreads birds out from one central location.

Hopefully, the hawk will move on to other hunting grounds. When you put your feeders back up in a couple of days, the songbirds will likely return.

You could also choose not to protect birds from a hawk stalking your feeder. Hawks have to eat too, after all.

Ultimately, it’s a personal decision for which there is no wrong answer. Just like you’ve made the decision to feed the birds in your yard, you can also make the decision not to feed certain birds, including hawks. If you enjoy watching the songbirds and don’t want to increase their chances of being killed by a hawk, take down your feeders.

Remember, native birds are protected by the Migratory Bird Treaty Act, so killing or capturing birds of prey or disturbing active bird nests is against the law.

A hawk or eagle circling high in the air is a common sight. Hawks have great eyesight, which they use to spot prey.

Red-tailed hawks, for example, have eyesight eight times better than humans, according to the National Audubon Society. This enables them to see a mouse on the ground from 100 feet in the air. It also allows them to see small birds such as the ones at your feeder.

With this in mind, providing cover around or on top of your bird feeders is one way to keep songbirds safe from hawks.

Placing your backyard feeders under nearby trees or close to bushes can give birds a sense of security, allowing them to scope out any potential threats before they stop for food and escape quickly if a hawk does swoop.

You can also place your feeders under something to make it difficult for hawks to see their prey from above. Consider hanging feeders from a tree branch or building a roof structure to keep feeders hidden from above. As a bonus, it will keep bird seed dry for longer, decreasing how often you need to change out the seed in your feeder.

Other Ways of Deterring Hawks

If you take down your bird feeders but a hawk is still present, you may have one living and/or nesting on or near your property. If they’re nesting nearby, it may not be possible to get them to move.

You can still try to get them to hunt elsewhere by scaring them off, although you may find infrequent or varied success. Still, some of these ideas may be worth a shot.

Wind Chimes or Other Noisemakers

Hawks (and other birds) may be scared away by noises if they associate them with threats such as humans.

For sounds like wind chimes, they will likely get used to them fairly quickly, but it might be enough to move the hawk to another location for its regular hunting.

Move the noise-making device around regularly so that predators don’t become used to seeing it in one location.

Scarecrows or Other Decoys

Decoys are one of the easiest things you can try, though they may not work as well as you hope. Birds can become accustomed to decoys pretty quickly, rendering them useless.

If you decide to give a decoy a shot, consider a scarecrow or even an owl decoy. Keep in mind that these decoys may also deter songbirds.

If you find some success, but it fades as time goes on, move the decoy around. It’s possible that the hawk may just have gotten used to the decoy in that location and stopped seeing it as a threat.

Raccoons, squirrels, rats, snakes, and other animals can also be a threat to backyard birds, especially their nests and young ones.

While you can’t prevent all bird deaths, especially for easy prey such as nestlings, you can make an effort to keep rodents out of your yard.

The biggest thing you can do to keep these animals away from birds and away from your yard is to keep things clean, and not just at your feeders.

Birds face all kinds of threats in the natural world, including some you might not expect.

For example, did you know that a praying mantis can catch and kill a hummingbird? Click here to read more.

Unfortunately, cats are also a predator of wild birds and contribute to billions of bird deaths per year. One study estimated that free-ranging domestic cats kill between 1.3 and 4 billion birds and between 6.3 and 22.3 billion mammals every year, with unowned cats doing the majority of the damage.

If you own a cat, keep it inside or on a leash. While most damage is caused by community or feral cats, you can still do your part to control your cat and protect the birds in your yard.

To learn more about this complex issue, click here.

How Do I Protect My Backyard Birds From Hawks?

You can protect backyard birds from hawks by giving bird feeders cover from predators or taking down bird feeders temporarily to encourage hawks to look elsewhere if they’re staking out your yard in search of food.

Try placing feeders near cover such as trees or bushes, or even under tree branches, where hawks can’t see the feeder from above.

If a hawk is staking out your feeder and you want to protect the songbirds, take the feeder down for three or four days.

Hopefully, the hawk will move on to other feeding grounds. The songbirds will likely return when you put the feeder back up.

Do Fake Owls and Wind Chimes Keep Hawks Away?

Owl decoys and noises such as wind chimes may work temporarily, but ultimately, hawks and other birds will get used to these items and begin to view them as non-threats.

Try moving your decoys or noisemakers around your yard so predators don’t get used to them.

Should I Scare Hawks Away?

This is completely up to you, as long as you aren’t harming them in any way.

Many homeowners don’t prefer hawks in their yards, as they can pose a potential threat to pets like chickens or even small dogs in rare cases, in addition to their threat to other backyard wildlife such as songbirds.

However, hawks and other predators are a key part of nature’s cycle, so many people don’t do anything to deter them.