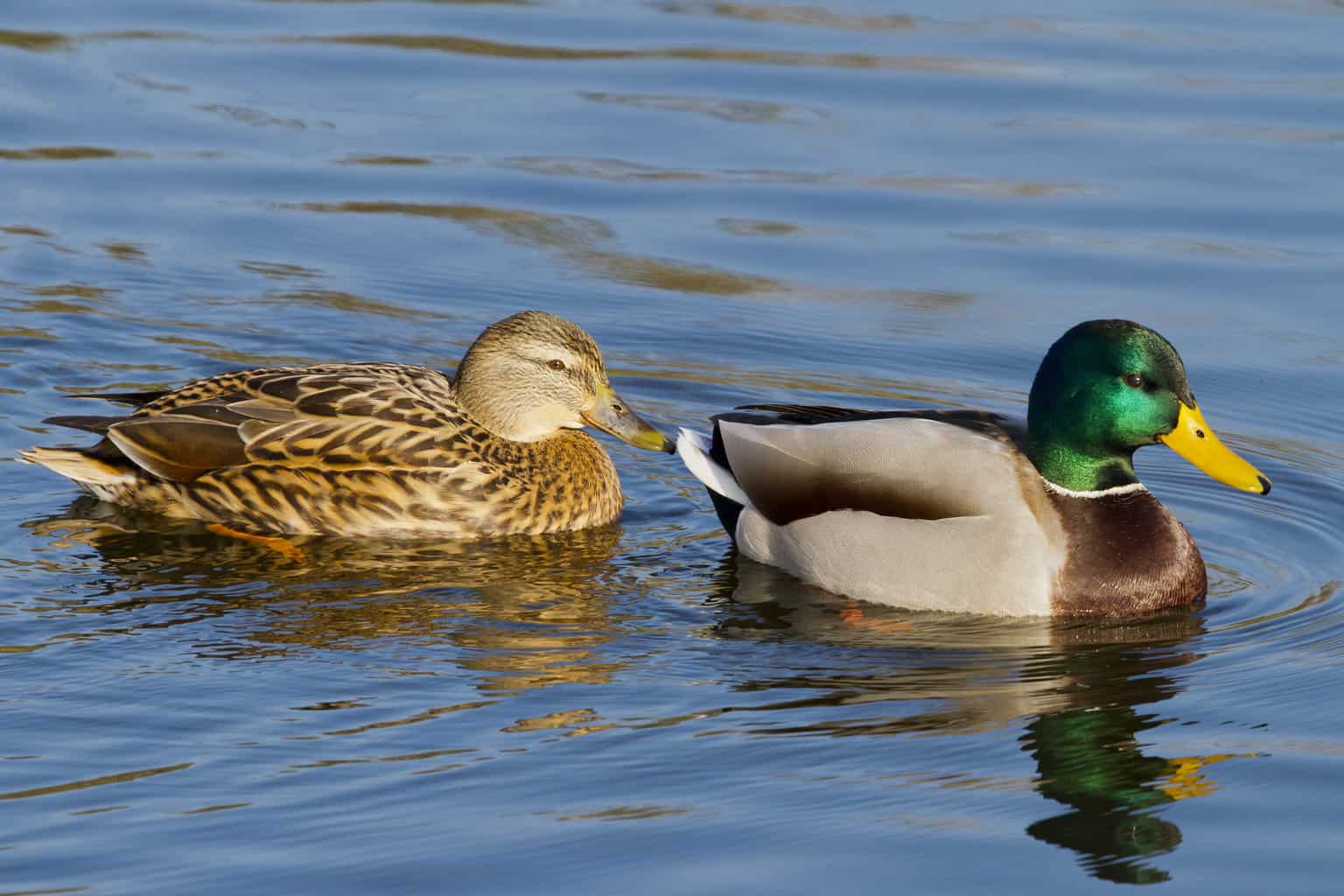 When we see waterfowl or certain aquatic birds, our minds may leap immediately to ducks. There are indeed plenty of ducks to be seen throughout the different regions of North America.

But there are plenty of birds that look like ducks (at least superficially) that are not closely related.

So, to help you identify waterfowl and aquatic birds, let’s take a closer look at ducks and some of the birds that resemble them:

“Duck” is the common name for a range of waterfowl within the Anatidae family. Within the family, ducks are split into a variety of subfamilies and “tribes.”

There are at least 29 types of native ducks seen in North America.

Which Ducks Can Be Seen in the US?

In the US, numerous duck species can be seen, including many species of dabbling duck and diving duck. There are also sea ducks within the sub-family Merginae.

Of course, the species mentioned above share certain similarities but can be very different from one another in looks and habits. So many different waterfowl might easily be mistaken for one or more of the above.

But here are some birds commonly thought to resemble ducks in some way:

Coots are medium-sized water birds that are members of the rail family, Rallidae, and belong to the Fulica genus. In North America is found the American coot, Fulica americana, also known as a mud hen or pouldeau.

The American coot is a migratory bird seen across much of North America. It is found year-round in the southwest and along the Pacific coast and can be seen in more northeastern regions during the summer breeding season.

They live near water, inhabiting wetlands and open bodies of water in North America.

These are frequently mistaken for ducks, though they are in a separate order and only very distantly related.

Coots are dark-gray to black with a bright-white bill and forehead. Their legs are yellowish-green. At close range, you may see a small patch of red on their foreheads.

One marked difference between the American coot and ducks is that while ducks have webbed feet, coots have broad, lobed scales on their toes and lower legs which fold back with each step. This makes it easier for them to walk on dry land.

Gallinules (Gallinula genus) are, like coots, in the Rallidae family. This genus includes the common gallinule, the most commonly seen rail species in much of North America, except for the American coot in some regions.

It is also sometimes known as a marsh hen and was previously classified as the moorhen.

Common gallinules are medium-sized marsh birds. Again, they have long legs and toes rather than webbed feet like ducks. These ducks can walk comfortably walk on wetland environments.

Typically charcoal gray, they have a white stripe down their sides and white outer tail feathers. Adults have a bright red shield on the front of their heads and red bills tipped with yellow.

Other birds in this genus include the purple gallinule, found in the far southwest of the US, and the grey-headed swamphen (an Asian species), which has established itself in small areas south of Florida.

Geese, like ducks, are a waterfowl species in the family Anatidae. This group comprises the genera Anser (the grey geese and white geese) and Branta (the black geese).

Geese are typically larger than ducks, often with longer necks. Smaller geese (black geese) can sometimes look like ducks, especially when viewed from a distance, where scale is difficult to determine.

The Canada goose, Branta canadensis, and cackling goose, Branta hutchinsii, might sometimes be mistaken for ducks in North America, for example, along with Branta bernicla, which has a shorter neck than other species.

Though these do all have slightly longer necks and wings than ducks.

Grebes are aquatic diving birds in the order of Podicipediformes. Grebes are widely distributed freshwater birds, with some species also found in marine habitats during migration and winter.

Superficially, they resemble other diving birds, such as some diving ducks, loons, and coots. Interestingly, however, they are most closely related to flamingoes.

Grebes have unusual plumage. It is dense and waterproof, and on the underside, the feathers are at right angles to the skin, sticking straight out to begin with and curling at the tip.

By pressing their feathers against the body, grebes can adjust how buoyant they are.

Grebes seen in at least some of North America include the red-crested grebe, eared grebe, horned grebe, western grebe, Clark’s grebe, least grebe, and pied-billed grebe. All of these can at least superficially resemble some ducks, especially when on the water.

Loons are aquatic birds found in many parts of North America. They are members of the genus Gavia within the Gavidae family.

These birds are the size of a big duck and resemble these birds in shape when swimming. Like ducks, the loon’s toes are connected by webbing, unlike the other lookalikes mentioned above.

Male and female loons have identical plumage, largely patterned black-and-white in summer, with grey on the head and neck in some species. All have a white belly. This resembles many sea ducks (Merginae). All species of loons have a spear-shaped bill.

The common loon, Pacific loon, and red-throated loon can be seen in the US, and all can be confused with certain duck species on occasion.

These are just some of the waterfowl and aquatic birds you might encounter besides ducks when birdwatching in North America.