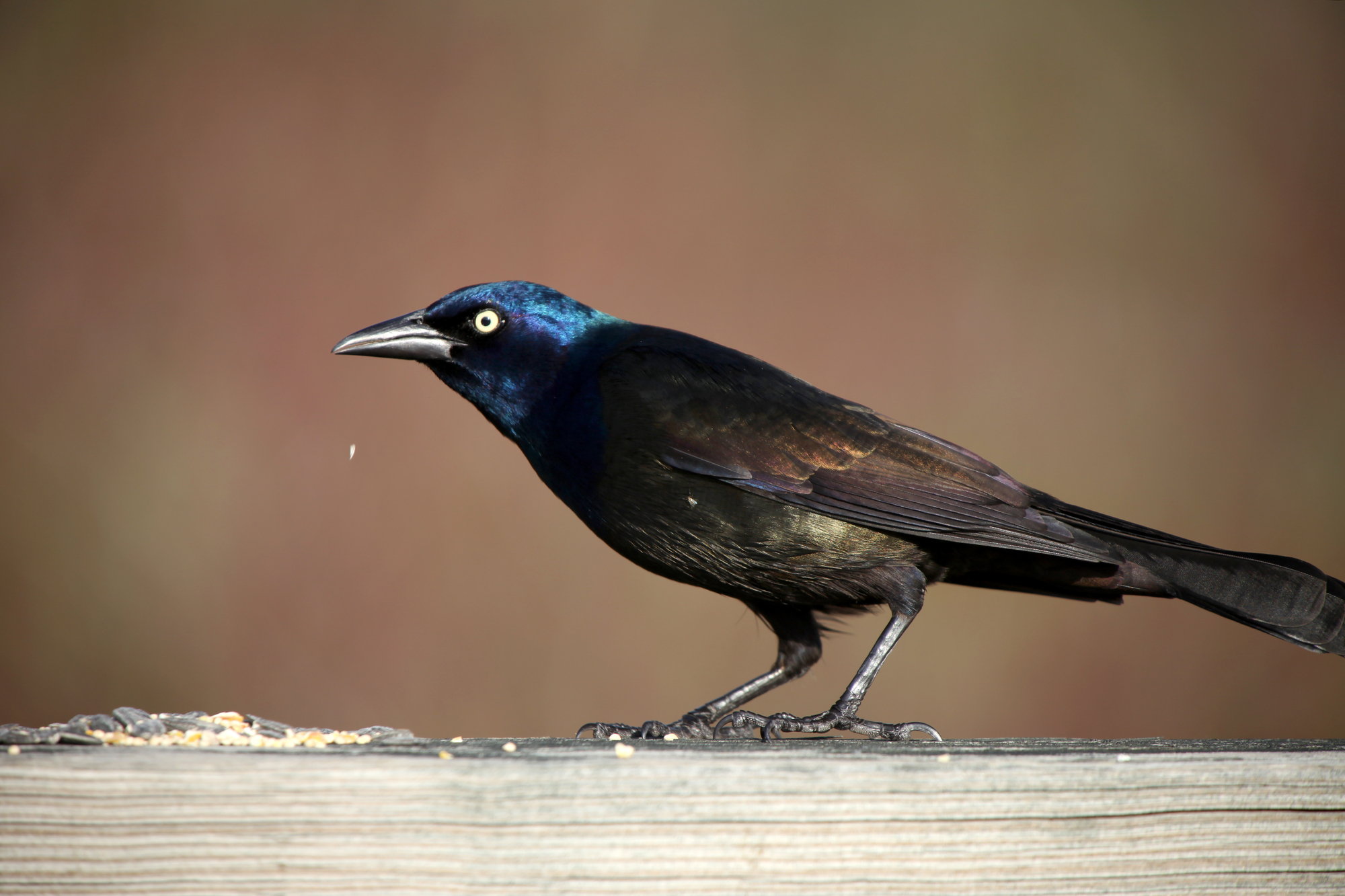 Many different types of blackbirds are found in Florida, and each has a unique personality and behavior.

While these blackbird species share certain characteristics – including their coloration and aerial habits – they can be quite different. Some are migratory, while others stay year-round. Some favor flooded areas while others live in more open habitats. And some are remarkably tame, while others are skittish around people.

Some migrate to Florida for the winter, enjoying the famously mild winters, while others stay here all year round like hordes of retirees. No matter which type you see, they all add color and life to our state!

So, let’s take a look at the blackbirds in Florida… 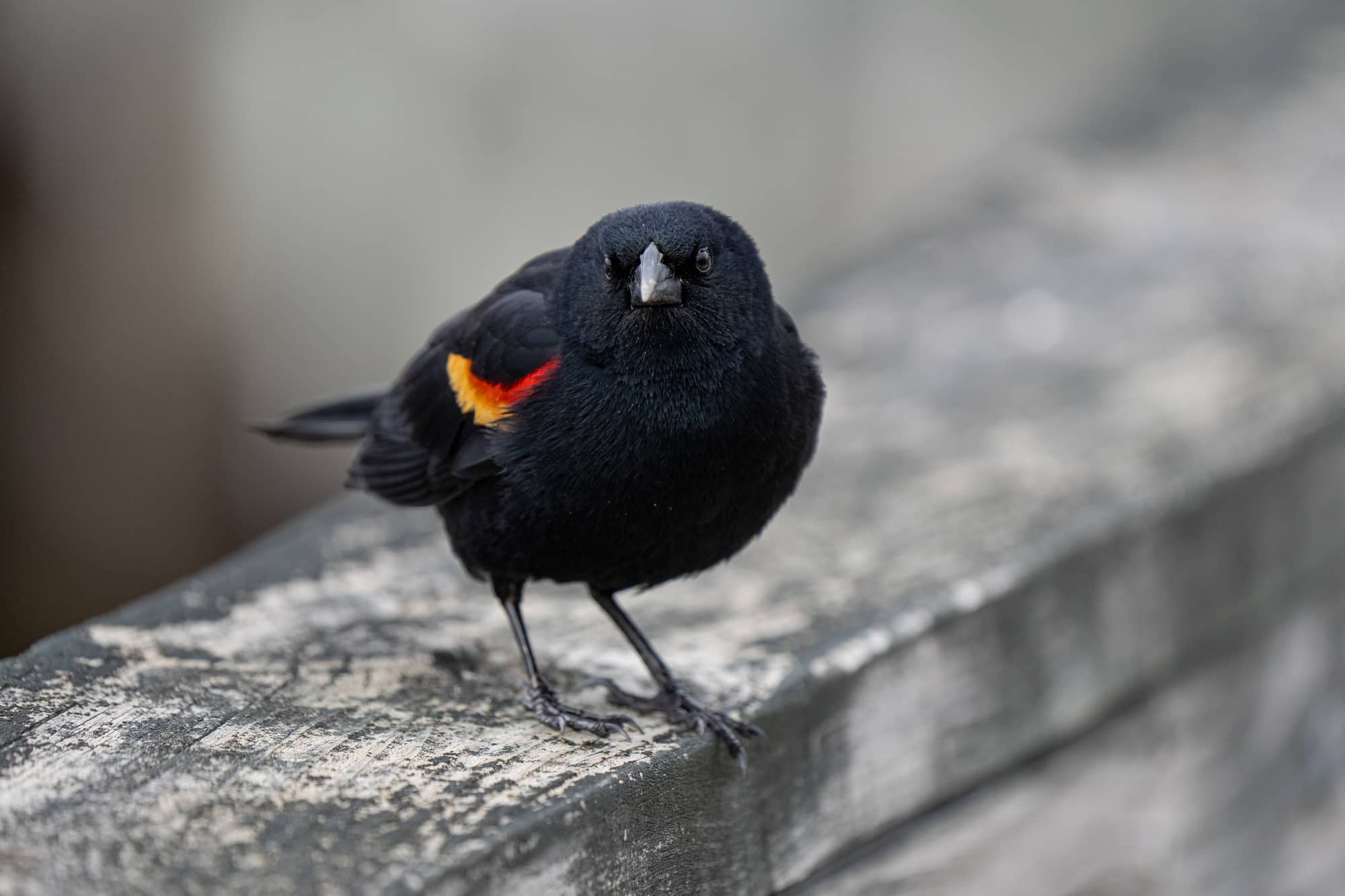 The Red-winged blackbird is a true blackbird species native to North America. The adult male has black plumage with conspicuous red and yellow shoulder patches, while the adult female is primarily dark brown.

These birds are typically found near freshwater marshes and wetlands, where they build their nests in dense vegetation close to the ground. The Red-winged blackbird is a common sight in wetlands and swampy areas in Florida.

These birds help control insect populations and disperse seeds from the plants they eat.

In addition, bird watchers can hear their distinctive song throughout the state during the breeding season. While they are not currently considered threatened or endangered, the Red-winged blackbird population has declined in recent years due to habitat loss and fragmentation. As a result, it is important to conserve these habitats so these birds can continue to thrive in Florida.

These birds are found in open woodlands, wetlands, and grasslands throughout Florida but are rather uncommon in the state. They are most active during the day and can often be seen perching on tree branches or foraging for food on the ground. During the breeding season, pairs of Brewer’s blackbirds build nests in tree cavities or on ledges.

Both parents help to incubate the eggs and care for the young birds. If you want to see a Brewer’s blackbird in Florida, the best time to hunt is during the spring and summer months, when they are most active. 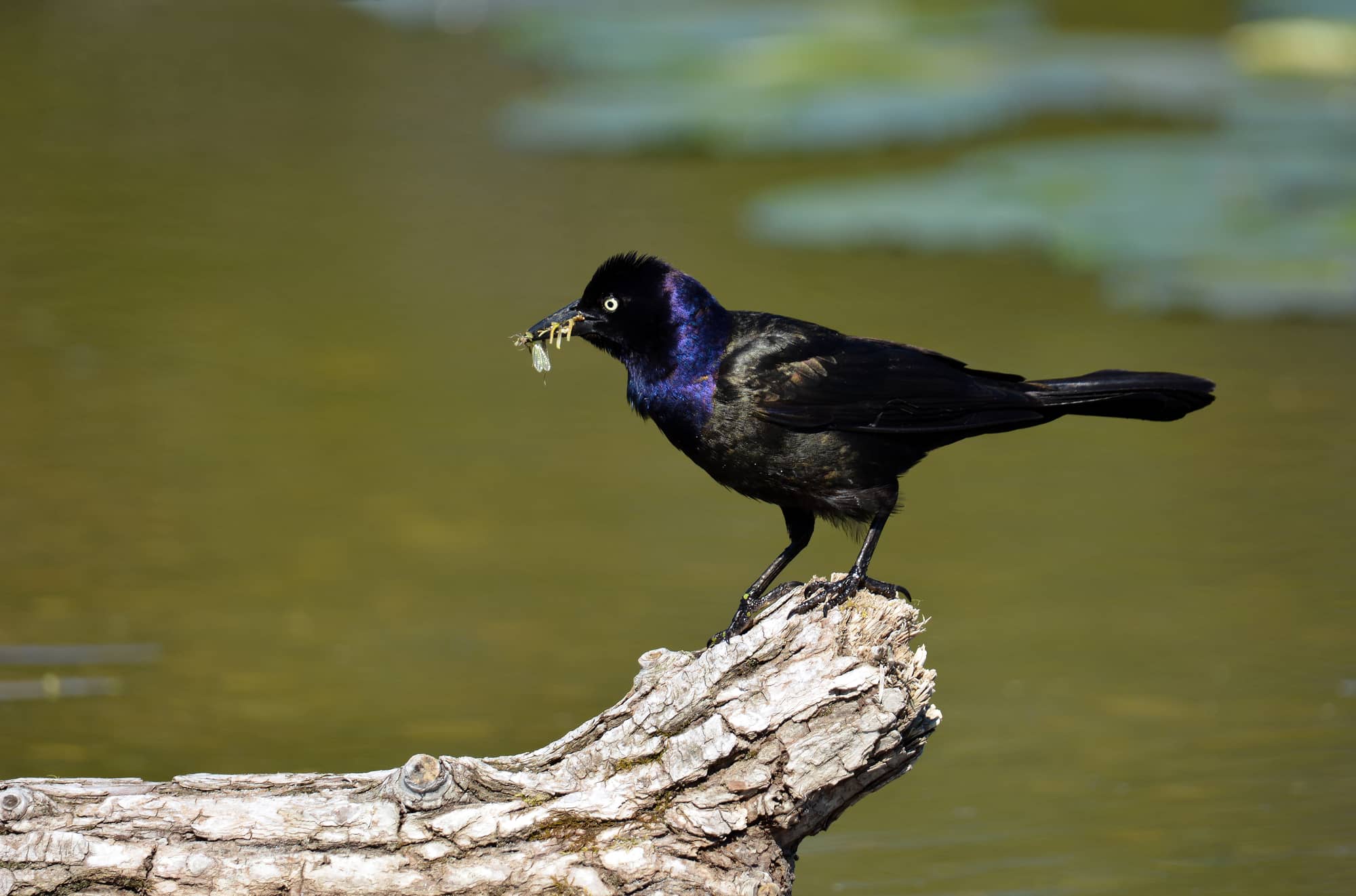 The Common grackle is a distinctive bird found in many parts of North America. They are most commonly seen in the spring and fall months in Florida. The best time to see them is usually around dawn or dusk when they are actively feeding.

These birds are most commonly found in wooded areas near wetlands in Florida. They feed on a variety of small invertebrates, seeds, and fruits.

The adult Common grackle has an iridescent blue head with a long, dark beak, pale yellow eyes, and a lengthy tail. Males are often iridescent on their heads.

Although they are not considered endangered, their numbers have declined in recent years due to habitat loss and degradation. Thankfully, initiatives like the Great Backyard Bird Count have helped raise awareness about these fascinating creatures and their importance to the ecosystem. 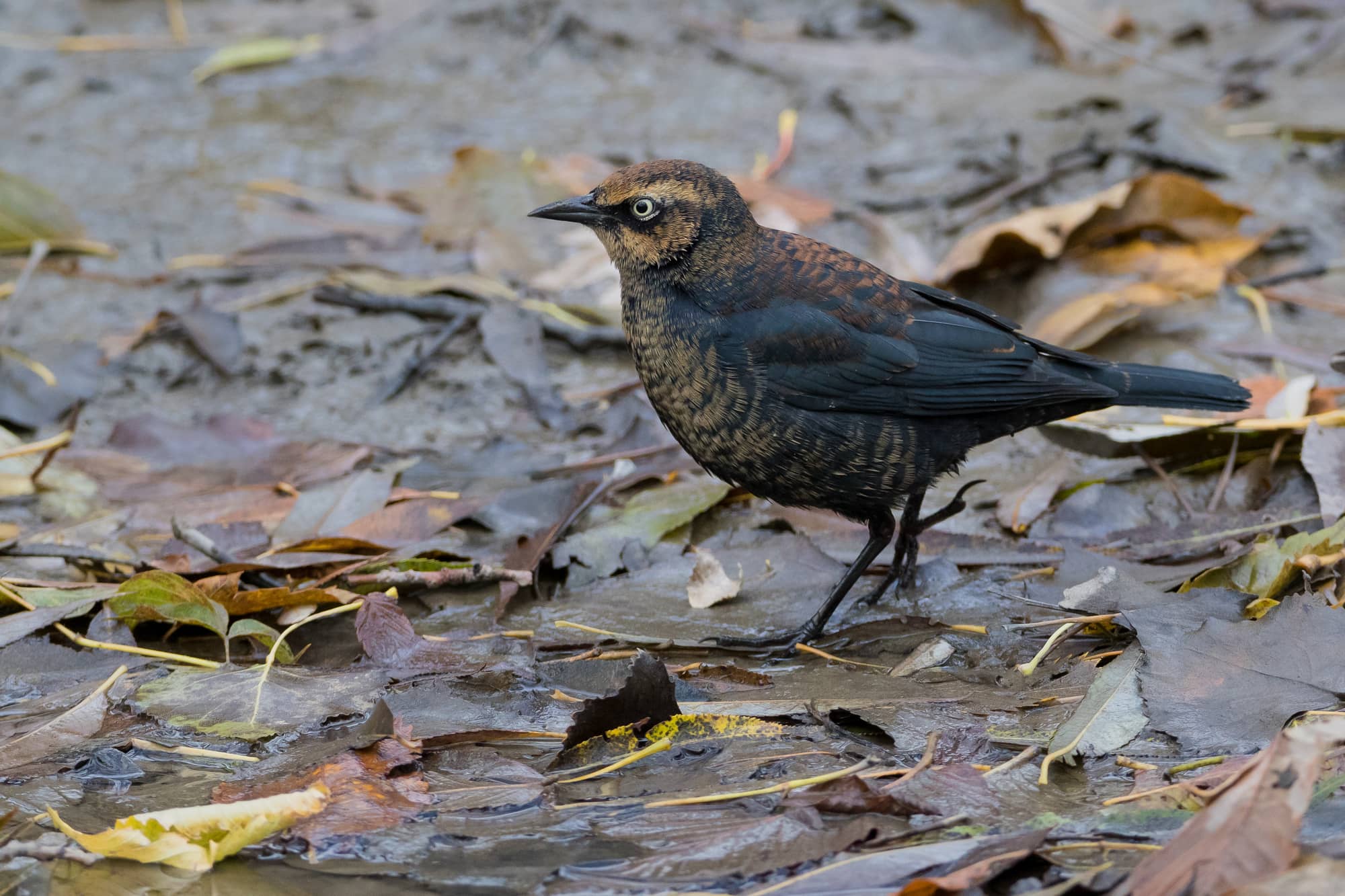 Aptly named, Rusty blackbirds are a blackbird species with a rusty brown hue to their feathers. This coloration is present during winter. In the summer breeding season, the male’s plumage is glossy black, shading to purple and green, while the female bird is similar but duller.

The Rusty blackbird is a species of concern in Florida. These birds are declining in population due, in part, to the loss of wetland habitat. They can be found in freshwater marshes and swamps in Florida from late fall through early spring.

The best time to see them is from December through February. During this time, they are often seen foraging in small flocks along the edges of marshes and ponds.

While they are not currently listed as endangered or threatened, their populations have declined significantly over the last few decades. As a result, conservation efforts are underway to help protect this species. 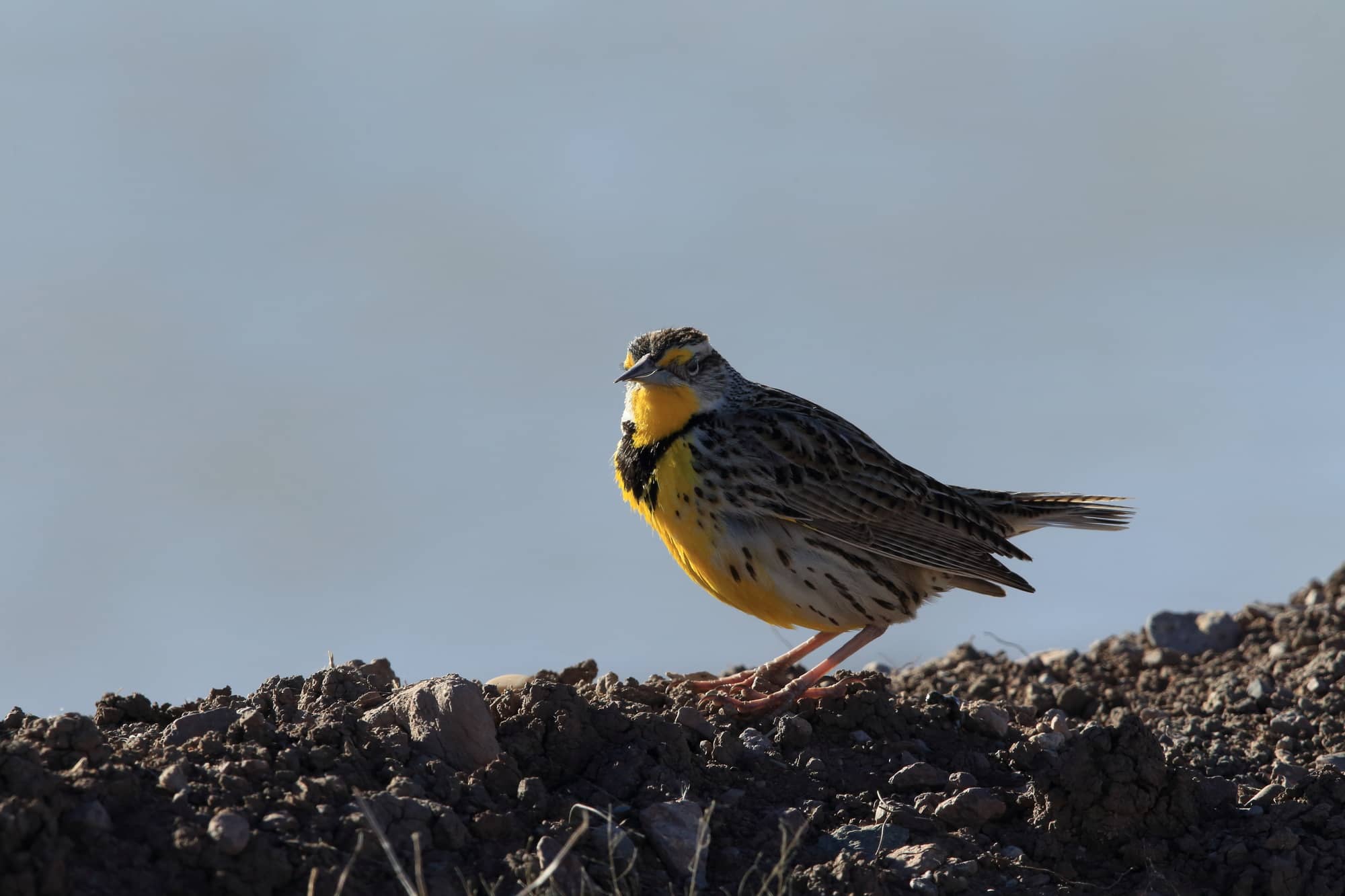 The Eastern meadowlark is a beautiful bird found throughout the eastern United States. They are most common in the northern and central parts of the Sunshine State.

Very similar to the Western meadowlark, this species has bold yellow underparts bordered with a black ‘V’ on the breast. The upper body, wings, and head are brown and streaked with black.

They can be seen all year round but are especially easy to spot nesting in the springtime. The best time to see them is early in the morning or late in the evening when they are actively searching for food.

With its bright yellow breast and distinctive song, the Eastern meadowlark is a welcome sight in any Florida backyard. If you’re lucky enough to spot one, take a moment to enjoy this beautiful bird. 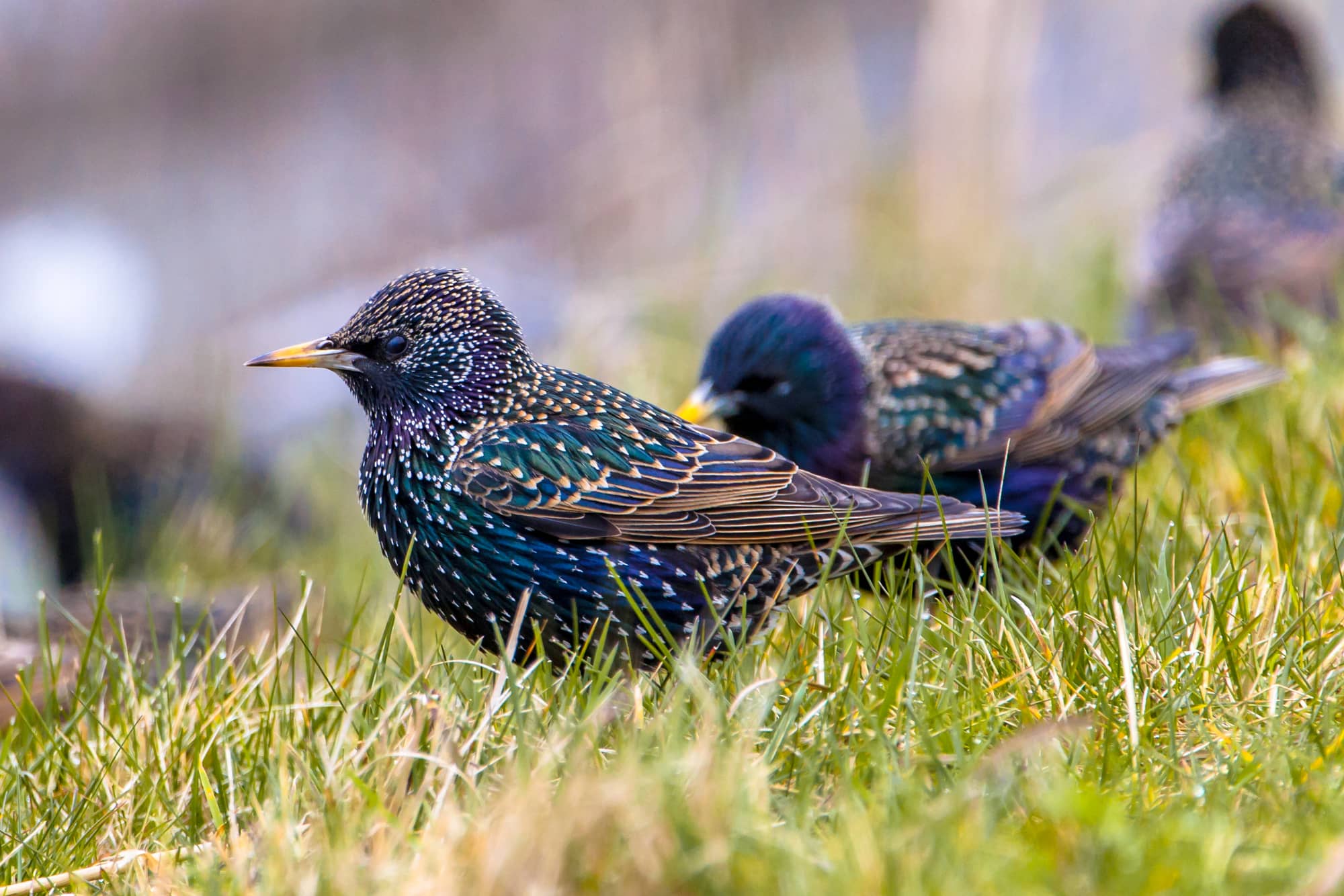 The European starling is a small, stocky bird with black feathers and yellow eyes. These birds are common in Florida all year round. However, they are most active during the spring and summer months.

European starlings are social creatures and often travel in noisy flocks. They can be found in open fields and woodlands and often build their nests in trees or bushes. These birds are omnivorous and eat a variety of insects, fruits, and seeds.

European starlings are considered a nuisance species in Florida due to their aggressive behavior and loud calls. However, these birds play an important role in the ecosystem by controlling insect populations. 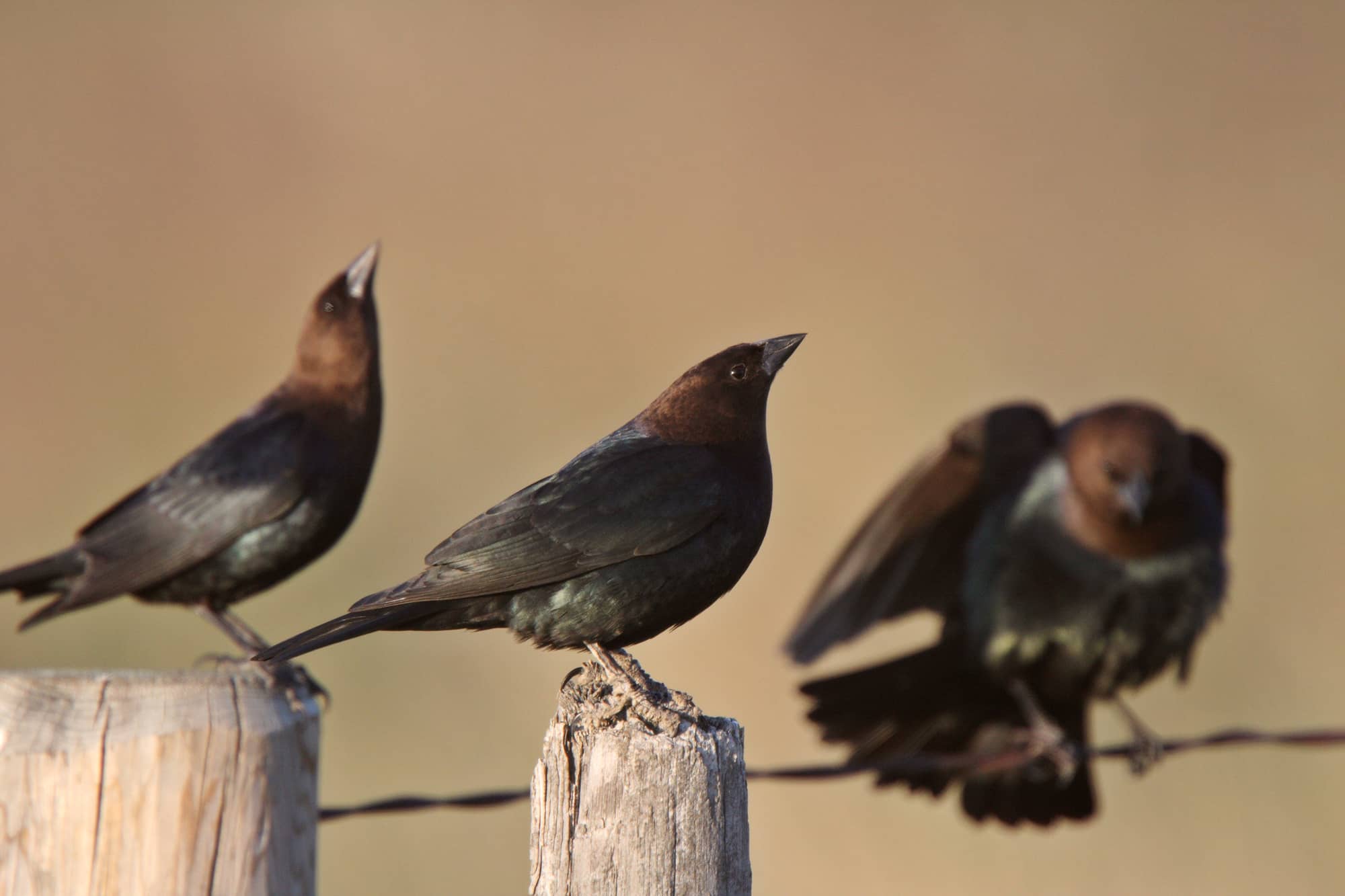 In Florida, they are most common in the northern and central regions of the state. Brown-headed cowbirds typically form flocks of 10-20 birds, but communities of up to 100 have been reported.

They are often seen near cattle pastures and prairies, hence their common name. The best time to see Brown-headed cowbirds in Florida is during the spring and summer months when they are breeding. They do not build their own nests or care for their young. Instead, they lay their eggs in the nests of other birds, such as the Eastern bluebird. 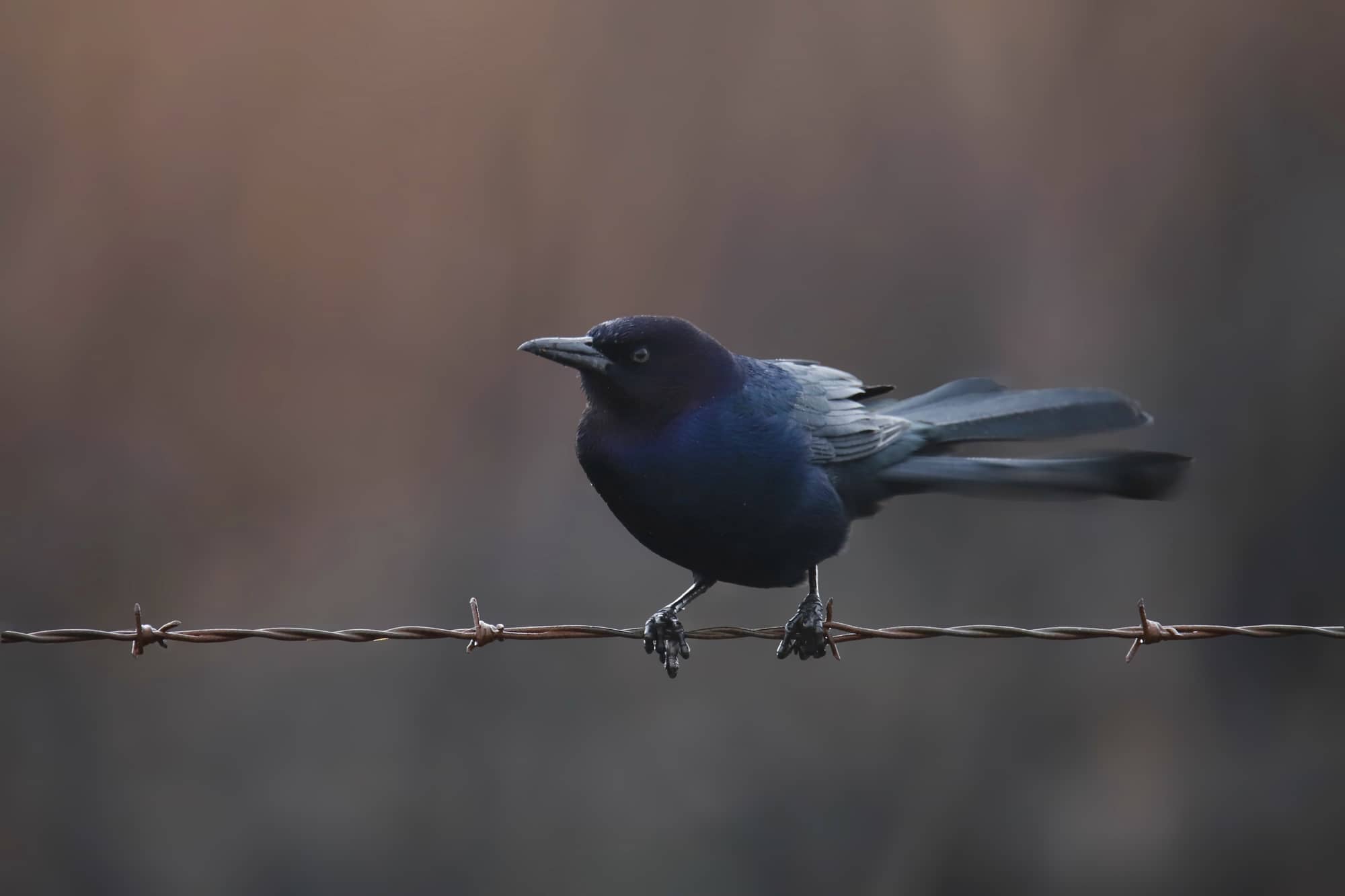 The Boat-tailed grackle is a large, glossy blackbird with a long, keel-shaped tail. Grackles are found in wooded habitats near water and are particularly common in Florida. The birds are most active in the morning and evening when they can often be seen foraging for insects in the trees or chasing each other around in play.

During the breeding season, males perform an elaborate courtship ritual that includes fluffing out their feathers, nodding their heads, and making a clicking noise with their beaks. Boat-tailed grackles are relatively common throughout Florida and can be seen year-round.

Their behavior in the state differs from that of other areas. In other states, they are exclusively coastal but have adapted to inland urban areas in Florida. 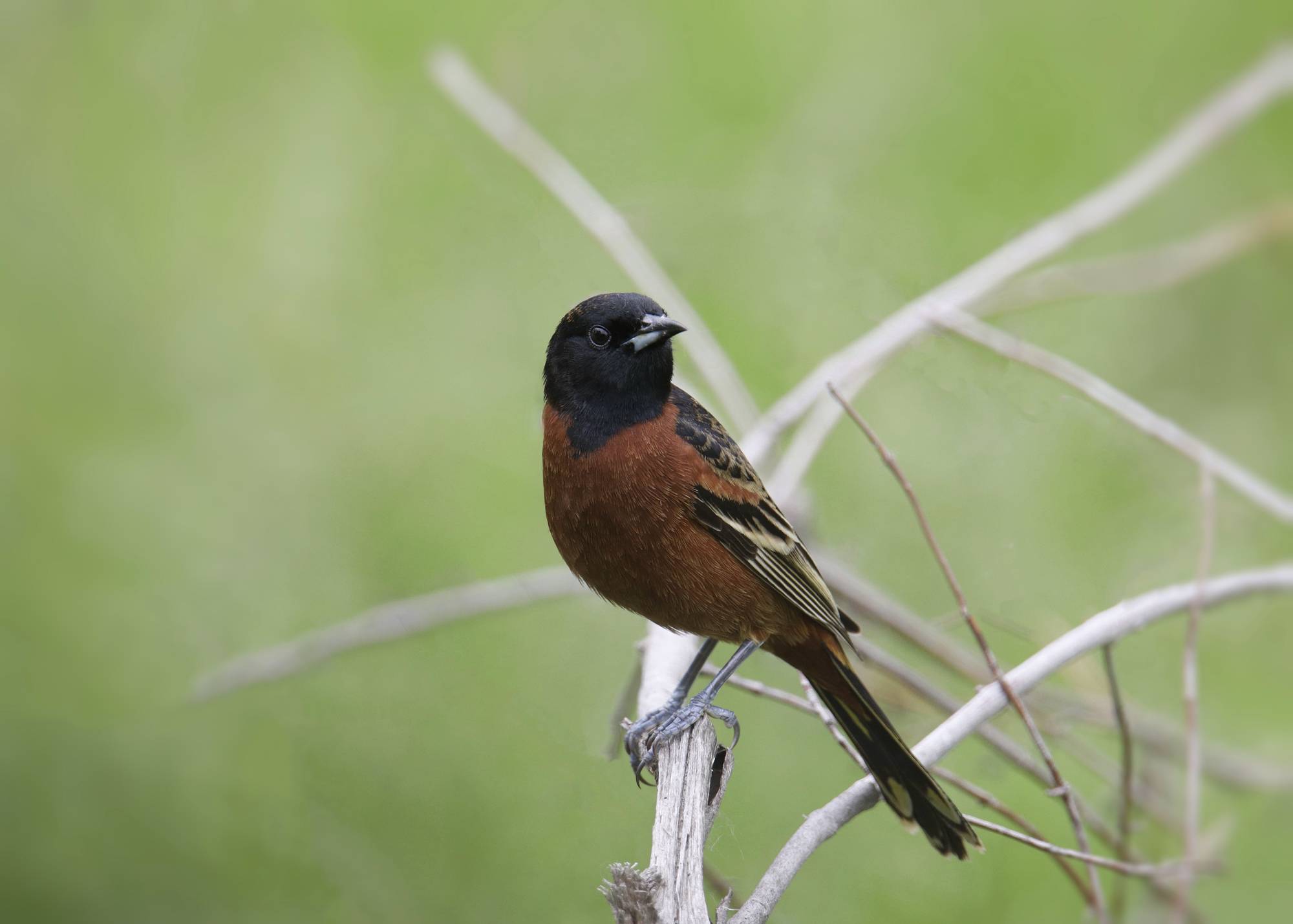 The bill is thin and black, with a modest blue-gray tinge at the base of the lower jaw. The chestnut underside, shoulders, and rump are present in the adult male, while everything else is black, including their darker wings. The adult female and juvenile have olive green on their upper parts and breast, while the underparts are dark.

During this time, male Orchard orioles are particularly conspicuous as they sing from treetops to attract mates. At other times of the year, Orchard orioles are more likely to be found in woodlands and forests. However, they will also visit gardens and parks in search of food. So, if you’re lucky, you might spot an Orchard oriole right in your own backyard! 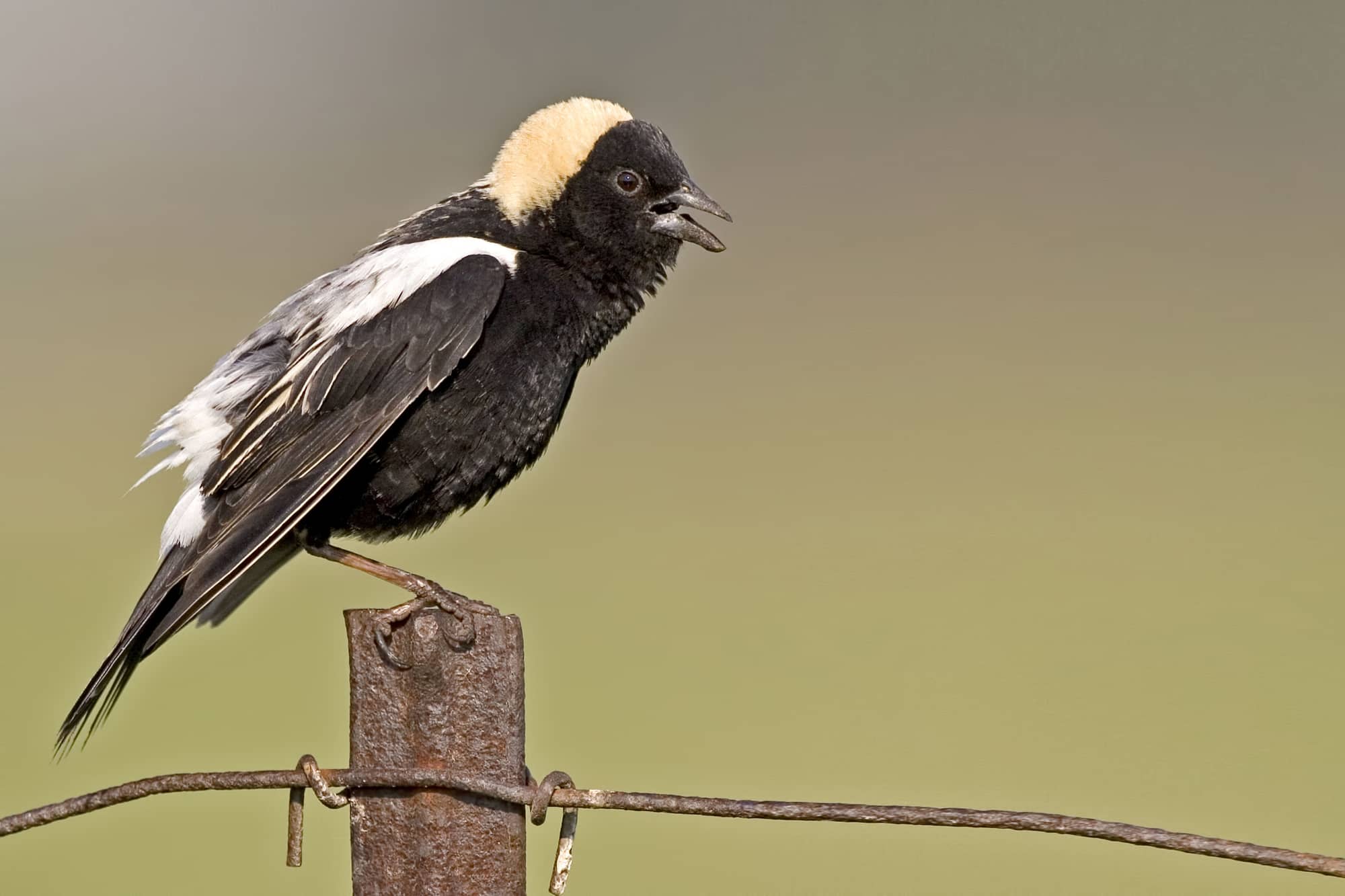 The Bobolink is a beautiful black and white bird that is becoming increasingly rare in Florida. These birds are known for their distinct songs, which include a variety of whistles, clicks, and notes.

Males are primarily black, with a yellow patch at their napes, white shoulders, and lower backs. Females are light brown with black streaks on the back and flank. Their wings and tails are also darker.

Male Bobolinks sing from perches high in trees to attract mates, often defending their territories vigorously. In Florida, Bobolinks are most commonly seen in the northern and central parts of the state.

They are migratory birds, so the best time to see them is during the spring and fall months. However, some Bobolinks do stay in Florida all year round. You’ll be treated to an extraordinary sight if you’re lucky enough to see one of these birds. 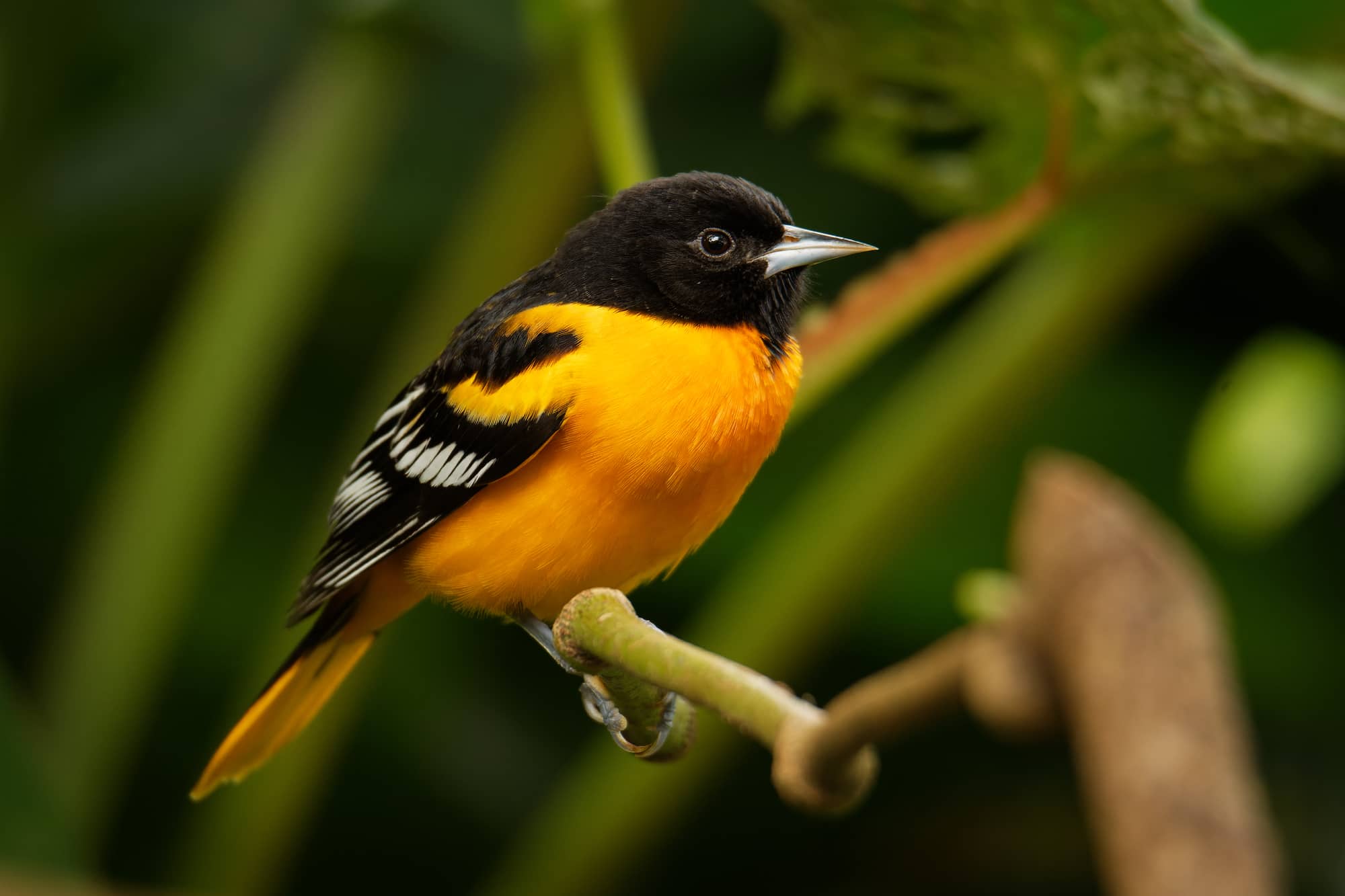 The Baltimore oriole is a beautiful and distinctive songbird common in Florida. These birds are easily recognizable with their bright orange and black plumage and black wings with white wing bars. They are most often seen in wooded areas, making them a popular bird for birdwatchers.

The best time to see Baltimore orioles in Florida is during the spring and summer months. However, they can be seen year-round in some southern parts of the state.

In recent years, there has been an increase in the number of Baltimore orioles wintering in Florida, making them a more common sight during the winter months. Whether you’re a casual birdwatcher or a serious birder, keep your eyes peeled for these beautiful birds the next time you’re out in nature!

The Spot-breasted oriole is a beautiful bird that is relatively rare in Florida. They are most often seen in the spring and summer but can be seen year-round in some parts of the state. They are most likely to be spotted in wooded areas, near bodies of water, or in parks and gardens.

This mid-sized songbird is unmistakable, with vivid orange coloration flanked by black wings, bib, and breast spots. The genders are similar, but females and juveniles have dark green down the back and tail and lack black on the face.

Interestingly, this species does not naturally occur here. Native to Central America, the Spot-breasted oriole was introduced to Miami in the 1940s. Florida remains the only North American state with a limited population, but the American Birding Association says it’s enough to be considered “countable” for avid bird watchers.

As you can see, a variety of blackbird species make Florida their home. Some are here year-round, while others migrate to the Sunshine State to escape the colder weather up north.

Each species has unique behaviors and adaptations that help them survive in Florida’s diverse ecosystem. So the next time you see a blackbird, take a closer look and see if you can identify which species it is!