How Do Hummingbirds Feed Their Babies? What You Need To Know! 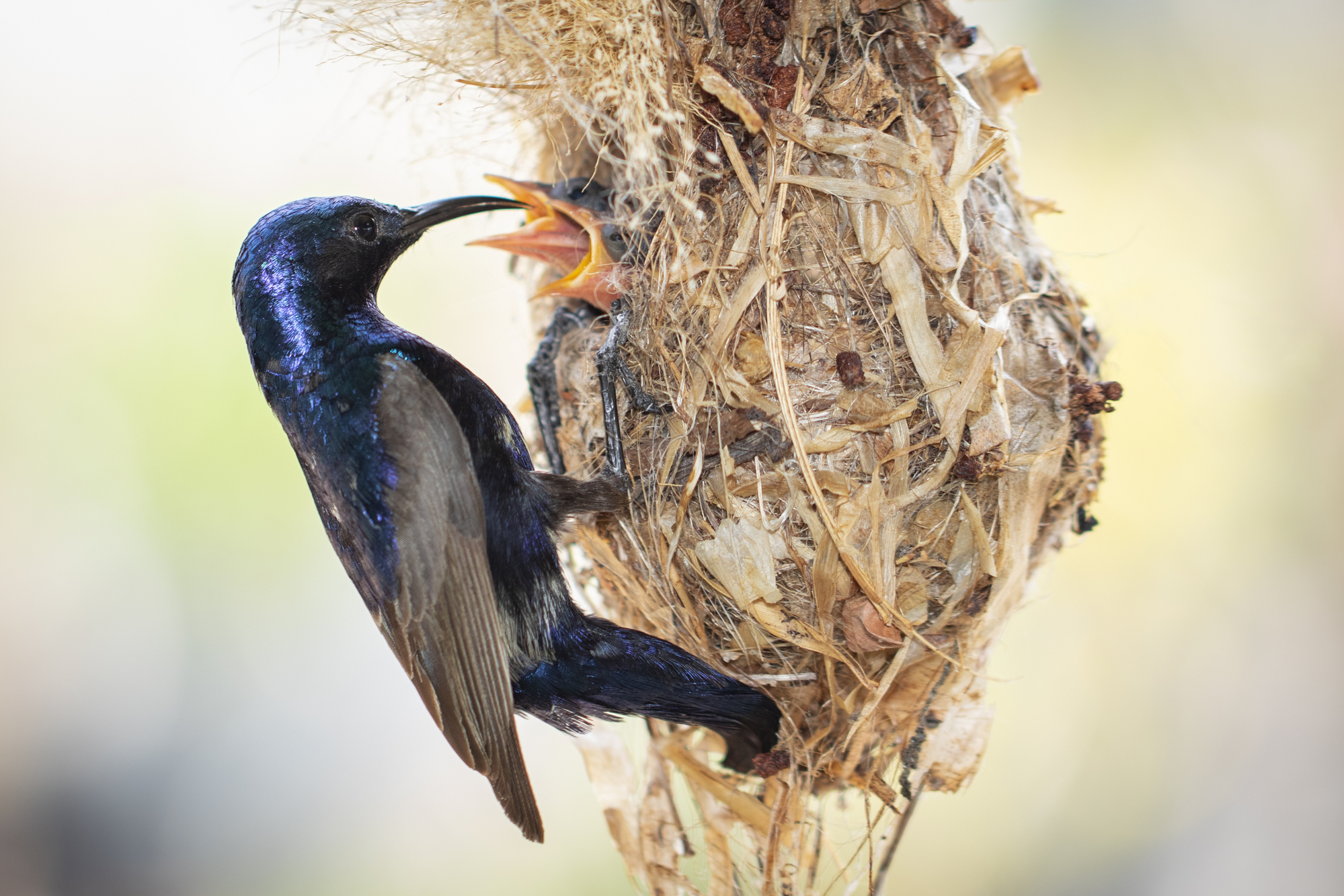 Hummingbirds appear to be the busiest of all the birds. From the crack of dawn, they’re seen flying from plant to plant, or stopping at a hummingbird feeder before disappearing in a flash.

Add to that the work of building a nest, incubating eggs, and caring for their young? Female hummingbirds undoubtedly have their hands—or beaks—full.

What Do Baby Hummingbirds Eat?

Female hummingbirds feed their young by regurgitating their own food, so a baby hummingbird’s diet will be very similar to that of an adult hummingbird.

Mother hummingbirds spend much of their time feeding on both nectar and small insects and spiders, which are then passed on to their young.

How Often Does a Hummingbird Feed its Babies?

Feeding baby hummingbirds is an around-the-clock activity. According to this article by the National Audubon Society, mother hummingbirds may leave the nest up to 200 times a day in search of food.

A mom hummingbird will do this every 20 minutes from dawn until dusk.

What’s more: That’s in addition to all the calories the mother needs for her own nutrition. In order to maintain their weight, hummingbirds need to feed themselves every 10 minutes and consume 50 percent of their body weight.

Why Do You Never See Baby Hummingbirds?

There are a couple of reasons why you may have never seen a baby hummingbird. The first? Nests—and the chicks inside—are extremely small and well-hidden.

Females tuck their hummingbird nesting platform away in a horizontal branch or shrubs where perceived predators, like humans, can’t find them. Species like the ruby-throated hummingbird will place nests between 10 and 40 feet off the ground.

Because of this, finding one often involves climbing trees or rummaging through dense shrubbery which is very disruptive to the nests inside.

Hummingbird babies are very small and impossible to see unless you get very close. According to the Phoenix Wildlife Center, baby hummingbirds weigh about .62 grams and measure about an inch long. That’s one-third the weight of a US dime.

The final reason? Hummingbirds grow up very quickly and can fly within one month of hatching.

Do Hummingbirds Leave Their Babies at Night?

In general, hummingbirds are more active during the day and will spend the nights roosting in their nests.

In order to preserve energy, hummingbirds don’t necessarily “sleep” at night. They enter a hibernation-like state called torpor (TOR-per) in which they lower their body temperature and heart rate, reducing their metabolism significantly.

Hummingbird nests, which are made of small twigs and plant fibers and strung together with spiders’ silk, are often not strong enough to withstand a year’s worth of conditions—wind, rain, snow, other birds, and animals.

Some people say that hummingbird mothers return to the same area each year, but it’s most likely that when they return each spring, it’s time to build a new nest.

What Are Baby Hummingbirds Called?

Do Hummingbirds Have Multiple Broods Per Year?

Whether a female hummingbird has more than one brood ultimately depends on the location and species of hummingbird.

While a ruby-throated hummingbird that migrates long distances for its breeding season may only have one brood a year, a hummingbird in a warm climate can have between two and three broods annually.

Research from 2021 has also shown that Costa’s hummingbirds tend eggs and young from two nests at the same time. That same study also showed evidence of these birds nesting during autumn.

Researchers concluded that autumn breeding and the occurrence of multiple broods are dependent on the availability of food sources, such as feeders and flowering plants in urban areas.

What Should You Do if You Find a Baby Hummingbird on the Ground?

Unfortunately, many baby animals that people bring to wildlife rehabilitators are still under the care of their parents—from fawns to fledglings. Even if you can’t see them, parents are often nearby, keeping a watchful eye and providing food and safety.

As with anything, there are nuances to each situation. While fledglings make up a majority of baby birds that people see on the ground and rarely need help, it is acceptable to return chicks to their nests.

If a bird is injured, the Mass Audubon recommends contacting a wildlife rehabilitator. Several factors, including the sight of blood or discharge from its eyes, nose, or beak, can help you determine if a bird is injured or sick.

If you’re certain that a bird requires human help and you take it to a wildlife rehabilitator, don’t give it food. The WildCare hospital says that baby hummingbirds can choke on the food, and are most likely to survive if brought directly to professional care.

Jacob Swanson is a writer and wildlife photographer born and raised in Wisconsin and currently based in Salt Lake City. Since graduating from the University of Wisconsin-Madison, his work has appeared in over a dozen different web and print outlets. In his free time, he’s on a personal quest to visit every U.S. national park and see as many wildlife species as possible. His favorite birds are whooping and sandhill cranes.