Hawks In Mississippi: 6 Species To See In The South 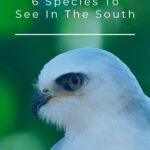 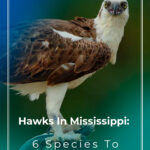 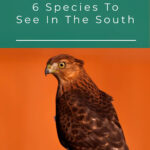 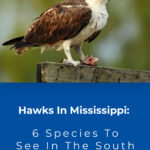 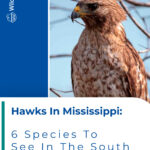 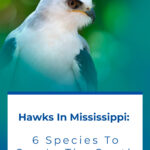 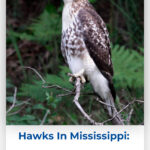 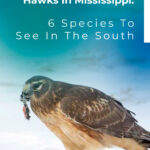 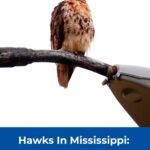 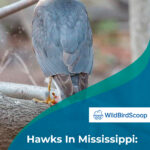 The great state of Mississippi, nicknamed the Magnolia State, is divided into five geographical regions. A whopping 65 percent of the state is forestland — that’s almost 20 million acres! The rest is coastal regions, rolling hills, and agricultural farmlands. There’Res also an area abundant with coniferous trees on the eastern rim of the state.

And of course, you can’t forget the river region that features the ever-famous Mississippi River.

With land like this, it shouldn’t come as a surprise to you that the Magnolia State is home to a wide and diverse assortment of plants, animals, and birds. We’re focusing on one animal species in particular — the hawk — that calls this state home and shedding some light on these grand birds of prey.

Below, you’ll find six hawk species to keep an eye out for on your next trip to the Magnolia State. We’ve also included two honorary hawk-like birds we deemed worthy of being on our list.

Although there are only a handful of hawk species in the southern state, they can be seen in abundance in many areas throughout the year. Read on to find out more!

The broad-winged hawk is found throughout Mississippi and boasts a far-reaching breeding population during the year’s warmer months. Then, when winter comes, broad-winged hawks migrate in large flocks called kettles — a typical characteristic of buteo hawks.

They fly south to Central America in one of the longest migratory routes of all raptors. On average, they travel over 4,000 miles to reach their destination. That comes down to about 69 miles each day!

The broad-winged species of hawks are known for their reddish-brown heads and pale undersides. Their wide tails are covered in broad black and white stripes.

Their main prey consists of amphibians like frogs and toads, and they also feed on small rodents and insects.

Red-shouldered hawks set up permanent homes in Mississippi, and you can easily spot these colorful raptors year-round. They especially like to nest near bodies of water and in tall trees.

One of this species’ remarkable features is that they stay in the same nesting area their entire lives. Even if some populations migrate north, they always come back to the same spot year after year.

As their name indicates, these birds can be identified by their red shoulders and chest areas. They also have wide reddish, rusty brown bars on their undersides. As part of the buteo clan, they have wide wings with round tips. Their tails have broad black and white stripes, which they like to show off by fanning them out.

Red-shouldered hawks like to feed on crawfish where they’re available, and they’ll also eat small mammals, reptiles, and insects.

Red-tailed hawks are some of the most commonly found hawks in North America, so it makes perfect sense that they maintain a constant presence in Mississippi.

You can spot them flying near highways and wide roads, but these raptors also like perching on fence posts and billboards, so be sure to keep your eyes up if you hope to spot one.

True to their name, the main distinguishing feature of these birds is their cinnamon-red tails. Many have rich brown plumage on their backs and undersides, and you can also notice a dark bar running between their shoulders and wrists. Just like other buteos, red-tailed hawks have wide wings, but theirs are more compact compared to other types of hawks.

When they’re looking for their next meal, red-tailed hawks rely on their keen eyesight and remarkable hunting skills. They search in open fields for their prey, which includes voles, rabbits, and other small mammals.

Cooper’s hawks can be seen throughout the year in the Hospitality State. They prefer setting up their homes in woodland areas, but you can also spot them in riparian zones next to rivers and streams.

Identify Cooper’s hawk by their blue-grayish coloring on their backs, undersides that are characterized by dark red bars, and thick, dark banded tails.

Just like other accipiters, Cooper’s hawks perch in high spots waiting for their prey to appear. They also use other hunting methods, such as the hide-and-pounce tactic, where they hide in the dense cover before suddenly pouncing on their prey. These birds rely on their speed and power, as well as the element of surprise, to find a meal. They prefer eating small reptiles, mammals, and amphibians, but they’ll also feed on small-sized birds, like starlings and quails.

Sharp-shinned hawks are found all over North America, especially throughout Mississippi. They prefer breeding in woodland and forest habitats, mostly opting for coniferous forests, where they’ll likely be perched on a branch waiting for their food to come to them. When this isn’t the case, however, these birds can be seen flying through the trees looking for their next victim, which may be a lizard, insect, or small mammal.

The most distinguishing features of these accipiters are their pale yellow eyes. Even though they’re the smallest hawks in all of North America, you can easily spot their white undersides and bluish-gray heads. Sharp-shinned hawks have short, round wings. In contrast, their tails are square-shaped with pointed tips.

Northern harriers have a distinct non-breeding population in Mississippi. In other words, they just come in the wintertime to enjoy the warmer weather. Then, during their breeding season, they migrate north.

Northern harriers prefer to make their homes in the wetlands, as opposed to tall trees like other hawk species. You can identify them by their white undersides and gray backs, and their wings have dark edges and their tails have dark bands.

While hunting, these birds of prey depend more on their hearing than their eyesight. Along with a round face, this is another characteristic they share with owls.

Though these harriers typically prey on small birds and mammals, they’ve also been spotted hunting larger prey, such as ducks and rabbits.

The following are two bird species that share many hawk-like characteristics and are frequently spotted throughout Mississippi. So, we think it’s only fair that we include them on our list.

Ospreys were once classified as hawks, but in 1809, they were put into a group of their own: pandion.

Since fish are usually their food of choice, these birds prefer setting up their breeding grounds near bodies of water. These superb anglers are known for their adept diving speed and swiftness. This skilled precision comes from the way they hover over the water in search of their prey. Then, as they approach the water, they plunge in feet-first. Once they lock eyes with their prey, they stretch out their talons and go in for the kill!

One of their unique characteristics is the presence of barbed pads on the soles of their feet. These prevent the fish from slipping out of their grasp and escaping.

Another impressive trait of the osprey is that it has a fourth toe, which can move forward or backward when needed. Having two toes in the front and two in the back makes climbing and grasping much easier and more efficient.

Mississippi kites belong to the family Accipitridae, which includes hawks, falcons, and eagles. They’re aptly named for their love for soaring high up in the air.

These medium-sized raptors are covered in gray plumage, and their heads are black with grayish-white coloring. You can identify Mississippi kites by their narrow, pointed wings and long tails. They’re also known for their small, hooked beaks, which they use to catch insects, small reptiles, and mammals.

Boasting rich topography, Mississippi is home to these majestic birds of prey. They give off an air of intimidation and menace, yet there’s no denying their poise, flair, and beauty.

Many of the hawks in Mississippi can be seen year-round spread out in various areas. They make the most of the state’s fair weather and acres of natural, abundant landscape, so no matter where in the state you find yourself, there’s a good chance you’ll see one of the hawks on our list.

For even more bird-watching fun, keep an eye out for another of Mississippi’s prominent birds: the woodpecker. While many are known for their brightly-colored crests, it’s those beaks of steel that sets them apart. They’re one species you won’t want to miss on your next visit to the southern United States.