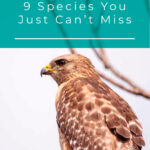 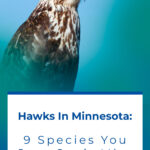 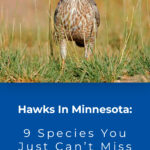 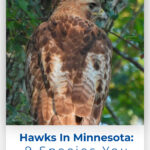 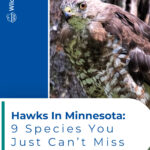 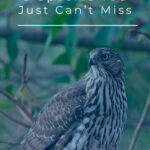 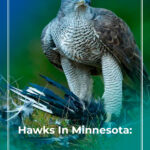 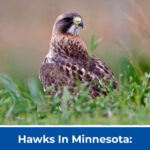 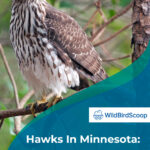 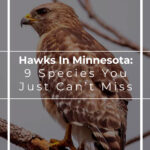 If you live in or visit Minnesota, you may be fortunate enough to witness a wide array of wild bird species. You might stumble upon different types of songbirds and birds of prey, including falcons, owls, eagles, and hawks.

There are nine species of hawks in Minnesota that you’ll be delighted to see. With striking appearances, distinctive habits, and impressive hunting abilities, watching those raptors in action can be a joy like no other.

So, are you ready to understand a bit more about each hawk type in the Land of 10,000 Lakes? Let’s dive in!

Red-shouldered hawks have a permanent residence in much of the eastern half of the United States, and Minnesota is the furthest they can go west. These unique birds of prey have a breeding range in the central part of the state.

The best thing about the medium-sized red-shouldered hawks is that they’re a breeze to identify thanks to their reddish-brown undersides and white markings on their long tails.

The diet of a red-shouldered hawk includes small mammals, lizards, snakes, amphibians, and toads. When hunting, this hawk will wait at the highest branch of a tree, then swoop down swiftly to catch its prey when it comes into view. Because these hawks rely on wooded areas for breeding and nesting, the removal of trees is the biggest threat to their existence.

The most common hawk species in the U.S., the red-tailed hawk is one of the largest raptors in Minnesota. It can be found year-round in this state, especially in the northern parts where breeding occurs. In winter, flocks of this bird may head further south for more warmth.

The appearance of this powerful hawk is quite captivating to take in. With broad, rounded wings and light-colored undersides, it’s hard to misidentify this bird of prey. It also has brown markings on its wings, which makes identification even easier.

If you’re wondering about what the red-tailed hawk eats, you’ll find that it has an appetite for almost everything. It preys on small mammals such as rabbits, rats, and squirrels, and it also likes snakes and smaller birds, such as pheasants and starlings.

You can see the red-tailed hawk pretty much anywhere in Minnesota. You may see one perched on a roadside pole, in a park, the countryside, or your own backyard.

Sharp-shinned hawks are among the smallest hawk types in Minnesota and the entirety of North America. In Minnesota, these hawks have three ranges. The first range is non-breeding in the south, the second is breeding-only in the north, and the third is migratory in central Minnesota.

These hawks have a beautiful appearance that is shockingly close to that of the Cooper’s hawk. They have orange bars on their bodies and light-colored wings and backs. Yet, the sharp-shinned bird’s size is smaller than the Cooper’s hawk’s, which makes them incredibly fast.

When it’s time to hunt, sharp-shinned hawks use their size to their advantage to help them catch prey at high speeds. After navigating forests for food, this hawk will ambush a songbird in a magnificent display of strength and agility.

Because these hawks are big fans of smaller birds, you may accidentally attract them to your backyard if you have bird feeders. If you wish to keep sharp-shinned hawks away, just remove the feeders for a couple of weeks until they stop coming.

Often mistaken for sharp-shinned hawks, Cooper’s hawks can be found near the southern border of Minnesota in all seasons. However, their breeding range extends for the rest of the state.

Their natural habitat is wooded areas and forests, but you may stumble upon Cooper’s hawk in the suburbs as well. Also, some of these birds of prey might stalk the songbirds in your yard if you have a bird feeder, so keep a careful watch for these predatory birds if you want to keep your frequent backyard visitors safe.

One of the most admirable hawks in Minnesota, Swainson’s hawk can be a delight to witness, especially as it migrates in flocks of a thousand birds. Its breeding range includes the southern and western parts of the state, but the best time of the year to see it is in April and September.

Swainson’s hawks migrate from the southern regions of South America to breed in North America, and the whole trip can take two months. Quite impressive, don’t you think?

The coloring of this magnificent bird of prey is quite unique. You’ll either spot a dark morph or light morph of this species. The dark version has a chocolate-brown body with a lighter-colored marking on the tail. The lighter version has a cream-colored chest and a reddish brand around the breast.

Swainson’s hawk usually loves to feed on mammals and insects such as beetles, locusts, and grasshoppers.

The northern goshawk’s wonderful appearance makes it hard to miss. But you won’t find it perched on a street pole or in an open area because the secretive bird would rather stay away from the human population. You’re more likely to find it deep inside forests, where it prefers to nest.

This hawk likes to prey on insects, birds, mammals, and carrion.

Rough-legged hawks can be found in Minnesota during their non-breeding season in the winter. In the summer, though, when it’s time to breed, these hawks migrate to Canada and the arctic parts of Alaska.

Because they spend a lot of time in the crisp arctic weather, rough-legged hawks have feathers that extend to their legs. These birds occur in both light and dark color morphs. Plus, they have long wings and a body shape that’s quite similar to that of a red-tailed hawk.

When they’re not feeding on small rodents in the winter, rough-legged hawks like to eat lemmings, hares, and squirrels in the arctic tundra.

One of the easiest raptors to identify, the northern harrier is known for its owl-like face, white tail feathers, and slim yet strong wings. It also has alternating dark-brown and white bars on its body.

Northern harriers reside in the southwest regions of Minnesota all year round. During the breeding season, you have a higher chance of witnessing them in central and northern Minnesota, and they prefer to stay near open areas like fields and marshes.

Unlike other hawks, northern harriers depend on their high sense of hearing to ensnare their prey, which is another characteristic they share with owls. They primarily feed on small mammals, reptiles, and other birds.

Last but certainly not least on our list of hawks in Minnesota is the broad-winged hawk. It has a breeding-only range that extends throughout the entire state. You’re most likely to come across one near the shores of Lake Superior and close to forested areas.

This rather short hawk has a reddish-brown body with a cream-colored underside. For a better chance of spotting one in Minnesota, you could take a walk in the forest during the summertime and listen for its high-pitched whistle.

Broad-winged hawks have a hunting style that includes perching on high tree branches and gliding to capture their prey. Their diet consists of small mammals, insects, and amphibians.

Novice and experienced bird watchers alike will be drawn to the hawks in Minnesota. With their wide variety of colors, eating habits, hunting techniques, and more, they’re sure to leave you in awe. Watching each one of these wonderful birds in its natural habitat can be a captivating experience for anyone who loves the world of birding.

Interested in learning more about other birds in the North Star State? Check out the different types of woodpeckers found in Minnesota, too!