Hawks In Massachusetts: 7 Bay State Birds Of Prey To See 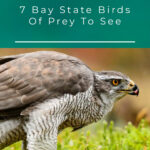 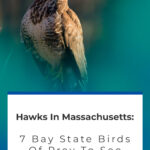 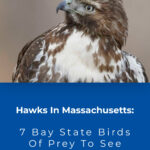 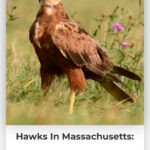 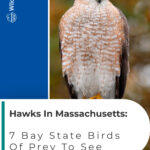 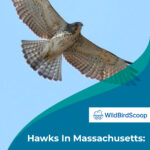 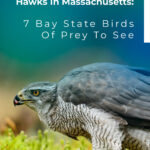 The state of Massachusetts is not only known as the landing place of the Pilgrims and the Mayflower but also for its highly diverse wildlife.

Over 60 percent of Massachusetts is forested, making it a perfect habitat for numerous bird species including but not limited to woodpeckers, owls, and hawks.

We’ve already discussed the various woodpecker species found in Massachusetts, so this time, we’re going to list seven of the most common hawks in the Bay State to help you closely identify and observe them. Read on to learn more about these beautiful, powerful, and intelligent birds!

Among three of the bird-eating accipiter hawks, Cooper’s hawks are one of the most widespread species in Massachusetts. Despite that, they’re listed as a species of special concern in the state due to their concerningly rapid decline.

Many confuse Cooper’s hawks for sharp-shinned hawks because of their strikingly similar appearance. Both birds tend to have brown-gray or solid blue-gray feathers on their backs and well-defined cinnamon or warm red bands on their tails. The only major difference between the species is that Cooper’s hawk has a larger head and body.

Like other hawks, Cooper’s hawk, which is named after ornithologist Wiliam Cooper, can be found in leafy subdivisions, temperate forests, and Massachusetts’ mountainous regions. It also isn’t unheard of to find them sitting on the branches of a tall tree in your backyard.

This species of hawk is generally more active early in the morning and exclusively consume vertebrate prey, feeding mainly on medium-sized birds such as robins, flickers, and jays, and the occasional squirrel, chipmunk, mouse, or bat.

Said to be the among smallest hawks species in the United States, sharp-shinned hawks have blue-gray backs and horizontal copper bars on their breasts. They’re slightly smaller than an average crow but bigger than a robin.

Both Cooper’s and sharp-shinned hawks are listed as species of special concern. They were believed to be abundant breeders during the nineteenth century, but have faced a steady decline due to deforestation that occurred in the early twentieth century.

Contrasting the typical behavior of hawks, sharpies don’t swoop on their prey from overhead; instead, they pounce on them from low perches and catch their prey through speed, agility, and the element of surprise.

Sharp-shinned hawks are primarily found in the temperate boreal forests of Massachusetts and may be observed during migration and in winter. Backyard bird feeders can be used to attract them in a more controlled environment, however, it’s important to keep in mind that the bird-eating hawks are predators, and therefore may scare away — or eat! — other birds you’re trying to entice in your backyard.

Northern goshawks are a seldom-seen breeding accipiter in Massachusetts. Although they’re not the most common, they’re still relatively widespread throughout the country.

Compared to the sharp-shinned and Cooper’s hawk species, two other accipiters found in the state, northern goshawks are fiercer, wilder, meaner, and larger birds. They won’t hesitate to attack if animals and people approach them or their nests too closely, even drawing blood if necessary, so it’s in your best interest to keep your distance when observing these defensive birds.

Outside their reproductive period, goshawks are usually silent, so it’s difficult to know when they’re going to attack. In times of food shortages, young goshawks may even kill and eat their younger, weaker siblings. Indeed, these hawks are among the most brutal.

The grayest and white-colored goshawks have a habit of preying on other birds. In fact, their name directly comes from the Old English word gōshafoc, which literally means “goose hawk.” Although named after an appetite for geese, northern goshawks mostly feed on medium-sized waterfowls, pheasants, rabbits, and partridges.

Northern goshawks have excellent aerial agility and prowl forests, suburbs, and backyards in search of prey.

Red-tailed hawks, also known as chicken hawks or red-tails, are one of the most common members of the buteo hawk genus in the United States and worldwide.

Although much more widespread today, red-tailed hawk populations diminished greatly in Massachusetts, primarily because of shooting and trapping. It’s only thanks to MassWildlife and similar conservation projects that their numbers steadily began to recover.

Typical of the buteo genus, red-tailed hawks are described to have broad, rounded wings and a wide but short tail. They’re the second-largest buteo hawk in North America just after the ferruginous hawk, falling between the size of the average crow and the goose.

Most red-tailed hawks have a chocolate-colored back, a streaked belly, and a trademark cinnamon-red tail. Among the three main color morphs, dark and intermediate morphs cover approximately 10 to 20 percent of the population in Massachusetts.

Red-tailed hawks can be found in almost any open space, including fields, trees, fence posts, and telephone posts. Unless you own a large backyard, you’re unlikely to be visited by these birds of prey. They mostly eat bigger mammals, such as rabbits and voles, so bird feeders filled with tasty seeds and nuts, unfortunately, won’t entice them.

Rough-legged hawks, also known as rough-legged buzzards, are a medium-large bird of prey that often moves south to Massachusetts during winter.

Compared to other buteo hawks, rough-legged hawks are the only known species that regularly hunts using the kiting method, where they hover in place instead of perching quietly on branches waiting for prey. They hunt on open land and primarily feed on small mammals.

This hawk’s preferred habitat for nesting is treeless tundras, cliffs, and outcroppings in low-lying boreal forests. They’re often seen in inland and coastal alpine regions and open countries, including dines, bogs, fields, and the like.

Mostly spotted in western Massachusetts, red-shouldered hawks are birds found in lowland forests and swampy, water-heavy areas such as bogs, streams, and beaver ponds. They’re among the first species of birds to return to Massachusetts just after the end of winter, with snow still partially covering the land and woods and ponds beginning to thaw out.

In Berkshire County, red-shouldered hawks are often found nesting on American beech trees and red oaks sometime during March and early April. Although not aggressively territorial, a pair of red-shouldered hawks require a territory of about a square mile. They might even evict all other bird species in the area if needed.

Appearance-wise, these hawks are easily distinguished by their dark-and-white checkered wings and reddish breasts. They also have pale crescents near their wings that are visible during flight.

Red-shouldered hawks have a diverse diet and aren’t only limited to mammals, rodents, or amphibians. On occasion, they feast on large insects, fish, and rarely, carrion (decaying flesh of dead animals). They kill prey mid-air by swooping directly onto them and sometimes fly low to catch them if necessary.

Broad-winged hawks are fairly common breeding raptors that have a distinct preference for mixed woodlands, hilly uplands, and lowland valleys. Every September, over 5,000 broad-winged hawks migrate to Massachusetts —specifically in Mt. Wachusett in Princeton — due to the rising thermal currents found in the area.

These hawks are slightly smaller than red-shouldered hawks but bigger than the sharp-shinned. They have reddish-brown heads, broad black and white tail bands, and barred underparts.

Broad-winged hawks are among the oldest species of birds found in the U.S., as fossils estimated to be over 400,000 years old have been unearthed in several parts of the country, including Florida, Virginia, and Illinois.

Similar to other raptors, these hawks live in mixed or dense mixed deciduous forests and spend much of their time hunting small animals underneath canopies.

Massachusetts is home to many types of bird species, making it a good vacation spot for both novice and experienced hawk watchers. It’s among the best places raptors and other birds can live in because of its myriad of swaps, streams, and inland forests. The state’s humid continental climate also helps since most types of hawks prefer warm weather.

Keen to learn more about birds? Take a look at Texas’ wide selection of majestic blackbirds!