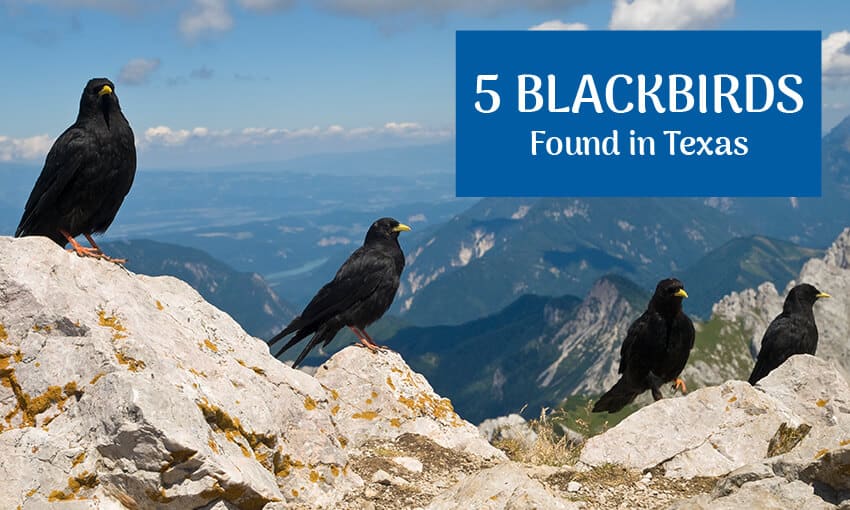 The 5 Species of Blackbirds Found in Texas

Blackbirds—the birds known for being hungry, noisy, bullies. Have you seen any?

You’ve probably watched them eyeballing your feeders and scaring your other colorful, little balls of music away (goodbye, cardinals.)

Maybe you’ve received an earful of angry “words” from one when you were too close to his proudly-defended territory—a territory that is remarkably similar in size to his ego.

Let’s dive into the world of blackbirds and see what there is to learn about them, their personalities, and how to keep them away from the feeders we set out for the little guys.

Not all black birds are blackbirds

It’s easy to assume that all black birds are related, but actual blackbirds belong to a family called Icteridae, along with grackles, orioles, cowbirds, meadowlarks, and the bobolink (among others.)

“Icterus” is a technical term for jaundice, meaning yellow, which is fitting for the species in this family, as many of them have bright yellow, orange, and red feathers. And what’s more, the birds that lack the colorful, warm-hued feathers usually have iridescent greens and blues. So in reality, these birds are quite colorful!

Knowing this makes it easy to distinguish them from a black bird, such as a crow. Crows are from a different family of birds called Corvidae and are larger and more intelligent than blackbirds. One of the easiest indicators is the color of the feathers. Unlike blackbirds, crows have silky, black feathers that don’t have any iridescence to them—they are just plain black.

Now that we know what a true blackbird is, let’s see which ones can be found in Texas.

The females, being smaller and lacking such a large tail, outlive adult males. Even as babies, they are more likely to reach fledgling due to their smaller appetite. This causes a “sex biased” population that has more females than males.

Great-tailed grackles have a keen memory and often have been known to remember and recognize the faces of individual researchers. When a researcher working in their breeding colony is present, they react with a chut alarm call when they see them!

They can be found in the entire state of Texas year-round. It has been recognized that this particular grackle has 8 subspecies—two of which are present in Texas. One resides in the western half (monsoni) and the other is in the eastern half (prosopidicola).

Males are all black with a bright red shoulder patch on the wing, usually with a little bit of yellow underneath the red.

Females are brown, striped, and sparrow-like, but larger with a pinkish-orange throat.

These are the most widespread blackbirds in the country and can be found throughout all of Texas year-round. A nest can be located in almost any weedy ditch or soggy, brushy habitat.

During breeding season, male Red-wings are extremely territorial and will defend their nests and females fiercely. They flaunt their red shoulders to show everyone they’re the baddest blackbird on the block and will follow up if a challenger ignores his displays. They spend hours chasing out other males and even attack potential nest predators that are 100 times their size—including humans. So next time you find yourself in this bird’s habitat, watch out! At best, you might get an angry dialogue buzzed at you, at worst you might get chased away with pecks to the head.

Despite how aggressive the males can be during breeding season, these birds share a neutral territory for foraging. In order to avoid confrontations and keep the peace, the males will hide their red patches as well as they can.

It’s not uncommon to find these birds mixed in large flocks with other Icterids, including grackles, cowbirds, and sometimes other blackbirds.

Males are all black with a glossy sheen. Their feathers have an iridescent shine to them that starts purple-blue on the head and transitions to blue-green down the body. Their eyes are bright yellow.

Females are a dull and drab grey-brown with no markings. Their wings and tail are dark and they usually have a dark, black eye (the dark eye is helpful when distinguishing them from the female Rusty Blackbird.)

Brewer’s Blackbirds are found throughout the entire state of Texas during the winter months before they migrate back north to breed. They can be seen in a variety of habitats, from coastal scrub, farmlands, and riversides, to parks and cities. The wintering flocks are somewhat nomadic.

These birds will usually forage in flocks, but don’t mingle with other blackbirds. You’ll find them pecking away at the ground, searching for seeds and insects. In agricultural fields they follow machinery with hopes of snatching insects that get turned up. Their love of insects can actually be a benefit to farmers. Brewer’s Blackbirds have been recognized for preventing outbreaks of insect pests including cutworms, grasshoppers, weevils, and certain caterpillars. Despite their pest-controlling appetite, they are sometimes removed from farmlands via trapping, shooting, or poisoning because they also include seeds and grains in their diet, thus appearing as a threat to farmers.

Males’ color pattern changes throughout the seasons. During the summer breeding season they are black with some slight glossy iridescents—similar to Brewer’s Blackbird but not quite as shiny. In fall and winter they are more brown and cinnamon colored around the edges and overall slightly “rusty”.

Females also follow suit with color change. Breeding females are silvery grey and shift to a more rusty, brown color during the fall and winter.

Rusty Blackbirds are found mostly in eastern Texas during the winter season. This is one of the few areas where the distributions of the Rusty and Brewer’s overlap. Because they are so similar looking, one might ask the question: how do you tell the two apart?

Well, there aren’t many places where these similar looking birds are in the same place, but luckily, the color change of the Rusty helps us out. Because of the Rusty’s color change in the fall and winter months to a more brown and buffy hue, it makes it easy to distinguish between the two when they are wintering in Texas. The Brewer’s will remain black and iridescent and the Rusty won’t—easy peasy!

While wintering, you will find these guys in areas that are wooded and with water, such as swampy or boggy places. They feed on insects and seeds, but have been documented munching on small birds like sparrows and robins!

Males of this species have vibrant yellow heads, sleek black bodies, and a contrasting white patch on the wings

There are no other birds in North America that can be compared to the male Yellow-headed Blackbird—they are visually unique. This makes it easy to identify without confusing it with another bird.

These guys migrate through Texas to get to their breeding and wintering grounds, so they don’t stick around for too long. On occasion, there might be a few birds that winter on the southern-most edges of Texas, but the majority travel to Mexico. When migrating, they travel in large, noisy, single-sex flocks.

Speaking of noisy, if these fellas pass through your property on the journey north or south, be prepared for them to be easy on the eyes, but..not so easy on the ears. Yellow-headed Blackbirds are notorious for their horrendous voices. They are generally described as unmusical and mechanical.

Fun fact: fossils of this species have been dug up in California, New Mexico, and Utah dating back to 100,000 years ago from the Pleistocene!

Blackbirds might be pretty with their shiny feathers and sleek bodies, but they aren’t necessarily the kind of bird you want hanging around your house or your feeders.

For one, they are noisy, and like we talked about with the last bird, it’s not always a pleasant sound. And for two, they can be insensitive, bullying meatheads. Not only do they usually outnumber any given species of songbird at your feeder, they are rude and will scare them away from your feeders, hog all the food, and even steal food right out of their bills!

There are a few ways to prevent blackbirds from coming to your feeder:

If you are in need of a new feeder or want something that’s a different style, purchase one that is blackbird unfriendly. This includes feeders that have small perches and small holes to retrieve food. Blackbirds that are large and bulky won’t be able to hang on long enough to get a bite, so they will look somewhere else. Feeders that have collapsing perches will also work.

Blackbirds are attracted to corn, sunflower seeds, millet, and milo seed. Many store bought bags of seed that are mixed have one or more of these blackbird yummies. The solution is to buy single-product seed, such as mealworms only or thistle only. If you don’t want to fill your feeders with a single seed, purchase safflower seed to mix with it. Blackbirds are not keen on safflower seeds and will not hang around if it’s there. Luckily, a number of songbirds do enjoy safflower, so it’s really a win-win!

Give them their own feeder

If they can’t seem to keep their grubby beaks out of your feeders, you can try to set up their own feeding station that’s far from your other feeders. Get some large feeders to fill up with all of their favorite eatings mentioned before—corn, sunflower seeds, millet, and milo seed. It doesn’t have to be anything fancy. You can even get away with tossing some out on the ground, since blackbirds like to strut around in the grass and dirt to eat, anyway.

Blackbirds might not be a backyard birder’s most desirable visitor, but it’s hard to not appreciate their bold personalities and beautiful coloring.

Whether your goal is to keep their tone-deaf voices at bay or admire their dreamy plumage up close, you now have the means to identify, attract, or repel blackbirds in your area!

The Cornell Lab. (2020). Yellow-headed Blackbird Overview, All About Birds, Cornell Lab of Ornithology. Retrieved 2020, from https://www.allaboutbirds.org/guide/Yellow-headed_Blackbird

Sydney is a blogger and content writer in the realms of nature, outdoor recreation, and sustainability. Her nerdiness shines on the topics of birds and bugs. Her love for birds was founded in high school academia, reinforced in undergraduate curricula where she received her degree in Zoology and Environmental Studies, and is currently sustained through photography and avid birdwatching. She has worked hands on with several native and exotic species in the field and out, including at the Columbus Zoo and Aquarium and abroad in Australia. You can find her blog, Sycamore and Clay, at sycamoreandclay.com, where she writes to inspire and help people cultivate their own special connection with nature.