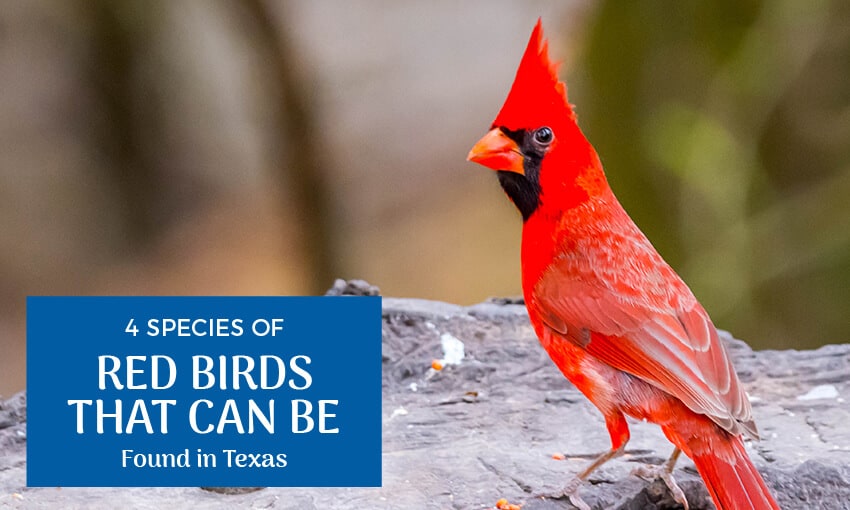 The “red birds” of Texas include birds that are essentially red all over or have red coloration over more than half of their bodies. Four birds met these criteria, including the Summer Tanager, Cardinal, Vermilion Flycatcher, and the Painted Bunting (that just made the cut).   Birds such as the red-headed woodpecker, etc., where the red—although prominent—covers well less than 50% of the body are not included.

The summer tanager is about the same size as the familiar cardinal. Although called a “tanager,” and was classified as a “tanager,” the summer tanager is now considered a member of the cardinal family, (Cardinalidae).[1] Its plumage and vocalizations are similar to other members of the cardinal family. These birds are often out of sight, foraging high in trees, sometimes flying out to catch insects in flight.

Adult male Summer Tanagers are entirely bright red. Females and immature males are bright yellow-green—yellower on the head and underparts and slightly greener on the back and wings. The bill is pale yellow. Molting immature males can be patchy yellow and red. [2]

The oldest Summer Tanager on record was a male that was at least 7 years, 11 months old when he was recaptured and rereleased during banding operations in Texas in 1986.[3]

Summer tanagers migrate annually from their range across the southern United States, south into central and northern south America.[4]

The male’s song consists of melodic notes, repeated in a constant stream separated by short pauses. The song is similar to (but shorter than) the American Robin, typically lasting 2–4 seconds. [5] It also has an agitated-sounding call pi-tuk or pik-i-tuk-i-tuk.[6]

These birds are often out of sight, foraging high in trees, sometimes flying out to catch insects in flight. They may frequent feeders stocked with a variety of seeds. One of their favorite foods is the fruit of the Cymbopetalum mayanum tree found in Guatemala and Honduras. Planting this tree in yards may attract summer tanagers.

Summer Tanagers are not endangered. Overall, their population has remained steady through the 2014 North American Breeding Bird Survey. Local populations have declined due to loss preferred habitat due to conversion of riverside forests to agriculture and other uses.[7]

The Summer Tanager is a bee and wasp specialist. It catches these insects in flight and kills them by beating them against a branch. Before eating a bee, the tanager rubs it on the branch to remove the stinger. Summer Tanagers eat larvae, too: first they get rid of the adults, and then they tear open the nest to get the grubs.[8]

The northern cardinal (Cardinalis cardinalis) is a bird in the genus Cardinalis; it is also known colloquially as the redbird, common cardinal or just cardinal (which was its name prior to 1985).

The northern cardinal is a mid-sized songbird. Males are slightly larger than the female’s. The male is a brilliant red color with a black face mask over the eyes, extending to the upper chest. The female is mostly yellowish-tan with a slight reddish tint in the wings, the crest, and the tail feathers.[9] The female also has a face mask, but it is less defined than the male’s. both sexes have the prominent crest on their heads. Young birds are similar in color to the female. Once prized as a pet, its sale as a cage bird was banned by the Migratory Bird Treaty Act of 1918.

Adult cardinals that survive their first one-two years have a life expectancy up to 15 years. The oldest known cardinal was a captive bird that lived 28.5 years. Due to the high mortality rate of young birds, the average life span of a live hatchling is on the order of one year.

The cardinal is a familiar bird throughout southeastern Canada and the eastern United States from Maine to Minnesota to Texas, and south through Mexico, Belize, and Guatemala. It is also an introduced species in a few locations such as Bermuda and Hawaii. Its habitat includes woodlands, gardens, shrublands, and wetlands.

Cardinals are attracted to seed feeders in residential areas throughout their range. They are particularly fond of sunflower and safflower seeds. In the wild, they are principally ground feeders, searching for weed seeds (about 90% of their diet) as well as insects.

Pairs may mate for successive years, but some also ‘divorce’ between seasons or choose a new mate when one dies.[11] Pairs generally stay together year-round but are not necessarily monogamous. DNA studies of two populations of cardinals found that between 9 and 35% of nestlings were not fathered by the female’s mate.[12]

The northern cardinal is the state bird of seven U.S. states, more than any other species: Illinois, Indiana, Kentucky, North Carolina, Ohio, Virginia, and West Virginia; although in each case the particular state just refers to the bird as the “cardinal.”

The vermilion flycatcher is the most colorful flycatcher in North America. The males are unmistakable with their brilliant red plumage

The vermilion is a striking flycatcher compared to others in its family. The males have bright red—vermillion—crown, chests, and underparts, with brownish wings and tails. Their small, indistinct crest may become more apparent when the bird is agitated.  Males have a bright red head and underparts with a thick dark chocolate brown eye line that connects to the brown nape and back. In bright light, males may appear almost glowing or fluorescent. Females lack the vivid red coloration but, have strong washes of color that make them stand out.[13]

The vermilion prefers wooded streams and lakes and semi-open environments.

Ornithologist David Sibley describes the perching song as a pit pit pidddrrrreedrr, which is variable and important in establishing a territory.[15] The Cornell Lab of Ornithology[16]  describes it as a ching-tink-a-le-tink, with an emphasis on the last syllable. The following is another example of the vermillion flycatchers’ song[17] from xeno-canto.

As aerial insectivores, they catch their prey while flying. Vermilion Flycatchers spend long periods sitting on exposed perches such as the tops of shrubs and fence lines. They watch for flying insects, catching them in midair by quick flights (sallies), and often returning to the same perch.[18]

As magnificent as it is, the painted bunting barely makes it into our collection of “red” birds, but the red rump and underparts are distinctive, providing enough red to be admitted into this group. The male of the species is, perhaps, one of the easiest birds to identify. The female and juvenile painted buntings are green and yellow-green. The colors and pattern provide camouflage from predators.

The Painted Bunting’s song is a series of short, musical phrases of thin, sweet, high-pitched notes lasting about 2 seconds. When establishing territorial boundaries in the spring, a male may sing 9–10 songs per minute from several perches within his territory.

The summer/breeding range of the painted bunting includes the south-central United States (Arkansas, Louisiana, Oklahoma, and Texas) as well along the Atlantic coast from Georgia to northern Florida. They winter in South Florida, Cuba, the Bahamas and Mexico, into Central America where they prefer the shrubby edges along the border of tropical forests or densely vegetated savanna.[21]

They can be seen at the Bird Blinds at Inks Lake State Park and Pedernales Falls State Park. They are secretive birds and males are more commonly seen in the mornings when they sing from the tops of trees. They may also be seen around bird feeders stocked with a variety of bird seed.

Painted buntings are secretive birds and males are more commonly seen in the mornings when they sing from the tops of trees.

When their breeding season has concluded, buntings migrate by night over short to medium distances.

The male painted bunting was once a popular caged bird, but its capture and holding is currently illegal. Populations are primarily declining due to habitat being lost to development, especially in coastal swamp thickets and woodland edges in the east and riparian habitats along winter migration routes through the United States and Mexico.

I grew up on a farm in Virginia, surrounded by creeks and marshes, abundant with all manner of living things. The farm was rich in birdlife, from nesting eagles and fish hawks, to chickadees and wrens nesting around the house. My mother, a teacher, had several bird books and we often sat in the yard or took walks identifying each one we saw. She also made sure I knew about the natural history of each bird—what it ate, where it nested, if it was a seasonal migrant, etc. She instilled an interest in birds—actually all creatures—that has persisted throughout my life, travels, and writing. The farm and my mother’s influence led me to degrees in biology and environmental sciences, after which I became a writer.