7 Birds That Look Like Robins: Lookalikes at First Glance

Robins are, perhaps, one of the most recognizable backyard birds. But even with the most familiar birds, it can be easy to get confused if you are not all that familiar with the avian world.

There are some other common birds that look like robins, and some may confuse with them.

Learning a bit more about the birds you see in your garden, and some other future visitors you might encounter can be a wonderful way to feel closer to the natural world.

So read on to find out more about American robins and how to identify them and distinguish them from some of their lookalikes that you might encounter.

What Are American Robins?

American robins have the Latin name Turdus migratorius. They are one of the Passeriformes in the family Turdidae. They are also the most abundant bird in North America.

Living in open woodland habitats and backyards and often seen tugging earthworms from the soil, they are a familiar ground forager.

You are as likely to see them in an average American backyard as in remote mountain forests and the Alaskan wilderness.

Robins often spend the whole of winter as well as the rest of the year in their breeding range. They like staying on tree branches or tree trunks. Some bird species build their nests in trees, especially with plenty of trees.

But since they spend more time roosting in trees and less time in backyards during this coldest period, you are much less likely to see them at this time and so may well, like many, see these birds as a harbinger of spring.

Robins nest in trees. They can produce three successful broods in a year, though on average, only around 40% of those nests will produce living young, and only a quarter of fledglings will survive until November.

Robin roosts can be enormous and include an astounding 250,000 birds during winter. In summer, males gather at roosts, while females sleep at their nests and will only join the males at the roost once they have finished nesting.

The Robin is the largest thrush in North America. Both males and females are gray-brown birds with rusty-orange breasts and dark heads.

The females look similar, but their heads are paler, more muted, and less differentiated from the body. They have dark eyes and yellow bills, with black at the tip.

Are There Different Breeds of Robin?

American robins are one species. However, seven sub-species of the American robin have been identified. They have varying features and colors, including black bodies, gray heads, orange bellies, and yellow breasts.

Most of these sub-species look very similar. However, there is some change in color depending on where the populations of robins are located.

In the west, robins tend to be paler in color and often have almost no white at the tail corners. While breeding, robins on the Canadian Atlantic coast are very vibrant, with black on their backs and upper necks.

Only one of the subspecies, Turdus migratorius confinis, of Baja California Sur, is particularly distinctive – having gray-brown underparts in place of the distinctive orange-hue.

What Is the Difference Between a Robin and a Thrush?

All American robins are technically thrushes, being members of the Turdus, true thrush genus, and the wider Turdidae, or thrush family. But not all thrushes are robins.

Many other birds are also members of the thrush family or true thrushes like the robin and are related to it. These birds like living in mixed forests.

What Is the Difference Between an American Robin and a European Robin?

One thing to note is that there is another bird called a robin in everyday parlance that should not be confused with the American or European robin.

However, it is not found in North America, though it is common across Europe and south to North Africa and east to Western Siberia.

These birds are also gray-brown on top with red-orange breasts. And in fact, though unrelated, the American robin takes its name from these birds.

Other birds with red breasts are also known as ‘robins’ in other parts of the world. They also have a common breeding season and feed on insects in summer.

Here are some birds that might be mistaken for the American robin, at least at first glance:

This lively warbler is also seen across much of the US, except the west coast. The male is coal-black with bright orange patches on its sides, wings, and tail. Females and juveniles have yellow patterns on a gray background.

While sometimes confused with robins, since they are similar in size and shape, redstarts have entirely black tails and yellow and orange wing coloration that robins do not have.

The males of this species are black, white, and cinnamon orange in color, while the females are somewhat less flamboyant.

While the russet tone of the breast is similar to the robin, the bill, wing, and head color are very different.

This large sparrow of the eastern US has striking plumage in warm reddish brown and bold black hues, with white tail corners while in flight. The female is more brown than black, also with a rufous belly.

Eastern Towees are smaller than American robins and have a stouter, black bill. They have a black hood extending down their breast, and the rusty color is restricted to the sides, unlike the robin with a reddish breast and completely reddish belly.

Orchard Oriole (and other Orioles)

The male orioles are reddish underneath, with black heads and backs. The females are a greenish yellow all over, darker on the back and paler underneath, with darker wings and white wing bars.

Orioles are often mistaken for robins, and there are several with orangish breasts. However, orioles are smaller in size, with a more slender shape.

There are distinctions in their coloration, too, and they don’t have the robin’s gray-brown coloration.

The red-breasted nuthatch is a small active bird of northern woods and western mountains. They are long-billed and short-tailed songbirds.

Adult males have a russet breast similar to the robin, but very short tails, sharp bills, crisp black crowns, white eyebrows, and black eye bands. And as you can see from the above, they are much smaller than a robin. 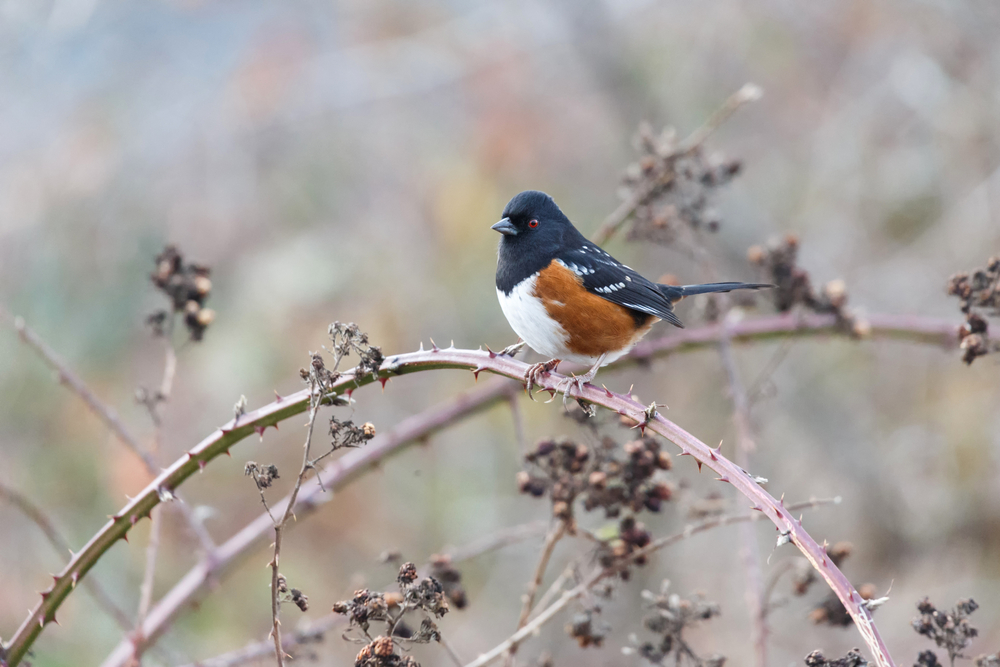 The spotted towhee of the western US is found in sun-baked thickets. The males are gleaming black above, spotted and striped with brilliant white, with rufous orange flanks. The females are grayish brown.

Like the eastern towhee mentioned above, the spotted towhee has a stouter, black bill, and black hood to set them apart from the American robin.

This bird of the Pacific Northwest has a slate-gray (or brownish in the females and immature birds) back, breast band, and a burnt-orange breast and belly.

Varied thrushes have orange eyebrows, a black band across their breasts, and orange wing bars that are not present on American robins.

Orange eye bands and wing bars also distinguish the females and immatures of this species. They also sing melodious songs.

The above is not an exhaustive list of the birds that might be confused with a robin by inexperienced birdwatchers. But it should help you better identify the different birds you might see in your garden.