Woodpeckers In Massachusetts: 7 Species To Behold In The Bay State 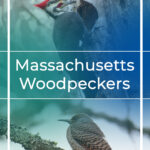 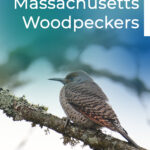 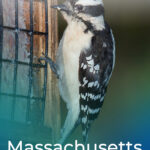 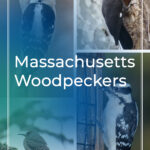 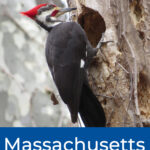 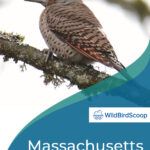 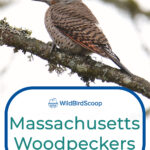 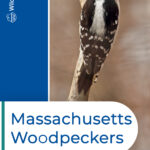 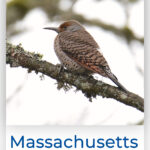 With strong bills made for chiseling away at wood, it’s no surprise that woodpeckers are inhabitants of well-forested areas. Over 60 percent of the state of Massachusetts is forested, making it the 8th most tree-laden state in the United States. This also makes it a perfect habitat for various species of woodpeckers. Read on to find out more about the seven species of this unique bird that can be found in the beloved Bay State.

Downy woodpeckers are Massachusetts’ most common species of woodpecker and the smallest of the seven species found in the Bay State. If you’re near a tree-heavy area, you can almost guarantee you’ll spy one or two of these birds flitting about above you.

The downy woodpecker, more commonly known as “downies” by Massachusetts locals, gets its name from the soft texture found on its back. The bird sports a very unique black and white striping pattern on their back with horizontal bars on their wings. Males and females have slightly different looks, however, as males have a fairly bright red dot on the backs of their heads.

These two types of birds can be mistaken for one another because of their similar black and white striping pattern and red dot, but you can tell them apart by their beaks, as the hairy’s is larger than the downy’s. A keen birdwatcher can also tell these two species apart by looking at their tail feathers. The hairy woodpecker rocks all-white outer tail feathers, while those of the downy are primarily black.

Most of the woodpeckers found in Massachusetts have a variant of the black and white striping the downy woodpecker has, except for the northern flicker.

This fairly large fellow sports gray and brown plumage instead and is commonly found in woodlands, wetlands, and even areas covered with buildings. Even though the northern flicker is one of Massachusetts’s year-round residents, it’s one of the few woodpecker species that migrate.

The northern flicker has zygodactyl feet, enabling it to walk vertically up a tree trunk, which is a jolly sight to be seen.

The pileated woodpecker is one of the largest species of this bird in Massachusetts; it’s almost as large as a crow! This species is most commonly found across conifer forests, but they can be seen around the edges of large cities as well. This bird can be identified by its dominantly black body with white patches going across its wings, and it’s also crowned with a very distinctive bright rest crest on its head.

This species has a notably large beak that can carve rectangular holes in trees, which bodes well for this bird, as our pal the pileated woodpecker finds its main source of nutrition in carpenter ants, who commonly make their homes in moist wood. The pileated favors excavating dead and softwood rather than digging into live trees.

The yellow-bellied sapsucker — a funny name fitting for a funny species with a cat-like signature call and staccato drumming. Listening to this bird is amusing, but could become pretty annoying depending on how vocal the bird feels like being that day.

As the name implies, this species of woodpeckers feed on the sap that oozes out of tree bark after it drills tiny holes into it. The sap also helps attract insects like ants, which are also part of the yellow-bellied sapsucker’s diet.

Like the northern flicker, the sapsucker is another migrating woodpecker. It’s usually seen in Massachusetts during its migration period, but there have been sightings in the winter as well.

The red-bellied woodpecker wasn’t a native of the state of Massachusetts a couple of decades ago, but now, it can be found across the entire state, especially in heavily forested areas. If you hang feeders in your backyard, it’s highly likely that you see a red-bellied woodpecker now and again. Despite its name, the only red sport that can be found on this woodpecker is on its head, with no red patches on its belly whatsoever.

The red-bellied woodpecker sticks its tongue — with males having one that’s longer and wider than their female counterparts — in tree crevices to search for insects to feast on, and in certain seasons, these birds feast on plant materials like acorns, nuts, fruits, and seeds.

The final species on our list is the red-headed woodpecker, which happens to be the rarest woodpecker you’d see in the state of Massachusetts. These birds are often found in wetlands, specifically pine plantations, beaver swamps, and agricultural areas.

These woodpeckers have bold patterns that make them very easy to distinguish from other state-sharing species; adult woodpeckers from this species feature heads that are entirely red, while the juveniles have brown heads.

The red-headed woodpecker is unlike any of the species mentioned above when it comes to food. This exceptional bird has the ability to catch insects mid-flight. Once the food is caught, the bird stores it in tree crevices for later, keeping it safe by covering it with tree bark.

Now that you know about the different species of woodpeckers in Massachusetts, you’ll be able to distinguish them with ease. And while you’ve got the binoculars out, keep an eye out for the blue-headed vireo, black-capped chickadee, and the yellow-breasted chat.