Woodpeckers In Michigan: 8 Species You Can’t-Miss 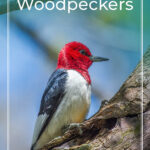 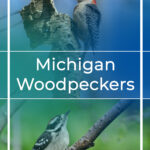 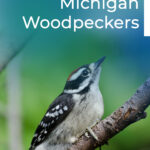 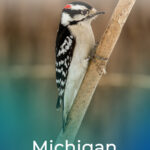 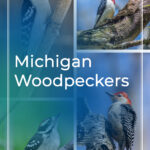 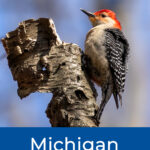 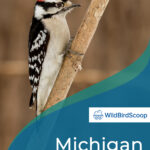 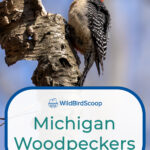 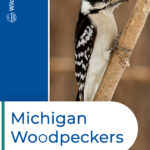 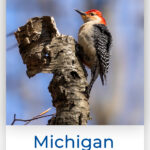 The great state of Michigan is full of pine forests, woodland swamps, and other spots like these that are perfect habitats for woodpeckers. Even public parks like Old Mission Lighthouse Park, Sleepy Hollow State Park, and Lincoln Brick Park are excellent spots for woodpecker watching, especially if you’re hoping to see the red-headed woodpecker.

In total, eight species of woodpeckers can be found in Michigan. Some of them are year-round residents, while others tend to migrate. In this post, we highlight all eight of those species so that you know what to look for next time you find yourself in the Great Lake State. Let’s jump right into it!

The downy woodpecker is the tiniest and most common species of woodpeckers in all of North America. This small fellow doesn’t find Michigan’s harsh winters to be problematic, so it’s not a migratory bird; you can easily spot downy woodpeckers throughout the entire year in Michigan and other states.

The downy woodpecker is a sucker for seeds and nuts, which is why you’ll probably see one or two of them around your feeders, especially those that are intended to attract hummingbirds.

Downy woodpeckers are also quite fond of insects, and they like to hammer away at dead trees to find them. This makes sense, as these birds are often found living in dead trees as well.

This species has distinctive black and white patterns on their bodies with white spots covering their black wings. Males stand out from females by having a red spot on their heads.

Also getting confused for our red-bellied friend is the red-headed woodpecker since the males of the former species have red heads as well. If you take a look at a picture of the two, however, you’ll notice that they’re actually very different from one another.

As the name implies, this tiny fellow sports a red hue on its belly, but this can sometimes be so faint that it’s not even noticeable, which is one reason why distinguishing this species from their downy cousins may prove to be difficult.

The red-bellied woodpecker is often found in woodland areas, but it’s not uncommon to find one in a suburban area. Generally, wherever deciduous trees grow in Michigan, this woodpecker is most likely nearby.

Although the red-bellied isn’t a migratory woodpecker, it can be forced to head south if the weather gets too harsh in Michigan. If you’re anywhere near the southern half of the state’s lower peninsula, you’re guaranteed to find swarms of red-bellied woodpeckers there.

Hairy woodpeckers flaunt a very similar striping pattern to the downy woodpeckers, however, hairies are larger and less common than the downies. Hairy woodpeckers are super energetic compared to their cousins from other species and are also very powerful in terms of drilling and excavating trees, as they love scavenging for insect larvae.

The hairy woodpecker is a very adaptable bird, which is why you can find massive swarms of them all over North America. As long as there are trees they can nest in and gather food from, they’re good to go. They can, however, be run off by starling and sparrows.

Hairy woodpeckers aren’t limited to certain areas in Michigan, meaning you can find them all over the state in moderately forested areas. Like their downy cousins, hairies aren’t migratory birds and can typically handle Michigan’s winter without any problems. But if it gets bitterly cold, they might be forced to head south.

As far as size is concerned, pileated woodpeckers are the biggest species of woodpeckers in North America. Experts say these birds inherited this title after the extinction of the ivory-billed woodpecker. The pileated is quite shy compared to other woodpeckers, so be careful not to get too close, as it’s easily scared by humans.

The pileated woodpecker isn’t a migratory bird, meaning that it can be found in the Wolverine State throughout the year. However, it’s less common in the southeastern part of the state.

The red-headed woodpecker is arguably the most stunning species of woodpeckers in all of North America. This small fellow’s head is all red, with black and white stripes covering the rest of its body, while the youngins of this species have brownish heads rather than crimson.

Red-headed woodpeckers aren’t very fond of populated and restricted areas. They favor large, spacious forests with trees that are high off the ground. Pine farms, for instance, are an excellent example of a red-headed woodpecker’s natural habitat.

This species of woodpeckers feed on nuts and insects. They tend to travel in groups and nest in cavities. They have an unusual trait of being able to hunt insects mid-flight, a trait also found in Lewis’s woodpeckers.

Red-headed woodpeckers aren’t year-round dwellers like some of their woodpecker cousins; you can only find them in Michigan during the winter. If you want to watch the red-headed all year long, you’ll have to head someplace south.

Northern flickers are some of the most interesting species of woodpeckers because, unlike others, they’re not very fond of excavating and hammering away at trees. Instead, these distinct-looking fellows are into feeding off the ground. They flit about, picking off ant by ant. They do hammer away at trees casually, but this is mostly a way of communicating with their flicker friends.

The northern flicker has a red-tipped head, a white underbelly with black spots, and a tail that’s lined in yellow. Males are different from the females, as they have black marks on their cheeks that look a bit like mustaches.

Size-wise, the northern flicker is larger than average, and it can withstand different climates with no problems. You can find the northern flicker all over the state of Michigan throughout the entire year. As we mentioned before, this bird prefers not to do much excavating, so it opts for finding pre-existing cavities to live in.

Yellow-bellied sapsuckers are tree branch dwellers and aren’t typically found near feeders. As indicated by their moniker, these woodpeckers love to feed on sap. They like to drill holes into trees, preferably maple or birch, and stick their lengthy bills in these holes to suck out as much sap as possible.

The yellow-bellied sapsucker is usually found in the northern upper part of Michigan, and this bird can be identified by its pretty distinct shape and features: they’re mostly black with hints of red around their bills and yellow markings around their chest.

Black-backed woodpeckers can be found in Michigan’s upper peninsula throughout the year and extend further into Canada, as they’re able to tolerate the frigid winter weather.

These birds have black bodies with white undersides, and males set themselves apart from females by sporting a yellow crown on their heads. This peculiar species of woodpeckers favors living and feeding in burnt forests, with boring beetle larvae as their favorite food.

This black-backed bird is quite fond of digging, and for this reason, it doesn’t use the same nest twice. During every cycle of breeding, this bird prefers to dig a new nest.

One more thing to note: the black-backed woodpecker is a pretty vocal creature. We wouldn’t say that it’s necessarily aggressive, but it’s definitely not timid.

There you have it, bird watchers, the eight most common species of woodpeckers found in Michigan. You should also be on the lookout for the American robin, Columbidae, and the New World orioles next time you find yourself in the Wolverine State. Happy bird watching!