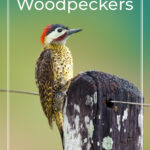 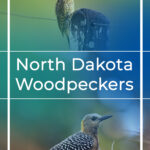 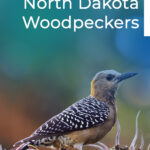 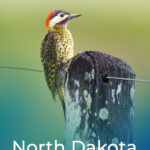 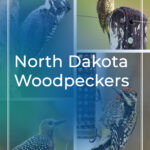 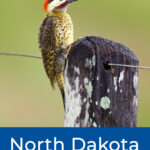 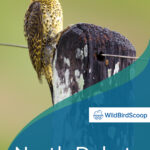 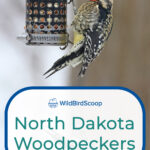 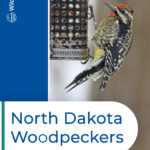 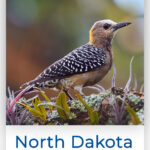 North Dakota amazes tourists of all nations with its geography, agriculture, and wildlife. Among roaming buffalo, jumping antelopes, and serene deer, woodpeckers fly and occasionally swoop down to greet its many citizens and visitors.

In this article, we’ll discuss all the known woodpeckers in North Dakota, how you can identify them, and where you’re likely to find them.

The red-headed woodpecker is a medium-sized bird known for its distinctive blood red head, throat, neck, and breast. The underparts are white, while the upperparts are mostly black, except for a large patch of white feathers on the wings. These woodpeckers are explicitly monomorphic, meaning that males and females are pretty much indistinguishable.

The redheads’ strong bills help them dig up large holes in wood to discover insects hidden inside, but they tend to eat and hoard nuts in the colder time of year. They can also catch bugs while flying, just like flycatchers.

Unlike other woodpeckers, this species is incredibly protective of its territory. They invade spaces occupied by other birds to ravage nesting areas, steal food, and puncture eggs, which is probably why these birds symbolized war for the Native Americans.

These woodpeckers migrate into North Dakota in late spring or early summer.

The next woodpecker on our list is often mistaken for a crow because its white feathers are often smudged black. Meet the black-backed woodpecker, or, as some birdwatchers call him, the Arctic three-toed woodpecker.

You’ve probably already guessed this because of its name, but this bird has a solid black back, and its face is marked by a single white stripe. Like many other woodpeckers, males of this species sport a patch of yellow feathers on their crowns.

You can commonly find our friend the black-backed woodpecker in burned forests and tree trunks infested with bark beetles, meticulously foraging for insects to eat.

Generally, nest excavation in North Dakota happens in April and May. Interestingly enough, after a female lays three or four eggs, incubation duties are shared between both sexes, with the male incubating the eggs primarily at night while females take over during the day.

Another fun fact about the black-backed woodpecker: birds of this species have only three toes on each foot, an evolutionary trait that allows them to drill harder on tree trunks.

The medium-sized green-barred woodpecker has a passion for ants and termites. These birds catch the bugs using their long tongues and saliva, and when they’re not scavenging for insects, find them feeding on fruits, like berries and cactus fruits.

You’ll know this bird by its yellowish-green hue, complete with a barred lower back and upperparts. It sports a black forehead and a red crown. A male of this species has a red stripe that grows above his culmen, while this area on females is black instead.

If you don’t happen to see any of these birds, you just might hear one, as they are known to enjoy singing for a considerable duration of time.

To the untrained eye, Hoffmann’s woodpeckers look a lot like Golden-fronted woodpeckers, but if you take a closer look, you’ll see that birds of the Hoffmann’s species sport a yellow forehead. Their bellies are cream-colored, and they have a black and white barring pattern on their backs and flanks.

Just like many other woodpeckers found in North Dakota, these birds can be spotted in a garden area, pine woodlands, near shade trees, and orchards. They primarily feed on juicy insects, but they won’t say no to the occasional fruit, seed, or sip of nectar.

These woodpeckers reside mainly in southern Honduras and northern Costa Rica, but they find their way to North Dakota during the breeding season. To bring these birds to your backyard, fill a feeder with suet, and if you’re lucky, they may stop along their migration route to feed for a couple of days before flying along on their way.

The yellow-bellied sapsuckers were first described and illustrated by English naturalist Mark Catesby between 1729 and 1732, making them one of the oldest species of woodpeckers alive!

Like any other sapsucker, these medium-sized woodpeckers drill rows of sap wells into tree bark to sip the leaking nectar. They also feed on any insect that might’ve found itself trapped inside the sticky liquid.

Many people often mistake this bird for a downy or hairy woodpecker because they all look quite similar, but when compared to downies and hairies, yellow-belled sapsuckers generally appear more “disheveled.” Both males and females of this species have red foreheads, but only the males don red throats.

They’re commonly found in conifer forests, which make up 5.8 percent of the total forest land in North Dakota. During the winter, they can be seen visiting bird feeders to devour suet, especially when they can’t find other food sources.

This woodpecker was named after Meriwether Lewis of the Lewis and Clark expedition. Lewis was one of the wayfarers who looked through the zones bought by the USA in the Louisiana Purchase.

Lewis’s woodpecker is a medium-sized bird with a dim red face and silver collar while its nape, back, wings, and tail feathers are dark green. The tail, cap, and legs are largely dark, while the feet are silver and the stomach boasts a reddish-pink tone. Both males and females are similar in appearance, but males are typically bigger than their female counterparts.

In spring and summer, flying bugs make up most of this woodpecker’s diet, but when fall and winter roll around, they switch gears and feed mostly on fruits, oak seeds, nuts, and seeds.

These woodpeckers reside primarily in the southern states, particularly New Mexico and Arizona. However, they migrate north to mate in North Dakota, Montana, Wyoming, and parts of Canada. You can find them in pine forests, especially around dead trees.

These birds are more than just pretty to look at; they’re helpful, too! Most of North Dakota’s woodpeckers eat insects found in tree bark, and this eliminates the chances of these bugs damaging the tree later. And the best part? It typically doesn’t hurt the trees at all!

Interested to know more about woodpeckers? Check out our list of the 8 species you have to see in Maryland!