Woodpeckers In New Mexico: 9 Species To Search For 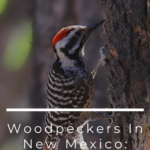 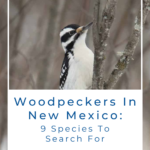 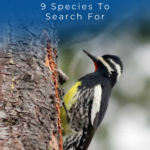 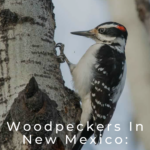 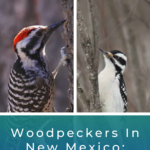 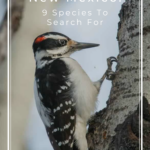 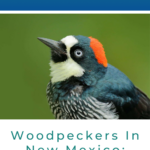 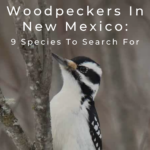 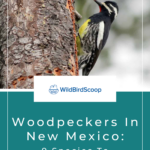 With more than 16.7 million acres of forest land, New Mexico is home to about 540 bird species, ranking fourth after California, Texas, and Arizona. Such diversity makes it one of the best destinations for avid bird-watchers.

In this article, we’ll focus on all of the woodpeckers to be spotted in the Land of Enchantment. You’ll know where you can find them, how to tell them apart, and the best times to spot each of them during the year. Let’s dive in!

The most distinctive features of the downy woodpeckers are their notably small bodies and tiny bills, which make them look like black and white sparrows. They have white underparts and checkered wings topped off with a striped head. Males show a reddish nape, while females sport one that’s black instead.

Because these woodpeckers are permanent residents of New Mexico, it’s fairly common to see these birds everywhere. They especially love visiting backyards to eat suet, fruits, and seeds.

The hairy woodpeckers look strikingly similar to the downy species — they have black and white wings, white underparts, striped heads, and even a male-specific reddish nape.

The telltale difference is the size and bill shape. Not only are the hairy woodpeckers larger, but they also have longer, more pointed bills.

Unlike their lookalikes, hairy woodpeckers don’t drop by backyards very often, even though they’re also permanent residents in New Mexico. If you want to sneak a peek at one, you should search around coniferous trees; they particularly love the deciduous ones.

From a distance, it’s easy to mistake Lewis’s woodpecker, named after famed explorer Meriwether Lewis, for a crow since it has a dark head and wings. But when you get closer, you’ll see a pink belly, green collar, plus faint greenish tints in the wings’ feathers.

During summer, these woodpeckers breed mainly around the Mogollon Mountains in northern New Mexico, but when the winter begins, some of them head south to the Pecos Valley. Sadly, they don’t typically visit backyards because of their timid nature, but if you keep your eyes pointed toward the sky, you may see one swooping through the air to catch a flying insect for its next meal.

The acorn woodpecker is well known for its bright red crown, yellowish forehead, creamy white throat, and the black patch of feathers surrounding the bird’s spike-shaped bill. This woodpecker’s upperparts are majorly black, but its underparts show black and white streaks.

As the name implies, these woodpeckers are fond of hoarding acorns in their tiny nests, which secures a sustained food source during harsh winters.

In New Mexico, you’re supposed to see them throughout the year, but this depends on how much food they manage to stockpile during the year. If couldn’t gather enough acorns to sustain them in the colder weather, they’ll winter in Mexico’s Sierra Madre mountains.

To increase your chances of spotting these medium-sized birds, head to the central parts of Albuquerque and Santa Fe. You can find them throughout the year in most parts of New Mexico, but this is where they mostly breed.

During the breeding season, these sapsuckers will be foraging for ants and other insects, but usually, they feed themselves by drilling small holes into coniferous trees and eating the sap, inner bark, and any other bugs that find themselves in the bird’s path as it eats.

Though the name implies a bold, bright red cluster of feathers on this bird’s neck, the red-naped sapsucker has but a teensy red patch on its nape, which proves to be difficult in identifying this species. Instead, look for their red cap and throat, striped face, mottled belly, and checkered wings.

To lure these woodpeckers into your backyard, hang suet feeders in properly shaded areas. You’ll be more likely to spot them if you have aspen, birch, or pine trees in the neighborhood. If you see their sap wells, you’ll know they’re around, but their loud wailing calls and stuttering drum patterns are other surefire ways to locate these sapsuckers.

But the winter starts, you’ll want to put your search for the red-naped bird on hold; they’ll be migrating south.

The ladder-backed woodpecker can be seen throughout New Mexico, but they’re particularly common around the southern areas. As with many of their woodpecker cousins, they’d be happy to visit your backyard if you hang a few suet feeders.

You’ll know this bird by its evenly spaced black and white stripes on the back, which make a pattern that largely resembles a ladder; its underparts are mostly white with small black spots. Males are adorned with bright red crowns, while females wear a black patch instead.

A northern flicker is primarily a brownish tone, which sets them apart from most woodpeckers. They also boast other characteristics specific to them, such as a black chest and mottled underparts. Males have red napes while females show a predominantly brown head.

Even though they bear the word north in their name, these birds are actually year-round residents in New Mexico. But if the summer temperatures get too hot, they might migrate north to breed before returning in the winter.

Just as you’d assume from its moniker, the American three-toed woodpecker is famous for having three toes — one facing backward and two facing forward. Unlike the previous species, these woodpeckers aren’t that common in New Mexico. However, you might be able to spot them if the winter was too harsh in the north.

Start your search for this bird in a wooded area that’s been disturbed by something like a beetle infestation or fire. This woodpecker will more than likely be chipping away at dead or dying trees to get to insect larvae that lie just below the surface.

The American three-toed woodpeckers are almost as small as the downy species, but they have longer, stronger bills. Males can be identified by their yellowish forehead.

There you have it, a brief overview of the wonderful woodpeckers you may spot soaring through the New Mexico sky.

You may not see every bird we’ve listed above in one trip, but if you find yourself in the right places at the right time, you just might be able to cross one or two of these species off your must-see list. Happy birdwatching!