Woodpeckers In New Jersey: 7 Species To Be Spotted 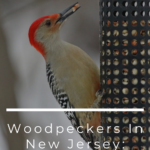 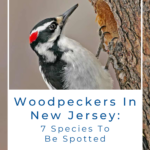 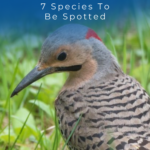 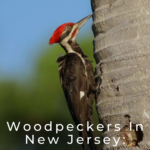 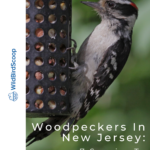 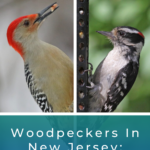 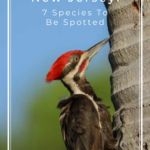 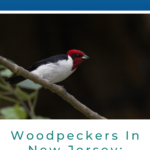 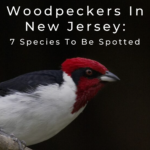 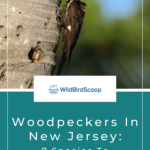 Even though New Jersey is the most densely populated state in America, it still houses a fairly diverse birdlife — which makes sense, considering it’s commonly known as the Garden State!

In this post, we’ll zoom in on all woodpeckers in New Jersey. You’ll find out about their appearance, behavior, seasonality, and more. Without further ado, let’s get going!

With a maximum length of 7 inches, the downy woodpeckers are the smallest, cutest species alive.

The downy woodpecker has entirely white underparts and mostly black upperparts. The wings show characteristic rows of white circles while the back features a large white patch of feathers. Males are adorned with bright-red napes and females substitute with black patches.

Luckily, these woodpeckers are permanent residents in New Jersey. And because they aren’t as timid as most woodpeckers, they often visit residential backyards, searching for suet, nuts, fruits, and even insects.

In the wild, these woodpeckers live in open woodlands, particularly those featuring deciduous trees and bushy shrubs.

Novice bird-watchers might have a hard time telling hairy and downy woodpeckers apart, and we don’t blame them! These woodpeckers look astonishingly similar: They have the same mottled wings, white underparts, reddish napes (in males only), and cute stance.

But the question begs itself: Does the identical appearance equate to similar behavior? Not exactly. Although the hairy woodpeckers are as friendly as the downies, they don’t drop by backyards as often, which is why you might not easily spot them in the busy neighborhoods of New Jersey.

The red-headed woodpecker has a simple yet incredibly unique appearance. The underparts are entirely white, while the upperparts are halved into black and white areas. The head is distinctively colored in bright red feathers, making these woodpeckers look a bit like vicious, barbaric warriors.

And believe it or not, they’re actually kind of evil! They tend to raid the nests of other birds to tear the overall structure and puncture the eggs.

Unlike the aforementioned species, the red-headed woodpeckers were heavily affected by the rapid population growth in New Jersey. In fact, the state’s Department of Environmental Protection has listed them among the threatened species in 1979. If you want to improve your chances of spotting one, hike inside one of the large forestlands, such as the Wharton State Forest.

When searching for red-bellied woodpeckers, don’t count on their name to give them away. These species actually have pale pinkish bellies that few would ever perceive as “red.”

If you want a simpler identifiable feature, look at the head. In males, you’ll see a bright red patch of feathers spanning between the bill and back. In females, that patch is limited to the nape. You can also recognize them by the black and white stripes occupying their back and wings.

These woodpeckers are year-round citizens in New Jersey. Although they’re friendly enough to scout backyards for food, that mostly happens during winter when other sources of food go scarce. Though they prefer to munch on insects, don’t hesitate to serve them fruits and seeds in addition to the typical suet when the winter months roll around.

Our friend the northern flicker is mostly yellowish-brown in color. The underparts are mottled with black spots, while the upperparts show black stripes. Males are adorned with red napes, while females are colored in solid brown.

Unlike most woodpeckers, the northern flicker has a bill that curves slightly downward, affecting their ability to chisel bark. As a result, they often land on lawns to peck the ground and hunt for ants and other insects to eat.

These woodpeckers are supposedly year-round residents in New Jersey. However, their population might plummet sharply in the next few years due to the high deforestation rate and the heavy use of chemical pesticides on lawns. If you want to house them in your backyard, consider leaving some dead logs there.

Beginner bird-watchers can easily identify pileated woodpeckers by their flaming crests and large crow-sized bodies. Both their underparts and upperparts are colored in black, except for a white patch that runs down from the head and stops under the wing.

Thanks to their excellent adaptive abilities, they successfully survived the woodland encroachment in New Jersey. However, it might be quite hard to spot them there because they’re somewhat shy. But don’t be discouraged; your chances of spotting our pileated pal get significantly higher during mating season in the spring.

The yellow-bellied sapsuckers look relatively similar to downy and hairy woodpeckers. However, you can easily recognize them by their red forehead. Sporting a red throat makes males of this species even harder to miss.

In summer, these woodpeckers mate in Canada and some northeastern states, including Maine and Vermont. When the winter comes, they migrate south — some stop at New Jersey, but the majority keep going until they reach Panama. Hang several bird feeders filled with suet, nuts, or fruit in your backyard to encourage them to drop by!

If you’re planning to visit New Jersey soon, you’ll definitely enjoy your time at places like Liberty State Park, Cape May, and Atlantic City. But don’t forget to drop by green areas like the Delaware Water Gap and Paterson Great Falls.

In these woodlands, you’re almost guaranteed to spot downy, hairy, and pileated woodpeckers. If you go there during winter, you’ll probably catch a glimpse of the red and yellow-bellied species.

Unfortunately, New Jersey currently houses dangerously low populations of the red-headed and flicker woodpeckers. But as habitat awareness grows, our fingers are crossed that this changes soon for the sake of our feathered friends.