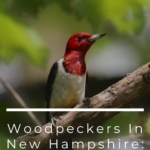 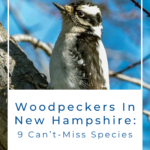 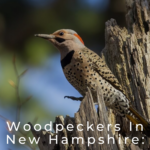 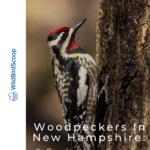 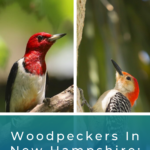 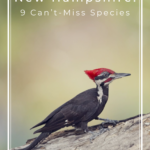 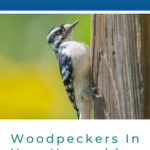 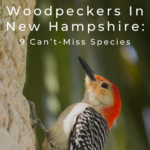 With more than 4.8 million acres of forest land, New Hampshire is the second most forested state in the United States. We definitely love seeing its mesmerizing vistas of fall foliage, especially around the Great North Woods.

While gazing upon these trees, you’re bound to notice one or two woodpeckers drumming at the bark to feed on the insects living there. While you can just sit back and enjoy such beautiful behavior, it’ll be much more fun if you can identify the species in front of you.

In this post, we’ll tell you how to spot and recognize all woodpeckers in New Hampshire by their appearance, behavior, seasonality, and more!

Downy woodpeckers are one of the friendliest woodpecker species. Their population is continuously prospering because they always find an easy food source at backyard feeders.

You can easily identify them by their small size and tiny bills, which look like those of sparrows. Their wings show a black and white pattern with a large white patch running in the middle, but their underparts are mostly white. Males have a characteristic red patch on the back of the head.

As one of New Hampshire’s permanent residents, you can see these birds throughout the year.

At first glance, you might mistake the hairy woodpeckers for a downy — after all, they share the same color pattern, including the male-specific red patches.

So how can even a beginner birdwatcher tell them apart? The size, of course! A hairy woodpecker grows 2 times larger than its downy cousin, and it sports a bill that’s larger and a bit pointier.

Although the hairy woodpeckers are as friendly as their lookalikes, they’re not quite as social; rather than feasting at backyard feeders, they tend to forage for insects to eat on oak and pine trees.

Thanks to its striking appearance, you won’t need any birdwatching experience to identify these red-headed beauties.

Red-headed woodpeckers’ heads are entirely bright red, their underparts are white, and their wings are split in half with a black top and a white bottom.

Sadly, changes in climate and habitat have led to a currently declining population for these woodpeckers. You can still spot them during a New Hampshire summer, but when winter comes, they’ll migrate south to search for warmth.

Despite their name, the red-bellied woodpecker has a pale white belly with faint reddish spots. If you want to be sure you’ve identified this bird correctly, look at its head — you’ll find a bright red patch of feathers spanning across the cap and nape.

Just like their red-headed cousins, these woodpeckers typically migrate south during winter. However, they’re more likely to overwinter in neighborhoods that have a generous number of backyard feeders.

Northern flickers are mostly brown, which is often enough information to identify them. If you want to be certain, though, look for a black crescent-shaped patch of feathers underneath the bird’s neck, bright yellow highlights underneath the wing, and a red patch over the nape.

Unlike most woodpeckers, our Northern flicker friends prefer to peck the ground for food, searching for ants and beetles to eat. With that being said, however, they remain willing to head to backyard feeders to devour suet. And since they can live up to 6 years, they often develop permanent relationships with homeowners.

The pileated woodpeckers are the largest species found in North America. They are famous for their prominent red crests, which supposedly inspired the character design of Woody Woodpecker. Their bodies are entirely black, except for a white patch that drops from the head.

Although these woodpeckers are permanent residents in New Hampshire, you’ll need to head to forests and dense parks to have a high chance of spotting them. They thrive in mature forests full of dead trees and fallen logs for them to dig into.

If deep holes in wood aren’t enough for you to identify this species, keep your ears open to the pileated woodpecker’s deep drumming and shrill caws.

As you probably guessed from this species’ name, yellow-bellied sapsuckers have yellowish-white bellies, but spotting that from a distance isn’t always easy. Alternatively, look for a bright-red forehead and black and white upperparts. Note the colors of the throat area, too — the feathers there are red on males and yellowish-white on females.

To spot these woodpeckers, it’s better to search during the breeding season, particularly in spring. They’ll then migrate south to winter in warmer lands.

Because they share the fairly common characteristic of a black and white body with many other woodpecker species, the American three-toed woodpeckers are pretty hard to identify. The males are slightly more distinguishable, thanks to their yellowish foreheads.

If you’re lucky enough to get close to this bird, though, you’ll notice that these woodpeckers have only three toes: two pointing forward and one facing backward.

Despite the name, the American woodpeckers breed mostly in Canada. You can still spot them in New Hampshire, but only in the northern regions, particularly around the White Mountains.

It should come as no surprise to you that black-backed woodpeckers belong to the same genus as the American three-toed species, which is why they share the same black and white color scheme and male-specific yellow foreheads.

Though they look like their three-toed cousins, black-backed woodpeckers differ in behavior, usually cawing louder and asserting more dominance over claiming feeding and nesting areas.

They’re also native to Canada and Alaska, but they winter in New Hampshire with a much denser population than their cousins.

The downy, hairy, pileated, and northern flicker woodpeckers are the three most common species in New Hampshire. While downies and northern flickers usually drop by backyards, the hairy and pileated species prefer to stay inside forests since they’re a bit timid.

If you’re visiting New Hampshire during the summer, you’ll probably see both the red-headed and the red-bellied woodpeckers.

Last but certainly not least, the black-backed and the American three-toed woodpeckers visit New Hampshire during the winter after they breed in Canada. Make sure they feel welcome!

Whatever time of year you find yourself in the northeastern state, there’s a chance of catching a glimpse at one of the woodpeckers we mentioned above, so be sure you’ve packed your binoculars, keep your eyes peeled, and refer to this list often to track what you see.