Woodpeckers in Maryland: 8 Species You Must-See 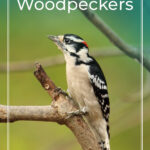 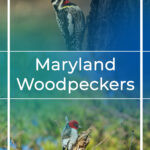 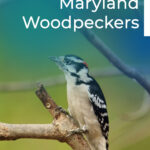 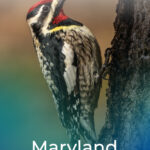 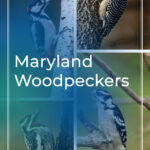 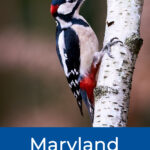 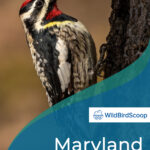 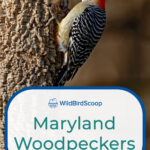 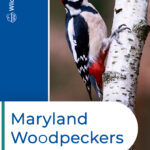 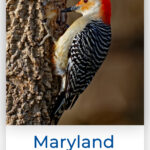 Once nominated as the fifth greenest state in the country, Maryland embraces a score of woodlands. It’s got the habitat, so for sure it’ll have the inhabitants.

What more beautiful inhabitants of woodlands are there than woodpeckers?!

Woodpeckers aren’t the type of birds that are human-shy. They hang around populated areas rather comfortably. Thanks to that, the people of Maryland have special sightings of these birds at their disposal.

Even if they damage property or two by their pecking, woodpeckers are still adorable creatures. That peculiar, quick, and rhythmic pecking of the trees they do, most of us get to see only in cartoons.

Lucky you and your sightings people of Maryland, especially those of you that are birders!

For those of you who live in this beautiful city or eager to visit it, here’s a list of all woodpeckers in Maryland.

With a distinctive strip of white in the wing and a red forehead, this is the most hardheaded on our list. Not only does it peck at wood, but it’s fine with metal too! It loves pecking at street signs, as they amplify its callings for mates.

It’s not all noise and no use, though. The way yellow-bellied sapsuckers feed highly benefits the ecosystem of the forest. They feed by drilling holes in which the sap of the tree collects, then feed on it.

Also, migratory birds feed on these sap-filled holes. More so that than 35 species of them do so! Animals and insects take advantage of these sap pockets as well.

The male and female of this species are an exemplary couple; they both feed their chicks. They even feed them with sap-coated insects sometimes!

Red-headed peckers can be found in the countryside. This country-loving woodpecker is one of the species that are not that far from extinction. Once, it made the IUCN red list of threatened species, included in the category of the most threatened.

Presently, its population increased a bit, so it moved to the least concerned section of the list. The migratory bird treaty act, which safeguards endangered birds from capture, is believed to have a role in this. Another factor was the admirable increase that habitat management has witnessed.

As red-headed woodpeckers love acorns, you’ll probably find them where oak trees are. They’re also attracted with ease to backyard bird feeders. All you have to do is fill these feeders with nuts, and they’ll flutter hurriedly to it.

These woodpeckers feed through hawking. Hawking is a maneuver birds use to feed. It entails snatching insects out of the air and eating them while flying.

That doesn’t mean that ground insects are spared from eating by these birds. They’re also okay with eating nuts, fruits, and maybe even small mammals, like rodents!

They’re called red-bellied woodpeckers, though they’re not so red-bellied. Their bellies are white, and their backs are stripes of white and black. What’s red are the heads of their males.

These woodpeckers are known for being noisy and vocal. They have distinctive drumming and tapping sounds, which they use to attract a potential significant other. So their loud sounds will be especially heard throughout their breeding season in the late winter.

These birds are especially found in wetlands and at river bottoms. They’ll mostly be on main branches of trees, in close proximity to their food storages. They have a habit of storing food in the cracks they make in trees.

What especially helps them to get to the food they’ve stored are their long tongues. Such tongues also help in capturing insects deep inside tree-trunks. One of their favorite foods to store is poison ivy berries. Yes, these berries aren’t poisonous to them, unlike humans.

This woodpecker has a black and white color pattern. Black colors its head and nape, while its cheek patches are white.

A red streak that’s called a cockade is sometimes seen on its cap. That rarely-seen cockade is what it’s named after.

These birds are pine lovers; large pine trees are their favorite habitat, and pine fruit is their favorite food. Among the 160 species of trees in Maryland, pine trees booked their spot. They live in the cavities they dig in these trees. They also predate on insects like spiders, caterpillars, and cockroaches.

There’s a fungus that teams up with them against pine trees, called the red heart fungus. This fungus infects pine trees softening their bark, making cavity excavation a whole lot easier.

There are two woodpeckers on our list that are look-alikes. Hence, they’re easily confused. These two are The downy woodpecker the hairy woodpecker, which you’ll learn to tell them apart very soon.

This bird can be a huge economy-savior for the US, as it feeds on the moth known as European corn borer. This moth costs the agriculture industry about $1 billion a year because of what it does to the crops.

They’re a familiar visitor to backyards with bird feeders, where they eat peanuts and suet provided by homeowners.

Hairy woodpeckers have black wings and upperparts with white bellies and pale white backs. They have white streaks over and under their eyes as well.

What distinguishes hairy woodpeckers from downys is a long bill relative to the head and an absence of spots in the white feathers of the tail. Hairy woodpeckers are also bigger.

Hairy woodpeckers are the kind of birds that settles in one place for the most part. Only the ones in the mountains or the extreme north are prone to migration. With Maryland being a land of over 60 mountains, hairy woodpeckers in Maryland are inclined to migrate.

These mostly-black woodpeckers are the largest among their counterparts in the United States. Besides black, there’s a white color that appears in the underparts of their wings.

Also, they have a characteristic red crest or cap over their heads. They’re named after this cap, as the word “pileatus” is Latin for “capped.”

The holes they excavate in trees are characteristically triangular. These holes are attractive to other types of birds to come and feed. Birds that take advantage of these holes include other woodpeckers and House Wrens.

This is a bird with 100 names. Over 100 names and folk names are known to be attached to this bird, including black-heart woodpecker, yellowhammer, and golden sapsucker.

With regard to the color pattern, there’s a necklace of black rounding its neck and upper chest. In contrast, its lower chest is colored beige with touches of black.

There’s an identifiable black mustache on the cheeks of its males, distinguishing them from females. Another variant of this distinguishing mustache can be red instead of black.

Among woodpeckers, the northern flicker is the only one that depends mostly on the ground for its feeding. Northern flickers also use the hawking maneuver, which is catching insects while flying. Their favorite meal is ants. Ants constitute 45% of what they eat!

When it comes to nesting, it has a competitor that’s always crowding it out. A known rivalry exists between northern flickers and starlings over nests. Northern flickers try to route around that by delaying their nesting to avoid such encounters. That doesn’t seem to help them much.

Woodpeckers are charming creatures, and they exist in abundance in Maryland. Another state that’s remarkably rich in woodpeckers is Florida. So you know where to go if it’s woodpeckers you’re after!

Hope you get yourself cool photographs of the fantastic woodpeckers in Maryland, so you can show them off to your friends and family!