Which Ducks in New Hampshire Can Be Spotted? 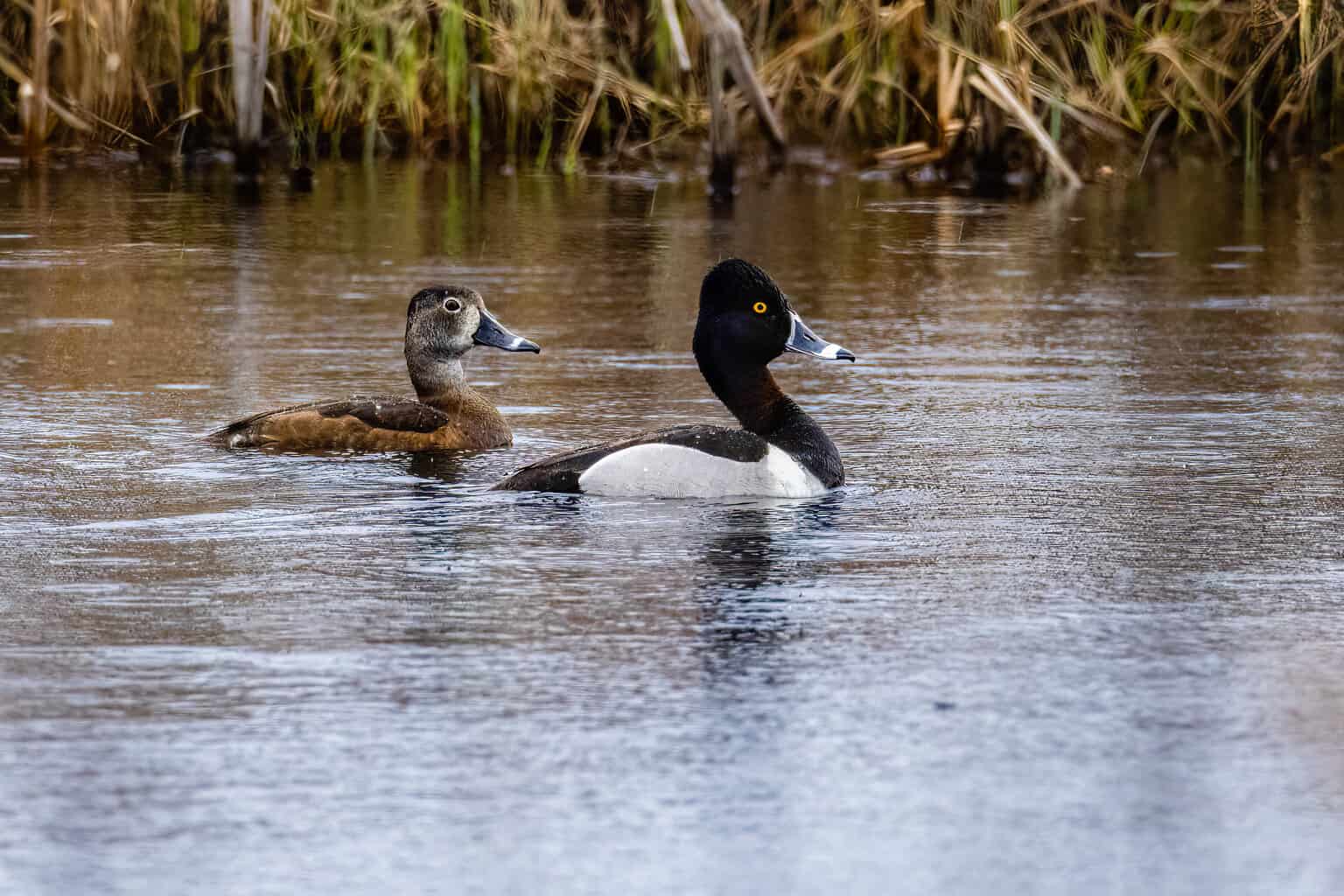 In New Hampshire, you will find many different ducks – dabbling ducks, sea ducks, and divers. As you will see from the list below, this is a varied group.

Some are present in the state year-round, some in winter, and one only in summer. There is also a number of ducks that will be spotted here only during their periods of migration.

Read on to find some of the duck species you might encounter in this state, when and where you might see them, and how to identify them.

These large ducks can be spotted in New Hampshire year-round. The males are easily spotted with their green iridescent heads. Both males and females have a patch of blue feathers on their wings called a speculum. Otherwise, the female mallard is brown and speckled all over.

These are perhaps one of the most recognized duck species of all, and you are likely to be familiar with them even if you don’t know many other duck varieties. As well, mallards are very comfortable with people, so snapping a photo shouldn’t be too difficult!

Though wood ducks are present in the state of New Hampshire all year round, you are most likely to see these medium-sized ducks here between March and October.

The males have stunning green heads with a striking crest at the back, black and white markings, and red eyes. Over the rest of their plumage, there is a range of colors and patterns, with reddish brown, buff, brown, white, and blue patches.

The females also have blue patches and are otherwise brown, with gray-brown heads and white-rimmed dark eyes.

You can encounter an American Black Duck in New Hampshire throughout the whole of the year. Like the two above, these are dabbling ducks.

These ducks are large and heavy, and both males and females have dark brown bodies and pale brown heads. Males have yellow bills and the bills of the females are olive in hue.

The only bright hues found on these birds are blue-purple patches on their wings and their reddish-orange legs.

Another dabbling duck to look out for in New Hampshire is the green-winged teal. These small ducks can be found in wetland environments and shallow ponds. Though a few may remain in the state year-round, these ducks are generally considered to be winter birds. They are typically present here from August until April.

The males have brown heads and gray bodies, and distinctive green stripes across the sides of their heads. The females are brown, with yellow streaks on their tails. Males and females alike have green patches on their wings.

Blue-Winged Teals are other small ducks that aren’t spotted as frequently in New Hampshire but can be spotted here during migration in both the spring and the fall. Fall sightings are a little more common.

These small ducks have blue-gray heads. The plumage across Blue-Winged Teals is a mottled brown. When these birds unfurl their wings, vibrant blue wing patches can be seen, bordered with green and white patches. The males are distinguished by white crescents in front of their eyes.

Though a siting of the Northern Pintail is not all that common in New Hampshire, they can be seen here during the winter, from September to March.

One key distinguishing factor of these winter birds is their long, pointy tails. The males have brown heads, with white stripes down their necks, white bodies, and gray, black, and white patterns on their backs.

In flight, green wing patches can be seen. The females are brown with intricate scaled patterns and brown patches on their wings.

Though again, not particularly common in the state, American wigeons can be spotted here in New Hampshire during the winter months from September to April.

American Wigeons can generally be found in lakes and marshes, as they prefer to be in quieter areas.

These ducks are fairly small, with green stripes on the sides of their heads and grayish-brown plumage elsewhere. The females have grayish-brown heads, and the males have white caps. Both males and females of this species have pale bills.

Gadwalls are dabbling ducks that can be seen migrating across New Hampshire between March and April. So, while not sighted particularly often in the state, they may be seen on occasion.

These large ducks are less colorful than some. They have dark brown heads, black patterns on their chests and shoulders, white or gray on their bellies, and black below. In flight, small white wing patches can be seen.

A diving duck to look out for in New Hampshire in winter is the Bufflehead. This duck can be spotted here between October and April, though some may remain in the area until June.

These ducks take their name from the ancient Greek for ‘bullheaded’ due to the bulbous shape of their crowns. The males are easily recognized by this head shape, and the large white patches behind their eyes, which stands out in contrast to the beautiful glossy green and purple colors on their crowns and necks.

The females also have the bulbous head shape, but otherwise look very different. They have dark brown or black heads and white patches below their eyes. Below, they are grey in hue, and black above.

Ring-necked ducks have been spotted in New Hampshire all year round. However, they are most commonly seen here between March and April, and between October and November, during the periods of migration. Your best chance of spotting them is in the spring.

The male ring-necked ducks are black, white, and gray with cinnamon-hued collars around their necks. The females lack this ring, and are largely brown, with gray and white on their faces.

A few of these ducks may be seen in New Hampshire year-round. However, you are most likely to see these diving ducks here during the winter, between October and April.

Look for the group of hairs on the top of the heads of the male birds to distinguish them from the very similar greater Scaup (below).

Much of the plumage of the males is black with a purplish sheen, and they have white sides, and grayish backs bearing intricate patterns.

The female’s heads are dark brown and they are mostly brown all over with gray sides. They lack the tuft of hair sported by the males, which helps distinguish one from the other.

Like their similar relatives, Greater Scaup ducks can be seen here during the winter, most commonly between mid-October and April.

These birds look, as mentioned, very much like the above. But aside from the hair tuft, the Greater Scaup has rounder heads.

Common merganser ducks can be seen in New Hampshire throughout the whole year. However, they are more frequently spotted between March and April during spring migration.

The hooded merganser is a sea duck that can be seen in New Hampshire year-round. But their numbers swell during the spring and fall migrations and are more frequently sighted during these times and over the winter than they are during the summer months.

This is the only merganser that exclusively resides in North America and is the second smallest merganser species. The males are striking because of their white crests, which they raise and lower from their blackheads. They have golden eyes, black bodies with cinnamon-hued sides, and white chests with white bars upon them. Females also have crests but theirs are red-brown. Otherwise, they have brown gray bodies.

Common goldeneye can be seen in New Hampshire between November and April. These winter birds are spotted fairly often in the state over the coldest months.

These are by no means the only ducks to be seen in the state, and there are plenty more that you may well encounter. But looking for the ducks listed above could be a good place to start!