Woodpeckers In Tennessee: 8 Species To See In The Volunteer State 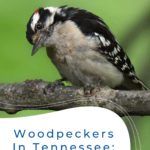 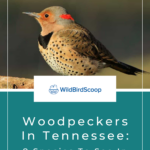 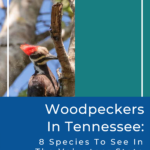 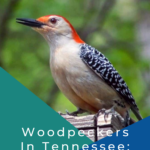 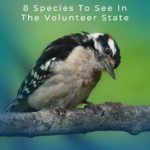 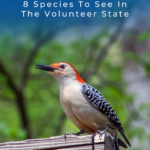 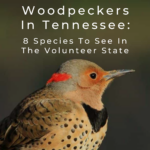 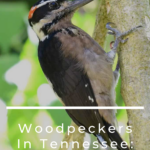 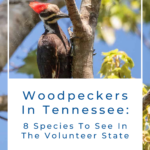 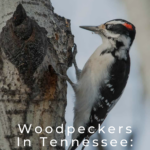 Several rivers, dams, and flood lands abound on the western side of Tennessee with a mountain chain to the east and valleys in between. Around 50 percent of this state is covered with forests, which provides a home to a wide variety of wildlife.

As for the birds, Tennessee’s Watchable Wildlife lists around 100 types of birds that reside in the lush natural spots of the state. You can see amazing birds like the mallard, great blue heron, black vulture, and the bald eagle. There are also the smaller-sized birds that you’d only see in these surroundings like the summer tanager, northern cardinal, and the cedar waxwing.

There aren’t too many woodpeckers in Tennessee, however. Seven can still be spotted, and one hasn’t appeared for quite a while. Read on to know all about these interesting birds.

The red-headed woodpecker is hard to miss with the deep red color on its head, white underbelly, and black back. It also has a big white patch on its wings. This woodpecker is a medium-sized bird, roughly between a tiny robin and a strapping crow.

Red-headed woodpeckers have a voracious appetite for insects, and they hammer the trees looking for a good catch. These woodpeckers can also grab an insect mid-air, or chase one on the floor. If there are no insects around, they’ll gladly eat fruits and seeds.

You can tell that this woodpecker species is around by its raspy shrill calls. You can find this bird wherever there’s a forest or standing timber in wetlands. The red-headed bird is a year-round resident of Tennessee and is usually found in the western portion of the state, especially in the winter.

If you’ve got feeders in your backyard, this bird just might pay you a visit; just be sure it’s filled with suet.

It’s easy to mistake the red-bellied woodpecker for the red-headed species, as red-bellied woodpeckers don’t really have the bright crimson stomachs you’d expect! They just sport a tuft of red feathers on their underbellies. Instead, identify this woodpecker species by a few markers: a red stripe on its head, a pale gray body, and a backside with a black and white checkered pattern.

You can find these birds in the eastern portion of the United States year-round, and though they’re not considered migratory, red-bellied woodpeckers in the northeast might move a bit further south every year when the temperature gets colder. These woodpeckers can be found in most forests in Tennessee, nesting and foraging in decaying trees.

Though they are woodpeckers, this species rarely excavates wood to find insects. Instead, their diet consists of fruit, seeds, small birds, lizards, and frogs. The red-bellied woodpecker will even visit backyard suet feeders.

These woodpeckers are quite noisy and use several calls to communicate with their folks. They start their breeding activities around May, and this is when they get quite vocal.

If you’re relying on a bright yellow belly to identify the yellow-bellied sapsucker, think again. These rather small woodpeckers have black and white bodies and a red forehead, and males sport crimson throats. Their bellies aren’t a stark yellow; instead, they just contain a hint of the color.

The yellow-bellied sapsucker can be seen mostly in the northeastern region of North America, stretching across Canada and the eastern United States. In Tennessee, these woodpeckers are fairly common during the non-breeding season.

These woodpeckers feed primarily on tree sap. So it’s not surprising that they often live in big conifer trees, preferably at high altitudes. They could also take residence in smaller trees if they find a nice hollow. Unfortunately, this species isn’t known to visit backyard bird feeders, however, if you fill one with suet and cross your fingers, you might draw one in.

The little downy woodpecker is one of the most common woodpecker species found in North America, making its home in a wide variety of places, from orchards to suburban backyards, all year-round.

These smallish woodpeckers are slightly larger than a sparrow and never reach the size of a robin. You’ll know the downy woodpecker by its black and white color and black-spotted tail feathers. It’s easy to tell males and females apart, too; males have a red patch on the backs of their heads while females do not.

It might, however, be a bit difficult to distinguish them from hairy woodpeckers, but the downy woodpeckers are smaller with shorter bills.

Though the red-cockaded woodpecker was once a frequent visitor to Tennessee, since landing on the endangered species list in 1970, spotting one in Tennessee is believed to be a near-impossible feat.

These woodpeckers have a rather inconspicuous appearance, with their mostly black and white coloring. The ladder pattern on their backs is shared with several other woodpecker species, but these birds wear distinctive red cockades on their cheeks that set them apart. This red streak is tiny, though, so you’ll need to be up close to see it.

Red-cockaded woodpeckers like to live in groups, where they forage for food and take care of their young in a cooperative manner. Find them in national wildlife refuges, national forests, or other areas where their habitat can be protected.

The hairy woodpecker is quite similar to the downy woodpecker species. Their likenesses go beyond appearance and seep into their living habits. Both take up residence almost anywhere and have a voracious appetite, eating insects, fruits, nuts, and even sap.

Hairy woodpeckers are known to feed on a nasty crop insect, so their presence is welcome in the agricultural parts of Tennessee. These woodpeckers can be found foraging for food on the trunks and large branches of trees in mature forest areas.

When it comes to nesting, the hairy woodpecker is known to remain mated for several years and spends time breeding in the late fall months.

Because the northern flicker is so widespread across the United States, it is no surprise these large woodpeckers are common residents of Tennessee.

Unlike the other woodpeckers that are often found in Tennessee, the northern flicker is brown, not black and white, and has a white rump and yellow-lined wings.

If you find yourself in open woods, it’s not uncommon to spot this species, but don’t look up! You probably won’t find these woodpeckers on tree trunks; the northern flicker prefers to do most of their foraging on the ground instead. These ground-feeders prefer ants over other insects.

These birds have a black body, a red crest, a white stripe across their faces, and a long tapering tail. Both sexes look almost alike, except the male wears a red crown and forehead and sports red feathers in its black mustache.

This large, crow-sized bird favors life in the forests. Mature or decaying trees provide quite the feast for this woodpecker, with their generous supply of wood-boring beetles. When these insects aren’t available, the pileated woodpecker relies on nuts and fruits for food, including poison ivy berries.

Listen carefully, and you might hear these birds drumming on trees, drilling their signature rectangle-shaped holes in the wood.

As you can see, Tennessee is home to more than just the Grand Ole Opry; an abundance of wildlife, including seven species of woodpeckers (eight, if you include our endangered friend, the red-cockaded woodpecker), reside there, too.

This is only the tip of the iceberg, though; there’s a lot more to know about the birds that migrate through Tennessee. It’s quite an attractive place for a variety of our feathered friends.