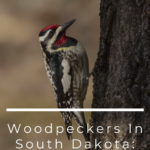 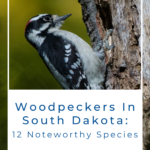 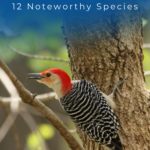 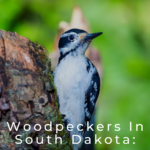 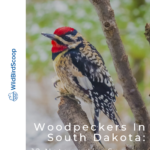 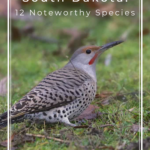 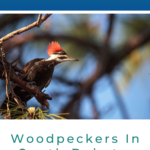 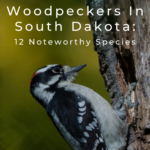 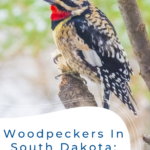 South Dakota is a central part of the Midwest. It has a continental climate with discernable seasons and a grassland biome. Fertile plains cover most of its area till the southwestern borders where the land becomes rugged all the way to Black Elk peak.

The varied geography and abundance of parks and rivers make it home to a wide variety of wildlife, including our winged-friend, the woodpecker! In this article, we’ll explore 12 noteworthy species of woodpeckers common to South Dakota.

Lewis’s woodpecker, named after Meriweather Lewis of the Lewis and Clark duo, is characterized by greenish feathers on its head, and purple plumage on its chest and neck. It’s rather large, so you can easily see it amid the branches.

These birds, typically found in the western United States, are not too sociable, so it could be a bit hard to meet one in urban areas.

This woodpecker feeds on insects in summer when they’re abundant. In winter and fall, it switches to fruits, nuts, and acorns and stores them in crevices for safe-keeping. Unlike other woodpeckers, Lewis’s species rarely dig into wood to find food; instead, it plucks its meals from atop the bark or catches them midair.

When it comes to nesting, these birds are known for using the same spot multiple times. They excavate a cavity in a tree, light pole, or other area scouted out by the male.

The red-headed woodpecker can easily be spotted and identified in the Mount Rushmore State. Nicknamed the “flying checkerboard,” this bird has a white body, black and white wings, a large, crimson head, and a plump white belly.

These sociable birds can be found in healthy numbers in almost every state, and it prefers to spend its breeding season in South Dakota. Unfortunately, this species’ population is declining due to habitat loss.

They prefer being around oaks to feast on the nuts and seeds, but they can also dwell in grasslands, backyards, and woodlands.

These woodpeckers are highly territorial and somewhat aggressive. In fact, this species has been known to use its spike-like bill to pluck other birds’ nests and eggs out of nesting cavities they want to claim.

For a woodpecker, the red-bellied bird is rather large, falling between a hairy woodpecker and the northern flicker on a size scale. It’s common to see them in urban areas, and they take to backyard feeders easily, especially those filled with suet, nuts, or seeds. They’re pretty loud, however, so not all residents will appreciate their presence.

The red-bellied woodpecker’s diet consists mostly of insects it finds on tree trunks and in limbs, but they’re not too picky; they’ll also eat fruits or nuts they’ve hoarded inside tree cracks.

The Williamson’s sapsucker is a rare visitor to South Dakota, but when it does pay a visit to the state, it makes itself at home in the coniferous forests. It spends the summer months in the western United States’ mountains, and when winter rolls around, most go as far south as Mexico.

Males and females of this species look drastically different. The male has a yellow belly and blue velvety feathers on its body that are hard to miss. Females look a bit like flickers, with a brown head, banded head, and black and yellow belly.

This sapsucker likes to nest on conifers or firs, and it can rarely be seen around deciduous trees. As the name implies, their diet mostly consists of tree sap, but they also feed on insects or berries when they are available.

Even though it’s called the yellow-bellied sapsucker, it’s easier to identify these woodpeckers by their bright red heads. Both the male and female are dressed in black and white, topped with crimson, and have a yellow spot on their bellies, but the males can be further distinguished by a red patch of feathers on their throats.

These medium-sized birds are fond of high altitudes and big conifer trees, but if they can’t find these optimal conditions, they choose to reside inside the hollows of small trees. They can be found in South Dakota during migratory months, where they’ll opt for deciduous forests.

Like the other sapsuckers, it feeds primarily on sap, fruits, and nuts, but insects caught mid-air also make up a pretty significant portion of this bird’s diet.

The red-naped sapsuckers have plenty of telling marks. You can identify them by their pointed beaks, red throats and crowns, and the white patterns on their wings.

If you don’t identify these birds by their appearance or the presence of sap wells, they can also be found by their harsh cries or stuttered drumming sounds.

They’re migratory birds, so you might not see them too frequently. They like humans, though, and they can easily take residence around suburban areas, especially those heavily populated with aspen, birch, or pine trees. You can even invite a family of red-naped sapsuckers around your backyard by providing a hollow trunk and some suet.

The American three-toed woodpecker is rather small, with a short bill, and somber coloring. It’s primarily grey, with black and white patterns. The males only have a slight yellow plumage on their crowns.

Watching a three-toed woodpecker might be a rare occurrence in South Dakota. It’s a migratory bird and prefers the woodlands over backyard feeding. But it’s been spotted often enough. Maybe you’ll be lucky enough to see one, too.

This bird resides in areas full of dead or dying large trees, which is why its habitat is constantly changing. And during times when the woodlands are recovering, like after a wildfire, for instance, it’s common to witness a noticeable drop in this woodpecker’s numbers.

The black-backed woodpecker feeds on the insects that feed on damaged trees, like the mountain pine beetles and engraver beetles.

The downy woodpecker is the smallest woodpecker species in North America. These small birds, though noisy, are rather friendly, and don’t mind living around houses and urban areas at all. In fact, if you keep a backyard feeder full of suet, these birds will keep coming back to your yard; you may even develop a friendship with one or two of them!

Downies also inhabit weedy edges, orchards, brushes, or parks, but their favorite spot is around deciduous trees. It’s common to find these woodpeckers chowing down on insects, seeds, and berries.

Downy woodpeckers have distinct black and white patterns on their wings with a striated black and white crown. Females look very similar to males, except they have no red feathers. Their look is finished off by a red plume, making them look rather adorable and picture-perfect!

Hairy woodpeckers are close cousins of downy woodpeckers — so close that if you’re not paying close attention, you’ll probably mistake one for the other! They are very similar in appearance and share the propensity to taking habitat anywhere. However, you can tell the two apart by the spots on the downy’s tail and the long bill of the hairy woodpecker.

These woodpeckers aren’t picky eaters, as they feed on fruits, nuts, insects, and tree sap. They’re also the main predator of a type of moth that damages crops severely — the European corn borer — so these birds are likely a farmer’s best friend.

Hairy woodpeckers spend their time latched to tree trunks, around tree bases, and even on the ground, as they forage for food. They nest in cavities they dig into trees and are generally permanent residents of South Dakota.

The northern flicker is hard to miss, with its spotted underbelly and sides, in addition to the golden yellow of its wings and tail. It’s a relatively large bird that enjoys a migratory routine and an extravagant lifestyle.

There are about ten known species of the northern flicker and a southern flicker that shares most of its traits except for being migratory. Flickers are unique among woodpeckers in their tendency to feed on the ground. They especially fancy ants and use their formic acid in preening.

These birds can be seen all across North America throughout the year, but if you want to see these woodpeckers in South Dakota, you can find them breeding during the summer months.

The pileated woodpecker has a red crest, striped head, and predominantly black body. It’s a large plump bird — the largest in North America, actually — with a long pointed bill. If this bird looks familiar to you, that’s no surprise; this species is the inspiration for the famed cartoon character, Woody Woodpecker.

This bird prefers a mixed or deciduous forest, but can also be found among coniferous trees. The pileated woodpeckers feast on insects, especially wood-boring beetles and carpenter ants. They also eat fruits, nuts, and poison ivy berries.

You’ll know these birds are around if you spot rectangular-shaped holes in trees and hear loud, whinnying caws in the distance.

There you have it, a roundup of all the woodpecker species you can spot in South Dakota! If seeing one of them out in its natural habitat isn’t enough, you can invite a few of them to your backyard feeder. And if that’s the case, check out our article on why feeding wild birds in the spring important.