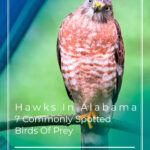 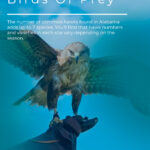 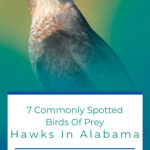 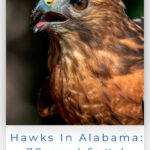 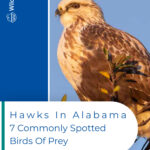 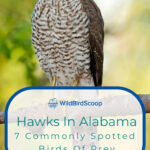 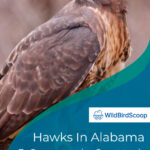 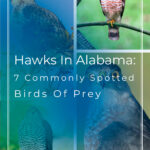 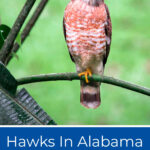 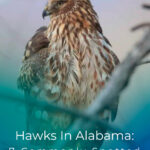 Since Alabama is a haven to hundreds of bird species, the state can be considered a birdwatcher’s heaven. Plenty of winged creatures are commonly spotted in the Heart of Dixie, and birds of prey are no exception; certain raptors, including hawks, can often be found in the state.

Hawks are members of the Accipitridae family. They roam open lands around the state, from forests and wetlands to mountains, searching for small mammals to make their next meal.

To this day, the number of common hawks found in Alabama adds up to 7 species. You’ll find that hawk numbers and varieties in each site vary depending on the season.

Pack your best pair of binoculars, and get ready for a thorough birdwatching experience as we walk you through the most commonly sighted hawks in this state.

Hawks fall into one of two categories of birds: accipiters or buteos.

Accipiters are small birds with broad wings, and a flight style in which they flap their wings rapidly then glide in the air. This is the largest bird of prey genus, with about 50 species falling into the category.

The buteo genus, however, consists of hawks and buzzards, and they soar through the sky by flapping their wings vigorously in a spaced manner. There are about six species of these birds that call North America home.

Sharp-shinned hawks are among the smallest variety of raptors. Though it’s small for a hawk, it’s medium-sized in comparison to other birds. You’ll know them by their long, square-ended tails with rounded bodies, and notice the bluish-gray plumage that coats their backs and heads and the light sunset orange bands on their breasts.

If size and appearance aren’t quite enough to help you identify this bird, use their shrill calls as a calling card as well.

As you’d expect from a bird of prey, sharp-shinned hawks prey on other birds and small mammals. They hunt by flying close to the ground with swift, short flaps of their wings and prefer to spend their time in woodlands with coniferous trees where they can feed on songbirds.

Because there are very slight differences between the two, Cooper’s hawks are commonly mistaken for the aforementioned species. You can use Cooper’s longer and more rounded tail, straight wings, and bigger head to differentiate between them, however.

Named after ornithologist James C. Cooper, these birds hunt stealthily by flying with spaced flaps of their wings, tending to surprise their prey from behind thick foliage. Their diet is mainly birds like flickers and small mammals like mice.

They can be found perched low in forests, feeding on songbirds, so if you have a feeder in your backyard and one of these birds is around, you might want to take it down until this bird of prey finds a new hunting ground. Unlike most hawks found in Alabama, these are permanent inhabitants of the state.

The medium-sized red-shouldered hawk can be spotted nearby water bodies, like swamps and rivers. You’re bound to have good luck searching for these birds, as they’re year-round residents of Alabama, and you’ll recognize them easily when you listen for their distinguishable call.

If you can’t hear them, look for the bird with red-brown feathers on its shoulders and breasts and checkered ones on its back.

The red-tailed hawk soars high by vigorously flapping its broad wings, and when it’s in flight, the bird’s figure looks like the tail is fanned open and the wings are bent slightly inward toward its upper body.

If you find yourself in Alabama in the fall, keep your eye out for the spectacle broad-winged hawks create when they begin to migrate in large flocks called kettles. Unlike red-shouldered hawks who stick around all year long, the broad-winged bird can only be found in the United States during the summer season and heads south to enjoy a Central American winter.

Broad-winged hawks are the smallest among buteo birds. Their flight is often high, and they dive down to the ground in common hawk fashion to snatch up their prey.

These raptors sport red-brown heads and their chests have barring that’s the same color.

Since red-tailed hawks are one of the most commonly found and largest hawks in North America, there’s a high probability that the first hawk you’d stumble upon is of this species. You’ve most likely heard it, too. Ever heard a hawk or an eagle’s cry on TV? This is the famous cry of the red-tailed hawk.

Look for this bird circling over fields, waiting to clock a rat or a rabbit to swoop down and eat. These large raptors have coffee-brown plumage with a distinct brown-red tail. You can mostly find these hawks hovering above open fields.

When it’s time to mate, males of this species like to put on a show, diving up and down at steep angles. Sometimes, they’ll even grab onto females and spiral toward the ground together.

To spot a rough-legged hawk in Alabama, you’ll need to be around during the winter months and to have a bit of luck on your side. They spend the rest of the year in colder Arctic regions.

To survive the cold, these birds have feathers that cover their legs, going all the way down to their feet, hence the species’ name. Only two other American raptors share this trait with the rough-legged hawk: ferruginous hawks and golden eagles.

This bird is the only member of the harrier family to reside in North America, and you can find it near marshes and fields.

Males are gray and white with dark wingtips and black banded tails, while females and young northern harriers are brown with black stripes on their tails.

A Recap of Hawks in Alabama

Alabama is home to birds of all kinds, and birds of prey are no exception. Look for hawks, falcons, osprey, and more among Alabama’s wildlife.

Sport on your binoculars and watch like a hawk for these exquisite creatures! Bear in mind that not every hawk species found in Alabama is a permanent resident; this state welcomes migratory hawk guests as well, so what you see is determined by the time of year you’re in the state. You can also read about woodpeckers in Alabama to make the best out of your upcoming bird watching experience.