Hawks In Alaska: 6 Species To See While Exploring The Wilderness 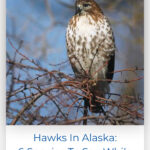 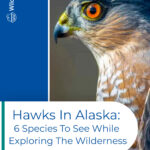 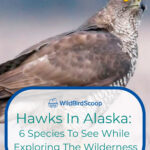 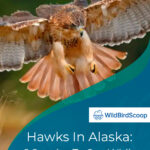 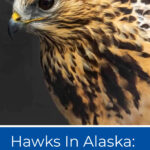 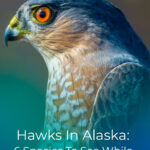 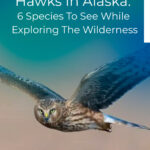 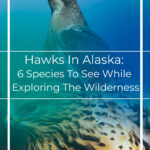 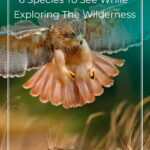 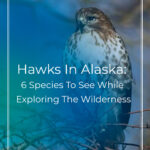 When planning your next vacation, Alaska probably doesn’t make it into your list of top destinations. But if you’re someone who enjoys exploring the wilderness, Alaska will definitely be your best bet!

In this article, we’ll detail all hawks found in Alaska. You’ll know how to find and identify each species by learning things like their behavior, habitat, range, and so forth. Without any further ado, let’s dive right in!

Northern goshawks are among the fiercest hawks in the United States. Their short, broad wings and rudder-like tails grant them excellent aerial agility, allowing them to swiftly hunt other birds, especially Gray Jays and crows. Experienced falconers commonly call them cook’s hawks because they can be quite helpful in catching edible prey.

Young goshawks have brown upperparts and streaked underside, while adults have greyish plumage. If you get close enough, you’ll notice intimidating red eyes in adults and regular yellowish ones in younger hawks. Their heads are predominantly black, except for a white eyebrow stripe.

Although these hawks are the only year-round hawk residents in Alaska, spotting them is fairly challenging because they prefer nesting in dense, secluded coniferous forests. If you successfully find a kettle, we strongly recommend keeping your distance; these hawks won’t hesitate to attack if you get too close.

Rough-legged hawks are the only species that venture into the Arctic Circle during the spring. Since the Arctic’s sun remains visible 24/7, these hawks can enjoy excellent feeding and mating chances.

But what about the frigid temperatures, you might ask? Luckily, these hawks seem to have dotted their i’s and crossed the t’s! The thick feathers that span over their legs ensure that they stay warm as they hover around, which is the reason why they’re called “rough-legged.” This is one of only three American raptors who share this physical characteristic, including the golden eagle and ferruginous hawk.

Like most hawks, those of the rough-legged species have various color phases. Most hawks have dark-brown upperparts and pale, streaked underside. As they hover close to the ground, you can easily identify them by the broad white patch at the base of the tail.

If you don’t want to venture into the Arctic, you can still spot these hawks in Alaska’s southern portions during winter. They tend to perch on fence posts and utility poles to search for prey with their sharp sight.

Red-tailed hawks are the most common species in North America. They reside in almost all of the American states throughout the year, but they visit Alaska only in the spring to mate.

As the name suggests, these hawks are well-known for having a reddish-orange tail that gradually darkens as they get older. The rest of the plumage is quite dissonant between subspecies, but most hawks have chocolate-brown upperparts with a light streaked belly.

The best thing about these hawks is that you don’t need advanced birdwatching skills to find them. On your next road trip, pay close attention to the roadside trees, fence posts, and telephone poles, especially the ones overlooking open fields. A red-tailed hawk will perch there for hours until they spot a suitable prey.

Although sharp-shinned hawks are the smallest species in the U.S., they’re among the most ruthless hunters. They’re commonly known among locals because they often ambush the birds visiting the backyard feeders by bursting from nearby bushes.

Immature Sharpies have brown upperparts with a light underside that shows vertical streaks. As they proceed into adulthood, the streaks become more horizontal, and the upperparts turn bluish-gray. The eyes also mature from light yellow to deep red, just like the northern goshawk.

When hovering over open areas, you can easily identify sharpies by their square-shaped tails. As they perch atop trees, you should be able to see their thin legs and small feet, which is the reason behind their name.

Just like the red-tailed hawks, the sharp-shinned species migrate to Alaska during the spring to have a better mating chance. However, you’ll have to invest more time and effort to spot them because they like to nest inside thick coniferous forests.

Swainson’s hawks were named after William John Swainson, a famous British ornithologist who lived in the 18th century. They’re commonly known as grasshopper or locust hawks, in reference to their insectivorous nature.

Just like the previous species, these hawks can be seen in Alaska during the spring, but they don’t venture as deeply. You can mostly find them in the open grasslands of the eastern regions of the state. Unlike other raptors, these species tend to chase grasshoppers on the ground. Nevertheless, they can still catch prey midair.

The adult Swainson’s hawk has dark-brown upperparts, brown breasts, and a pale belly. If you get close enough, you should be able to spot the distinctive white patches on its throat. Differentiate between males and females of this species by noting the colors of their heads; while males have mostly grey heads, females’ are slightly darker.

While other continents boast several species of harriers, North America only has one: the northern harrier. Find these hawks in Alaska during breeding season in open marshes, grasslands, and tundras. But as you trek across these areas, be sure to watch your step carefully, as these birds like to make their nests on the ground.

Though they’re unrelated, northern harriers are quite similar to owls. They hunt like them, relying not only on their vision but also their hearing to track down and capture their prey. The similarities between the two birds go beyond behavior, though. Not only do they hunt like owls, but they look like them as well, sporting a disc-shaped face and stiff facial feathers.

Males of this species are gray and white with black wingtips, and females are brown with black bands on their tails. Spot these medium-sized birds by their sharp, hooked bills and V-shaped wingspan as they soar through the air.

As you trek around the mesmerizing wilderness of Alaska, you’re almost guaranteed to spot a few red-tailed hawks, especially on roadside trees and telephone poles. Swainson’s hawks are also common, but you’ll have to be more observant to spot them since they primarily spend their time feeding on the ground. Rough-legged hawks are the only species that proceed well into northern Alaska, but you can also spot them in the south during the migration season.

If you really want to put your birdwatching skills to test, look for northern goshawks and sharp-shinned hawks. These species prefer to stay hidden inside dense forests, and they tend to be quite aggressive toward intruders. And, last but not least, watch your step as you wander across Alaska’s open spaces; you don’t want to accidentally step on a northern harrier’s nest.

Should you find yourself in the 49th state, try to spot each of these birds of prey.