Hawks In Arkansas: 9 Species Found In The Wonder State 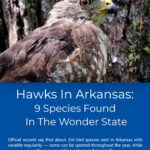 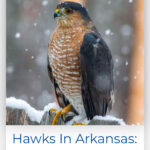 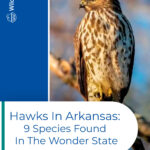 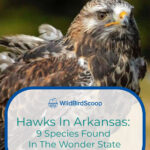 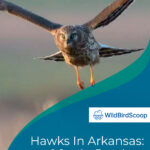 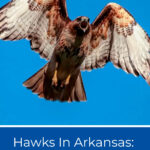 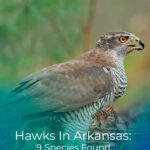 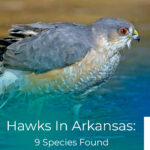 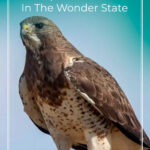 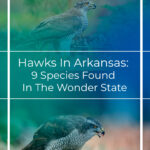 In the 1920s, Governor Charles H. Brough gave Arkansas its first official nickname — the “Wonder State.” And if you ever find yourself in Arkansas, a simple walk in its mesmerizing natural parks will explain why Brough came up with that peculiar name!

Official records say that about 350 bird species nest in Arkansas with variable regularity — some can be spotted throughout the year, while others come visiting only in certain months. Among those 350 species, there are nine hawk breeds that birdwatchers like to trace each year.

In this article, we’ll give a detailed profile of all hawks in Arkansas. You’ll know all about their range, behavior, diet, visual description, and more!

You might not realize it, but we’re pretty sure you’ve seen a red-tailed hawk at least once in your life. How can we be so sure? Because they’re the most common hawks in North America.

Their excellent adaptation skills allow them to nest in various habitats all around Arkansas. However, they usually like open fields and grasslands that have dispersed trees and telephone poles. Perching on these high areas allows the red-tailed hawks to have the advantage over their vulnerable prey, which includes mice, squirrels, rabbits, amphibians like frogs and toads, and reptiles.

Unfortunately, red-tailed hawks have a strikingly variable plumage. In Arkansas, most hawks have dark-brown upperparts and a white belly, but as you move west, you might catch a glimpse of an almost white subspecies.

To avoid confusion, you can always identify these hawks with their cinnamon-red tails, which is the reason behind their name.

Cooper’s hawks reside in Arkansas throughout the year, nesting around the edges of forests and open fields. But in recent years, these birds of prey have become more common in suburban areas.

These hawks often camp in neighborhood trees and shrubs, waiting to ambush the unsuspecting birds that stop by backyard bird feeders.

They use their long rudder-like tails to perform skillful air maneuvers, making it impossible for blackbirds, songbirds, starlings, and doves to escape their claws. That ruthless hunting behavior is the reason why some people call them big blue darters and chicken hawks.

To identify these hawks, look for their blue-grey wings, rufous barred chest, and white belly. Adults have dark crowns and white napes, making them look like they’re wearing a beret.

Generally speaking, most hawks screech for a specific purpose — be it mating, defending the nest, or declaring their territory. Red-shouldered hawks, on the other hand, seem to genuinely like the sound of their voices. They’re so noisy that you’ll probably hear their calls before you see them.

The red-shouldered hawks can be spotted in Arkansas throughout the year. They particularly prefer forests that have large, open swamps. They also don’t mind staying in nearby suburban areas where they can hunt small mammals, like rodents or a squirrel or two.

As the name suggests, these hawks are known for the red patches spanning over the top edge of their black-and-white checkered wings. But of course, it’s quite challenging to observe that feather pattern midair. Alternatively, you can identify them by the pale crescents present near their wingtips.

If you’re into hawk-watching, you’ve likely heard about broad-winged hawks before. They nest in most of the eastern United States, including Arkansas, during spring and summer. Beginning in September, they start migrating to South America in huge flocks, making for absolutely stunning sceneries.

Unfortunately, if it’s not the time for migration, you might not be able to spot these hawks. They’re secretive birds who like to nest inside dense woodlands, away from curious people.

The most common morph of broad-winged hawks has reddish-brown upperparts, barred underside, and banded tail. As you head toward the west, you might spot the rare dark subspecies, which sports a completely black, crow-like appearance.

If you have an eye for detail, you’ll notice that their wings are relatively wider than their short, stocky bodies. That said, it’s pretty hard to observe this midair.

Most species of hawks feed on small mammals, reptiles, or even other birds. Swainson’s hawk, on the other hand, decided to break new ground by chasing large insects like grasshoppers and caterpillars. That’s why it’s common to see them foraging atop large fields and grasslands.

In Arkansas, these hawks spend the summer in the western regions before migrating to South America in the winter.

Adults have gray upperparts, brown chest, and white bellies. As these hawks soar through the sky, you can easily identify them by their unique underwing pattern — white on the front and black on the back.

Rare, dark morphs, however, can be seen in far western regions. These breeds have dark brown plumage with faint rufous tones toward the belly.

At first glance, a novice birdwatcher might mistake a sharp-shinned hawk for Cooper’s bird. And to be honest, we can totally see where the confusion might come from. These breeds share the same brown-white plumage, bird-centered diet, and stealth-themed behavior.

The most reliable difference between the two is the size — sharp-shinned hawks can be about six inches shorter than Cooper’s hawk. If you get close enough, you should also notice the sharpies’ tall and thin legs, which inspired their unique name.

After breeding in Canada during the summer, these hawks head off to Arkansas starting from September. You’ll need to search high and low inside dense coniferous forestlands to find a sharp-shinned bird’s nest, though.

Generally speaking, owls and hawks are so different that even beginners can tell them apart. However, northern harriers are the species that blur that line. They have flat faces with prominent eyebrows and small bills that look incredibly similar to those of owls.

It’s common to spot these hawks hovering at low altitudes because they locate and catch their prey with sound rather than sight. This raptor starts appearing in Arkansas during the winter after a long migration journey from the Arctic.

When perched on a tree, you can easily identify the northern harriers by their distinctive white rumps. You can also depend on the dark trailing edges present on the wings.

Northern goshawks are the distant cousins of the Cooper’s and sharp-shinned hawks, but birds of this species are a lot fiercer.

After spending the summer mating in Canada, these hawks arrive in Arkansas around late September. Sadly, it won’t be easy to spot them since they like to nest inside thick coniferous forests. And even if you actually bump into one, it’ll probably dart away before you can identify it, courtesy of its long rudder-like tail.

Adult northern goshawks have gray upperparts, blue-and-white barred underside, and reddish eyes. You should also see a white stripe spanning above the eye and over the beak, making these hawks look like scarred hitmen.

As ruthless hunters, the northern goshawk’s main victims are other birds. But if they can’t find birds, they’ll chase snakes, small mammals, and even insects. What a resourceful breed!

The last breed on our list spends the summer mating over the cool arctic tundra. When the weather becomes unbearably frigid, they start migrating south to reach Arkansas by early October.

Thanks to their unique appearance, you can’t mix up these hawks with any other breed. If you look at their legs, you’ll see thick feathers extending to the toes, which is crucial for surviving the cold north.

While flying, you can identify these hawks by the black spots present at the bend of the wings. You should also see a dark patch spanning across a light belly. The rest of the plumage shows a bold, black-and-white pattern.

With its wide variety of feathered friends, including the nine hawk species mentioned above, residing in its gorgeous woodlands, Arkansas truly deserves to be called the Wonder State!

Red-tailed and red-shouldered hawks are the only breeds that you can see everywhere around Arkansas throughout the year. Cooper’s hawk is also a permanent resident, but their secretive behavior makes them hard to spot.

In spring, you should look for Swainson’s and broad-winged hawks. The latter breed is more beginner-friendly since it tends to hover over open grasslands. On the contrary, the former likes to live inside forests and woods. Last but not least, northern harriers, northern goshawks, sharp-shinned hawks, and rough-legged hawks will drop by Arkansas in the winter, so if you find yourself there in the colder months, keep your eyes peeled for these birds of prey.