Hawks In California: 9 Popular Species To Search For 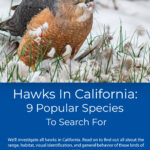 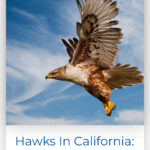 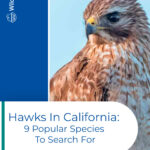 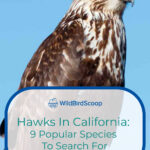 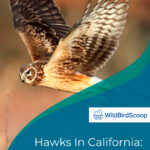 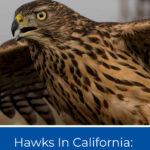 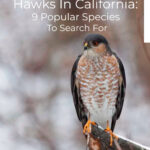 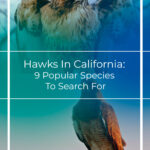 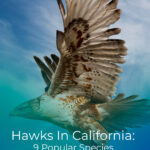 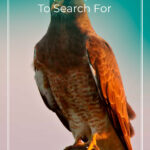 The glamorous Hollywood, the fascinating Disneyland, the marvelous Golden Gate Bridge — these are some of the things that pop into mind whenever anyone mentions California.

But lucky for us, California also houses prosperous nature and wildlife. The most recent records say that you can spot up to 676 bird species there, which easily surpasses any other state.

Today, we’ll investigate all hawks in California. Read on to find out all about the range, habitat, visual identification, and general behavior of these birds of prey.

Red-tailed hawks are year-round residents throughout the United States and most parts of Canada. You can often spot them perched on roadside trees, traffic lights, and poles, especially ones surrounded by open fields.

As the name implies, the most characteristic feature of these hawks is their red tails. However, the rest of the plumage might be quite variable between subspecies. In California, most red-tailed hawks have rich-brown upperparts and pale white underparts. As you head toward the east, however, you might spot hawks with darker upperparts and a streaked belly.

This medium-sized raptor’s diet mostly consists of small mammals, but it will also feed on birds, reptiles, fish, and insects.

Cooper’s hawks were named after William Cooper, one of the most renowned ornithologists of the 19th century. But among avid birdwatchers, these hawks are commonly known as big blue darters and hen hawks. These names describe their excellent ability to hunt other birds, such as robins, jays, flickers, and more. You can also spot them making meals of small mammals like chipmunks, squirrels, mice, and bats.

When it’s time for these birds to nest, males build a nest in tree limbs in heavily wooded areas, often on top of an old, no longer used nest, and females lay eggs that incubate for about 5 weeks. Both sexes care for young eyes until they become independent after about eight weeks.

Red-shouldered hawks are predominantly present throughout the eastern states. However, they also prefer the open habitats of California, especially those toward the west. Look around oak woodlands next to swamps and rivers to maximize your chances of seeing one.

To identify these hawks, look for their dark-and-white checkered wings, reddish barred underparts, and strongly banded tail. If you’re lucky enough to spot one while wheeling over a prey, you can easily identify it with the translucent crescents surrounding the wingtips.

You can find Swainson’s hawks in the open grasslands and prairies of California throughout the summer. Although they usually nest in secluded trees and shrubs, they can also live on cliffs or steep slopes where they have a clear vantage point of their prey. Unfortunately, spotting them in winter is quite challenging since they tend to migrate to South America.

Despite having hefty physiques, these hawks don’t typically feed on mammals or other birds. They prefer to chase large insects like caterpillars and grasshoppers, which is why you’ll probably spot them foraging on the ground.

These birds, named for William Swainson, were initially confused for common buzzards until a French biologist, Charles Lucien Bonaparte, identified them as a species of their own. They feed on rodents, rabbits, and reptiles, but when their breeding season ends, the diet of Swainson’s hawks is almost entirely insects.

Rough-legged hawks are the only buteo species that can survive in the frigid climate of the Arctic, thanks to the lush feathers that run down the legs to their toes. This valuable evolutionary trait gives these birds their names, and only the rough-legged hawk, ferruginous hawk, and golden eagle boast this physical characteristic.

After breeding in freezing arctic areas in the spring, these hawks migrate south into Canada and the central and western United States. In California, they’re often spotted atop high cliffs, steep slopes, tall trees, large rocks, and narrow ledges.

With a maximum length of 27 inches, the ferruginous species are the largest hawks in North America. Like the rough-legged hawk species mentioned above, ferruginous hawks have feathers that go all the way to their toes. Despite having feathered legs, however, these hawks don’t like cold climates.

If you want to spot a ferruginous hawk in California, search around the open grasslands, prairie, sagebrush steppe, and pinyon-juniper woodlands. As the spring approaches, their Californian population dwindles as they migrate north to breed.

As they soar up, these hawks raise their wings to assume a pretty stunning V-shape, making their identification a bit easier.

If you’re just beginning to make your way into the vast world of birdwatching, identifying northern harriers may give you a bit of trouble. Thanks to their flat faces and small bills, these hawks are often mistaken for owls. Experts also believe that they rely on sound more than sight while hunting, which is another feature typical of owls. Despite similarities, however, these species of birds have no relation to one another.

Thanks to their rudder-like tails, northern goshawks are notorious for their superior aerial agility — a feature that allows for hunting other birds like blue jays, gray jays, Steller’s jays, and crows.

Although they’re year-round residents in California, you’ll probably need to burn the candle at both ends to successfully spot them since they typically nest inside dense, secluded forests. Once you actually see them, you’ll need to tread cautiously because these hawks are well known for fiercely defending their nest.

With a maximum length of 13 inches, sharp-shinned hawks are the smallest species in the United States and Canada. But make no mistake; that small size doesn’t impact their hunting efficiency. These hawks can dash at an incredible speed to catch songbirds and small rodents like mice.

These hawks reside permanently in California’s northern grasslands, but you can still spot them in the south during the fall migration.

Between the nine hawk species found in California, red-tailed and Cooper’s hawks are the easiest to find because they’re year-round residents. Red-shouldered hawks are also permanent residents, yet they mainly nest in western lands. If you’re visiting California in the winter, you might be able to spot the Rough-legged, Ferruginous, and the Swainson’s Hawks, in addition to the Northern Harriers.

Northern goshawks and the sharp-shinned hawks can be spotted throughout the year in the northern sections of California. However, their skillful hunting and elusive behavior will require an experienced birdwatcher, so if you’re newly interested in observing birds, don’t get discouraged if you don’t see one of these birds right away.