Hawks In Colorado: 9 Birds Of Prey Species To Behold 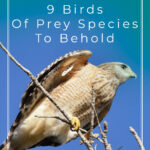 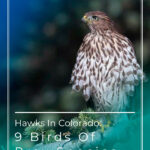 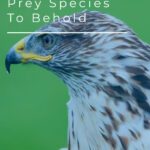 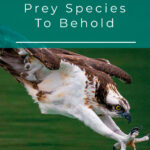 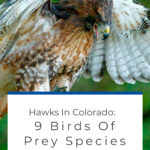 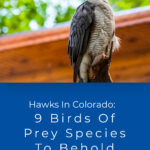 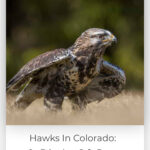 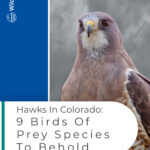 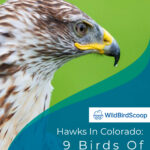 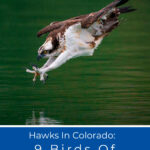 It’s always a pleasure to witness birds of prey, especially hawks. And if you happen to live in Colorado, you’re in luck because nine types of hawks of the 25 present in the United States live there.

The most remarkable thing about hawks in Colorado is their diversity. They come in a wide variety of shapes and sizes, eat different foods, and live in varying habitats. Are you ready to learn more?

The smallest in Colorado, the sharp-shinned hawk can be found mostly around forested areas. Plus, it frequents bird feeders, so you might find one in your backyard.

Because this hawk is athletic, it may be hard to identify while it’s flying at high speed. Still, the appearance of the sharp-shinned Hawk is pretty notable. Look for bars of orange on the bird’s upper chest and blue-gray wings and back. When this hawk is in flight, its wings are usually short and rounded, and it has a long tail.

Sharp-shinned hawks feed on smaller songbirds. They often ambush birds by waiting patiently for their prey, then bolt at high speed to ensnare them.

Just like we’ve mentioned earlier, Cooper’s hawks are pretty identical to sharp-shinned hawks. They have the same coloring of chest, head, and wings, so it can be impossible to tell them apart in flight.

In Colorado, you’ll often see Cooper’s hawks near woods or on the edge of fields. These raptors prey on songbirds, so you might find one of these hawks close by if you have bird feeders in your yard.

However, most people aren’t fans of watching Cooper’s hawk capture smaller birds, like mourning doves and European starlings, near their houses. If you feel the same way about this, you can take down your feeders so that songbirds will stay away and predators won’t come near where you live.

The third type of hawk you may be fortunate enough to witness in Colorado is the red-tailed hawk. It’s one of the largest hawks you could come across, and it’s quite easy to identify due to its unique coloring.

Red-tailed hawks are known for their characteristically red tails. Yet, their plumage can range from white to black, so you can’t exactly rely on its color for identification.

The best thing about the red-tailed hawk is that it adapts pretty quickly to its surroundings. As a result, you’ll find it at various places including the countryside, parks, woodlands, fields, and more. You might just see one in your backyard!

What’s interesting about these birds is that they mostly feed on mammals, not other birds. Red-tailed hawks will eat mice, rats, rabbits, and squirrels, and they’re also fans of snakes, carrion, or even larger birds like pheasants and starlings.

Now, here’s a hawk that’s a bit more challenging to find in Colorado. The northern goshawk prefers to stay deep inside forests and away from humans, so it won’t appear in your yard to bother other birds.

Still, this hawk is hard to mistake due to its distinctive appearance. Its upper body is usually of blue-gray or brown coloring, while its underbody can be bluish-white or light gray with barring. Its most remarkable feature, however, is its deep red eyes.

Unlike other hawks on this list, a northern goshawk’s diet consists of a wider variety of foods. This bird preys on mammals, insects, birds, and reptiles.

Just be careful if you come across a northern goshawk’s nest when hiking in the woods. This hawk is highly protective of its home and might even attack you if you get too close.

Swainson’s hawks arrive in Colorado each April to breed and raise their offspring. When it’s the beginning of September, these birds begin to migrate to Argentina, which takes about two months. Pretty impressive, right?

When in Colorado, you can often see a Swainson’s hawk perched on fence posts or trees, or you might witness one of them just soaring overhead.

These hawks come in two colors. One type of Swainson’s hawk has a cream-colored chest with a white throat patch and a reddish band around its upper breast. The other type has darker coloring, which is typically chocolate brown except for a lighter-colored band on its tail.

This hawk’s diet mainly consists of insects such as beetles, grasshoppers, and locusts.

Rough-legged hawks only visit Colorado in winter as they’re migrating south from the Arctic tundra. If you want to witness one of them, look in open areas where they showcase their unique hunting style for everyone to see.

These raptors hover in place looking for food, and they tend to face the wind while doing so. Not many birds of prey follow this remarkable hunting technique. Rough-legged hawks eat rodents like mice and shrews, but that’s only when they’re heading south. While staying in the Arctic tundra, these birds feed on lemmings instead.

A rough-legged hawk has feathers all over its body, unlike most hawks. This helps it keep its body warm in cold temperatures.

The ferruginous hawk is one of the largest hawk species in North America. This beautiful creature is best known for its broad wings and wide tail. Its tail is sometimes rust-colored, gray, or white.

Ferruginous hawks live in the open areas of Colorado, and you can observe them in two color forms: light morph and dark morph. In the case of light morph birds, you’ll notice that they have rusty brown backs and lighter underparts. On the other hand, dark morph birds are dark-brown on their chest, back, and belly. These birds are rarer to witness than their lighter counterparts.

The diet of a ferruginous hawk is a bit limited compared to other hawks. It mainly feeds on small mammals, and it follows an interesting hunting style of hopping on the ground after its prey.

Broad-winged hawks spend their summers in the United States and Canada, and they spend each winter in Central America and South America. In Colorado, you might see them as they migrate across the eastern half of the state.

Known for their short and stocky bodies, broad-winged hawks adapt pretty easily in forests. They perch on the high branches of trees and wait for their prey. When their victim comes into sight, these hawks swoop down to catch a frog or a small mammal. It’s rare, however, for these hawks to hunt while flying.

We realize that ospreys aren’t classified as hawks, but they aren’t eagles either. Instead, they have their own family (Pandionidae) and genus (Pandion). Still, these birds of prey look so much like hawks that they’ve been nicknamed sea hawks, fish hawks, and river hawks.

Ospreys are pretty common in Colorado, and they usually live near bodies of water because their diet mainly consists of fish. Even their bodies are perfectly engineered to aid them while they hunt for fish.

For instance, ospreys have curved talons that intersect when closed, which keeps the fish from slipping away. Also, these fierce birds of prey have strong bodies that plunge into the water hard enough to capture their prey efficiently.

Therefore, if you wish to witness an osprey in action, head for your nearest large body of water.

To Wrap It Up

It’s amazing how many hawks in Colorado you can see if you know where to look. More interestingly, each type of hawk has its own unique appearance, hunting style, and eating habits.

Hopefully, after reading our guide, you should be able to identify most, if not all, eight species of hawks in Colorado. Plus, it’s always exciting to watch an osprey as it gloriously catches a fish in its powerful talons.

If you’re intrigued by wild birds in this state, you may want to learn more about woodpeckers in Colorado, too.