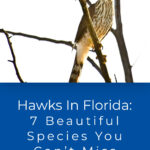 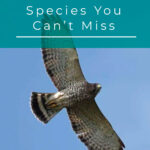 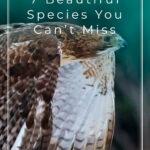 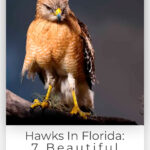 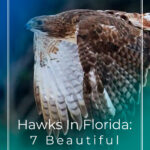 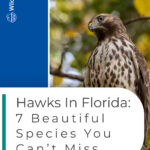 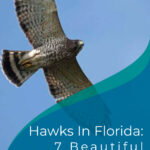 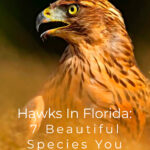 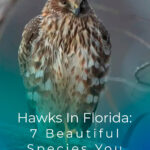 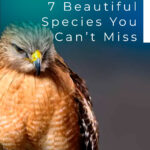 Florida isn’t just a pretty place to go swimming. Even though it has the longest coastline in the United States, it has much more to offer than just the water. With a total of 37 forests, 175 parks, and 12 national parks, Florida is a perfect attraction point for rare birds and birds of prey, like hawks.

Out of the 25 hawk species in the United States, Florida alone has seven of them. It’s only normal, seeing as the state’s Everglades Park alone hugs around 1.5 million acres of marshes and forests. No wonder it’s considered the largest non-tropical wilderness in the country!

Here we’ll review the seven species of hawks in Florida, so you can identify them easily the next time you’re there!

Red-shouldered hawks stay all through the year in Florida. You may also find some of them in the United States’ eastern states. They’re well-known for their love of forests and wooded areas. That’s where you’ll most likely find them, or if you’re lucky enough, their nests.

As a result of the clearing of these wooded areas in a lot of states, the red-shouldered hawk was prone to endangerment. However, its population has been increasing over the last 50 years to eliminate this threat.

These hawks feed on a lot of things, including amphibians, small mammals, reptiles, and birds. That’s why they spend most of their time hunting in wet forests and circling over their nests.

You can easily identify a red-shouldered hawk by its whistle, but some physical traits may help you as well. You’ll find a pale crescent close to the tips of its wings; it’ll appear more vividly under direct sunlight. Additionally, these hawks have distinctive red underparts.

The short-tailed hawk is the least common species you’ll come across in Florida. It’s said that there are only 500 individuals of the rare bird in the state. Meanwhile, the numbers are on the rise in Mexico and the southwestern USA.

Not a lot of information is available about short-tailed hawks on the internet, but we gathered the best we could.

The bird rarely perches on trees to look for prey. It does so while soaring high up in the sky. If you saw one while flying, you may think it’s standing in a motionless stance in the middle of the sky. Meanwhile, it’s actually flying and gliding through the wind. But short-tailed hawks fly too slowly, which may be the reason for the weird stance.

Short-tailed hawks mostly feed on small birds, and they may feed on their fellow sharp-shinned hawks, thanks to their small size. They also eat lizards, rodents, frogs, and insects.

In the spring, the male short-tailed hawks appear over the nesting territory, displaying a show of acrobatics and swooping around, probably to attract a mate for breeding.

The sharp-shinned hawk is one of the smallest species of hawks in the world, and it’s the smallest breed in the United States. In addition to that, it’s one of the most common species to find in your backyard. While that may be a good thing for a bird watcher, it may mean bad news for birds that pay you a visit.

Sharp-shinned hawks feed on small birds. If you have a feeder in your backyard, there’s a high chance a couple of birds will fall victims to the prey hawk. That’s why you should put your feeder away for a couple of weeks if you spot a sharp-shinned hawk near it.

Sharp-shinned hawks are considered tiny; that’s why their bodies don’t appear clear when they’re flying. You’ll only see a blurry bunch of feathers, but you can easily identify it because of its exceptionally small size and long legs. Plus, these hawks have very tall tails, contrary to their compact bodies.

The time where you’ll find the most sharp-shinned hawks is during their migration. These champions migrate in the fall.

The red-tailed hawk is the most common species in North America. It makes Florida home all year long, along with the rest of North American cities that have a suitable climate. You’ll likely see these champions soaring in the sky, waiting for the perfect moment to attack their prey. They also love to stand still on telephone poles.

Red-tailed hawks don’t get attracted to backyards unless you have a big green one. That’s mainly because they feed on mammals, which are hard to find around houses or in backyard feeders. Don’t worry, though; they don’t go around looking for cats and dogs!

You can easily identify red-tailed hawks by their raspy, loud screams. Do you know that shrill hawk scream that sometimes appears in Hollywood movies? All of these screams are courtesy of the red-tailed hawk.

You’ll find Cooper’s hawks in Florida all year long, and they spread throughout North America, as well. These predatory hawks are known for their love of other birds. They feed on all kinds of birds, and they’re excellent stalkers since they do it all the time to get their food.

Cooper’s hawks are mostly found around wooded areas and forests. Nevertheless, you may spot one of them in your backyard from time to time, as some stray birds like to hang around suburban areas. That would be bad news to the birds in your backyard, though!

These prey hawks are notorious for their stalking and capturing abilities. While most falcons merely bite into their chosen bird food, Cooper’s hawks have a more violent approach. These hawks take their prey and continually squeeze it until it dies. Alternatively, they may resort to carrying their food to a pond and keeping it underwater until it ceases motion.

The northern harrier is the only species on our list that’s native to North America. These hawks breed all the way to northern Canada, although they spend their winters in southern areas, like Florida. You’ll rarely see one of those in Florida during the summer.

Northern harriers have some traits that are similar to owls. They depend on both hearing and seeing senses when hunting for food. They sometimes stalk birds that have larger bodies than theirs, and they’re able to kill them by pushing them down to rivers and bonds and holding them underwater until they stop moving, signaling the end of their lives.

Northern harriers have smaller bodies than red-tailed hawks, but they’re still larger than sharp-shinned ones. Their bodies are a bit slender, and they have wide wings with rounded tail tips. Their faces look like owls, so you may use that fact to identify them.

You’ll mostly find northern harriers in forests and marshes. They don’t build nests on top of trees; instead, their nests are mostly found in the ground, hidden among the grass.

Broad-winged hawks mostly live and breed around the central regions of Florida. And in the winter, they migrate to the state’s southern part. These hawks migrate in groups of thousands, and they move in large flocks called kettles. Furthermore, during their migration, they fly close to mountain tips and coastlines, which explains their love for Florida.

These hawks are small and known for their compact, chunky bodies. And unlike most small hawks, they have relatively short tails with squared tips.

You’ll find broad-winged hawks gliding through the sky, looking for their next prey. They feed on birds that perch on top of trees. Additionally, they have a distinctive piercing pitch for a whistle.

Broad-winged hawks are rarely around backyards of suburban areas, as they spend most of their time in the forest.

If you’re visiting Florida soon or already living there, there’s a high chance you’ll run across one of the state’s seven hawk species.

They’re diverse, beautiful, and abundant, and you’ll be lucky to see one of them hunting or stalking another bird. If you want to spot Florida’s different bird species, take a look at this comprehensive list of the state’s woodpeckers.