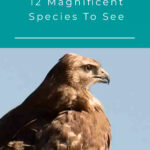 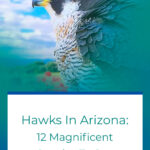 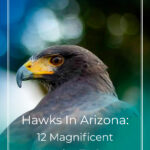 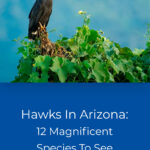 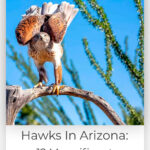 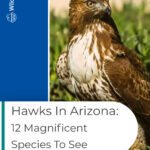 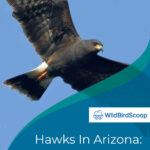 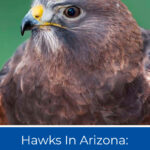 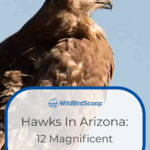 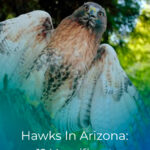 Did you know that Arizona is the sixth largest state in the U.S.? It covers over 114,000 square miles. Most of it is made up of parklands, public forests, and state trust lands.

Even though this vast state is mostly covered in low-elevation deserts, it has several man-made lakes. What’s even more exciting is that Arizona has the most extensive community of evergreen ponderosa pine trees in the world.

All this natural landscape makes Arizona the ideal home for many bird species. So, it won’t come as a surprise when we tell you that the Arizona Bird Committee (ABC) categorizes over 560 bird species in Arizona, including the state’s official bird, the Cactus Wren.

Yet, one of the most interesting bird species in Arizona is the hawks. That’s why, in this article, we’ll focus on the 12 different species of hawks in Arizona and tell you where you can find them. Let’s get started!

Ferruginous hawks are the largest North American hawk species. However, their feet are quite small in comparison. These raptors, or birds of prey, can be seen year-round in Arizona’s northern areas, while those found in the southern parts are typically winter migrants.

They share a common trait with the rough-legged hawk. Both of these species have feathers covering the entire length of their legs and light-colored undersides.

Red-tailed hawks are the second-largest species found in North America. This year-round resident of Arizona is found in almost all regions of the state and are easily distinguished by their cinnamon-red tails.

You can typically find red-tailed hawks perching on tall structures, like trees, billboards, and even utility poles. They share this quality with other hawks in the buteo family.

Their favorite foods include small to medium-sized rodents, rabbits, voles, and ground squirrels.

Cooper’s hawks are also part of the accipiter species, which are known to inhabit dense forestlands. Even so, they can also be found in urban areas, such as Tucson, Phoenix, and other cities.

These predators have recognizable red eyes with dark pupils. They enjoy feeding on chipmunks, mice, as well as medium-sized birds, like flickers and robins.

The broad-winged hawks are only seen near the western parts of the Grand Canyon, usually in the spring when the weather starts getting warmer. They start their migration from South America in the fall and reach North America as the weather warms up.

These raptors have a quite colorful appearance; they have reddish-brown heads with wide white and black stripes on their tails. Their undersides are pale and less distinct.

Their diet consists of small mammals and various types of insects. They also feed on reptiles, such as lizards and snakes, and amphibians.

Sharp-shinned hawks, or sharpies, belong to the accipiter family of raptors and are known for their long tails and short wings. The tips of their wings are more rounded than other hawk species, which is how they’re able to glide smoothly between trees. They’re easily recognizable by their horizontal red-orange bars on the wingtips and breasts.

However, you can also spot sharpies lurking around your backyard bird feeders, looking for their next meal. A significant part of their diet consists of songbirds. They also feed on frogs, rodents, and medium to large-sized insects.

Northern goshawks are accipiters that are found in Arizona at all times of the year, mostly in the eastern part of the state. You can recognize them by their long tails and short wings.

They also have white stripes above their eyes. This is a distinguishable feature because their heads are dark in color.

The name ‘goshawk’ means ‘goose hawk’ in Old English. This could be a direct reference to the fact that they like feeding on other birds, in addition to various reptiles, insects, and mammals.

Even though the breeding ground of the rough-legged hawk is in the northern regions of the Arctic, you can see it in Arizona during the winter. It’s easily identifiable thanks to its fully-feathered legs.

You can also identify them by their appearance, thanks to the large, dark-colored patches on their wings. They also have pale underside plumage that runs to the ends of their tails.

Being part of the buteo family, rough-legged hawks like to perch and wait for their prey. Their main food during the colder months are mice, voles, and rabbits.

You can easily identify the broad wings of Harris’s hawk, especially since it can often be found in many urban areas all around Arizona. In fact, they’re some of the most sociable hawks and are even known to hunt in groups, which is rare for raptors.

Harris’s hawks are typical buteo raptors that perch-and-wait for hares, lizards, and a ground squirrel or two. They’re covered in dark brown feathers with copper-red patches.

Gray hawks are some of the largest of the buteo clan. They usually remain in the southeastern corner of the state.

True to their name, they’re covered in gray feathers. Only their tails show some black-and-white bands.

Their broad wings allow them to lazily drift among the clouds before swooping down on their prey. While they’re known to feed on frogs, insects, and small mammals, their favorite meal is spiny and whiptail lizards.

Boasting broad wings, common black hawks perch lower than their fellow buteos. Then, they suddenly swoop down to catch their prey using their razor-sharp talons and yellow bills.

While they’re mainly black all over, they do have one wide white stripe on their short tails.

These raptors eat small mammals and eggs. You can also find them perching on a low branch over water to catch fish, frogs, and even crabs.

Zone-tailed hawks are typically spotted in the central regions of Arizona, especially in the spring and summer times. Even though zone-tailed hawks have short legs, you may find it hard to distinguish between them and their fellow buteos, the common black hawks.

One feature that sets them apart is that zone-tailed hawks have silver-colored tails and wings.

They also share similar features with the turkey vulture. It’s even been suggested that they imitate it to trick their prey. Their favorite meals consist of small rodents, toads, and even fish.

Swainson’s hawks have a migration range to the west of Arizona and a breeding range to the east. You might catch a glimpse of them as they travel in huge flocks, known as kettles, in the early spring and fall.

Their undersides are light-colored, which contrasts with their dark gray or brown backs.

If you want to see more of these raptors, you’ll have to wait for summertime, when they can be seen perching high above. They sit patiently and scan the ground in search of their prey, which includes insects, lizards, and rodents.

Arizona combines some of the most varied assortment of landforms in the United States. It has regions with low elevation, while other areas rise 4,000 feet above sea level.

The Grand Canyon State has a distinctive climate and unique topography that make it a perfect breeding ground for a variety of birds, including such a wide selection of hawks. These magnificent creatures can be found in any of the 32 different Arizonian canyons, in its mountain ranges, as well as its six national forests.

Whether you’re a fan of these raptors or not, you can’t help but be fascinated by their impressive beauty and larger-than-life demeanor.