Hawks In Illinois: 10 Spectacular Species You Need To See 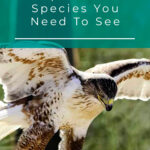 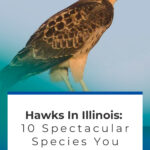 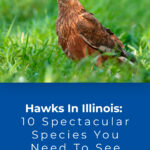 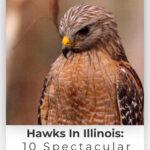 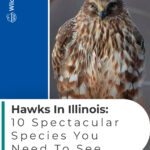 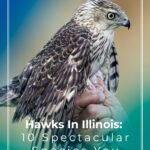 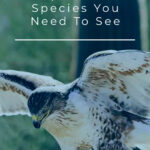 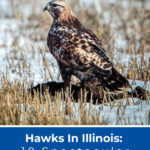 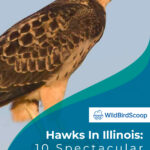 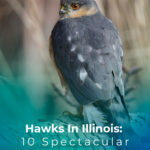 The Land of Lincoln lies in the midwestern heart of America, and with an area spanning over 57,915 square miles, you can expect a lot of bird species to live in Illinois.

In fact, out of the 800 bird species recorded in North America, about half of those species are recorded in the Prairie State. In this article, we’ll dive in deeper and focus specifically on the hawks in Illinois, including brief overviews and all the biological information about each one of the 10 species found in the state. So without further ado, let’s dive in!

Red-tailed hawks are among the most common species of hawks in Illinois and the United States as a whole, with over 95 percent of the world’s red-tailed hawk population nesting in the North American continent.

The red-tailed variety of birds represents the standard for a typical buteo hawk with rounded broad wings and a short wide tail. They have a reddish-brown back with a pale streaked belly, and a distinct physical feature of the red-tailed hawk is, of course, its cinnamon red tail.

They’re usually active and most seen during the day. Since they typically feed on larger birds, it’s not common to see one lurking around bird feeders, but they hunt a wide range of prey, so you may find the red-tailed bird chowing down on small mammals, like voles, squirrels, or rabbits.

Cooper’s hawks are medium-sized birds, with a size that’s comparable to a crow. These birds of prey are characterized by sexual dimorphism, which means that males and females are largely different in terms of size, as seen above.

Adult Cooper’s hawks are known for the warm reddish bars on their chests and their steely blue-gray backs. They also have distinctive bands on their tails, which along with the less diffuse bars on the underparts, make them distinguishable from sharp-shinned hawks.

Unlike the red-tailed hawk, Cooper’s hawks might be found lurking around bird feeders waiting to take their prey by surprise, which is why they can be found nesting in backyards despite preferring wooded areas for habitat.

Red-shouldered hawks are characterized by having a colorful body, including warm reddish-brown bars on the chest and heavily black and white checkered wings. They also have a black tail with multiple white streaks.

Find this species in Illinois all year long and listen for their very distinct whistling hawk sound that’s particularly noticeable in the woods.

They mainly feed on small mammals like rodents, as well as amphibians, reptiles, and other birds. For that reason, the ideal location to spot their nests is in wooded areas with a small body of water nearby, such as rivers and swamps.

Broad-winged hawks are relatively small in terms of size, but don’t mistake their small bodies for meekness: they’re extremely protective of their nests. They usually set a wide area of separation from other birds of prey and have an ear-piercing and intimidating whistle.

Adult broad-winged hawks have reddish-brown heads with highly characteristic broad black and white bands on their tails, and they’re most commonly found in wooded areas, which are their preferred habitats during their temporary tenure in Illinois.

Unlike the red-shouldered hawk, you can only find these broad-winged birds in Illinois during the mating season in summer, as they migrate to the south in large flocks in the winter.

As the name suggests, rough-legged hawks are one of the very few hawk species that have feathers that cover their legs. They also have a characteristic mottled appearance and can sport a wide range of plumage shades, including the difference between males and females. Females have pale heads and dark bellies, and though males have a similar color pattern, their feathers are more mottled.

The relatively large hawks breed in the Arctic region and visit Illinois during their non-breeding season in the winter, making it the ideal time of the year to spot these hawks. If you’re looking for these migratory birds, look up; you can spot the rough-legged hawks perching on utility poles and fence posts and the tops of trees.

Swainson’s hawk is known for its very long wingspan and its reddish-brown chest feathers that get lighter toward their bellies. They’re medium-sized hawks that are found in a few pockets in the northwestern region of the state.

They have a significantly long migration range, too, as the social raptors head to southern Latin America in Uruguay and Argentina in large flocks. When they’re in Illinois, however, you can spot the birds perching on utility poles and fence posts in summer and spring. They feast mainly on insects — especially grasshoppers — which is why they’re also called the “grasshopper hawk.”

The northern harrier is the only member of the harrier family that can be spotted in North America. Though genetically classified as hawks, harriers share traits with owls, like depending on their heightened sense of hearing to hunt down their prey.

They rely on drowning their prey in water to subdue them, which shows their high level of intelligence among other hawk species. Due to their unique method of hunting, they mainly live in open fields and marches as well as riversides.

Northern harriers can be found all across the continent, and their breeding range can be as far up north as Canada. However, they’re usually found in Illinois during winter.

The sharp-shinned hawk isn’t only the smallest on our list, but it’s also the smallest hawk in all of North America.

The small hawks are known for lurking around backyard feeders. While they’re fun to observe, you should always keep in mind that they’re still dangerous birds of prey, so, if you spot a sharp-shinned bird in your backyard, you should probably take down your feeders for a week or two to protect the songbirds and smaller species who might stop by.

These hawks are usually found in packs during migration and are easily identifiable thanks to their small rounded bodies, small wings, and very long tails. The bird also has a dark blue-gray back and yellow-orange and white bars on its breast.

Northern goshawks are one of the most challenging species to find in Illinois despite being relatively large in size. This is because the bird typically prefers to stay within the heavy forests of the state, so you’ll need a little luck and lots of determination to stumble across one of them.

But if you do manage to spot this goshawk, don’t get too close. These hawks like to be appreciated from a distance, as they’re incredibly protective of their nests and reportedly attack people who come too close to their nests.

You’ll recognize this bird by its characteristic matte gray head, notable white line on its face, and bright red eyes.

Last but not least, the ferruginous hawk is one of the largest hawk species to grace the state of Illinois, despite being an accidental species that is not indigenous to the state.

These non-native birds have a huge, easily recognizable wingspan with white underparts and reddish-brown legs. Ferruginous hawks, along with the rough-legged birds, are the only two hawk species to have legs fully covered with feathers. They’re mainly found in the prairies, grasslands, and open spaces feeding on small mammals and insects.

And there you have it: a guide to the 10 hawk species found in the great state of Illinois! The next time you’re in the Prairie State, make sure you’ve got a decent pair of binoculars on hand and keep your eyes peeled to spot some of the most beautiful hawks in America.