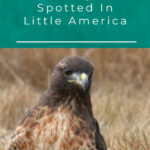 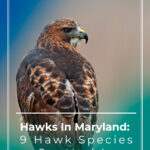 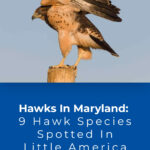 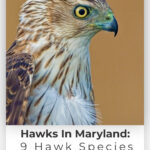 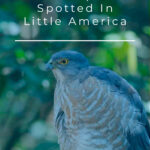 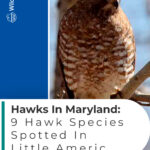 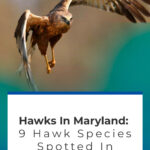 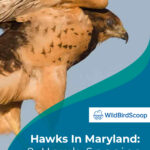 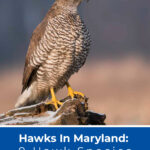 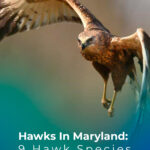 Maryland may be one of the smallest U.S. states, but it has an impressive number of parks — 53 state and 18 national, to be exact.

These parks feature dense woodlands, forests, plains, and rolling hills, providing the perfect habitats for a wide range of hawks in Maryland. The east coast state is home to nine hawk species. Some are year-round residents, while other species are migrants that are usually found either in the winter or summer.

Hawks in Maryland are categorized into three groups: accipiter, buteo, and circus. Keep reading for more detailed insight into each species. You’ll find out more about each type, what they look like, and what they like to hunt, so keep your cameras and binoculars on standby; you don’t want to miss a single second of these stunning creatures!

Cooper’s hawks are year-round residents of Maryland that reside in almost all areas of the state. This species of hawk has even adapted to more populated areas, like suburban backyards, where they wait for the perfect moment to pounce on their prey. Once this accipiter locks down a possible target, it swoops down and grabs with its talons as it flies. Find this bird of prey setting up its nest in thick, dense woodlands.

Cooper’s hawks are medium-sized and share many of the same physical features as the sharp-shinned hawk. They both have slender bodies and graceful maneuvers, however, you can tell them apart because Cooper’s hawk has a larger head.

Sharp-shinned hawks have a non-breeding population in many parts of Maryland. Despite that, you may spot this species of hawk year-round in the western regions of the state.

Cooper’s and sharp-shinned hawks are often mistaken for one another, but you can identify the medium-sized sharpies by their small heads. They also have dark-colored wings and backs, and their contrasting undersides are quite pale. Their long tails, a common accipiter trait, helps these birds hunt for food while in the air, which is a common accipiter trait.

These carnivorous raptors are often seen in backyards, waiting around bird feeders for the smaller winged creatures that make up the majority of their diet (like songbirds, robins, and thrushes) to stop by so they can feast.

Northern goshawks are quite rare in Maryland, and because they tend to stay away from populated areas, you might not see them as frequently as other hawk types. If you do see one of them, though, it’ll most likely be in the winter and mainly in secluded, dense wooded areas and hardwood forests in the western parts of the state.

These predators are identified by the gray plumage covering their entire body. Much like other accipiters, these goshawks have short, round wings and long tails. Their most distinguishing feature, however, has to be their reddish eyes with white eyebrow-like stripes over them.

Goshawks, who get their name from the Old English word for “goose hawk,” are adept at hunting large birds, thanks to their intimidating size and fierce hunting skills. However, their diet isn’t restricted to birds; they hunt amphibians and small mammals, too.

Red-tailed hawks are the most commonly seen raptors, not just in Maryland, but in all of North America. They prefer to set up their nesting grounds in woodlands, and their large size and cinnamon-red tail make them easy to spot in the state year-round.

Like typical buteos, red-tailed hawks are categorized by their wide, rounded wings and short tails. These hawks, who hunt mostly small to medium-sized mammals and rodents, are known to be highly defensive of their nesting ground and its surrounding territory, quickly getting aggressive with any bird that comes too close.

Broad-winged hawks get their name from the size of their wings, of course! They also have a sturdy build, which is a physical trait shared by many other buteo birds.

They have a breeding-only population in Maryland, mainly in the western regions of the state. You’ll find them most commonly from springtime until fall rolls around. After that, they take off in hundreds to begin their migration route south for the winter.

When you get the chance, keep an eye out for them along roadsides and highways. They also like to perch on billboards and fence posts, scouting out their next victims. Their typical prey consists of small rodents and mammals, but they’ve been known to hunt reptiles, amphibians, and small insects as well.

These colorful raptors prefer setting up their nesting grounds in forests and wooded areas. They especially like to be next to marshlands or swamps and are known to reuse their same nesting area year after year. So if you see one at its nest, you’ll likely find it in the same location the following year. Like other hawk species, the red-shouldered hawks will attack animals that get too close to their nesting grounds. This aggression increases during their breeding season.

In contrast with most buteos, red-shouldered hawks are relatively medium-sized rather than extremely large. You can identify them by the rusty brown plumage that covers their shoulders and back and undersides that are also typically rusty brown.

Rough-legged hawks spend their non-breeding months in Maryland. In other words, they’re only seen during the wintertime. Then, during the breeding season, they migrate to northern Canada and the arctic.

You can identify the rough-legged hawk by its fully-feathered legs that keep it warm in the arctic temperatures. In fact, it’s the only raptor in Maryland with feathers covering its entire legs all the way down to its feet, and one of only three North American birds of prey to boast the evolutionary trait at all!

These large-sized predators nest in open grasslands, which makes them easier to spot than other hawk types. Besides nesting location, the rough-legged hawk can be identified by its short tail and wide, round-edged wings, like many other buteos.

Swainson’s hawks have a slender, somewhat elongated body. They’re also known for having a longer wingspan than most buteos. Most of them are gray all over with white undersides, and that contrast makes Swainson’s bird easy to spot even from a distance.

These birds of prey are long-distance migrants who typically travel thousands of miles south for the winter in large flocks called kettles.

In Maryland, Swainson’s hawks can be seen residing in wooded areas and forests. Birds of this species who are living in the north of the state prefer building their nests in high trees near a water source. Find them using the same nesting sites year after year.

Northern harriers have round faces that resemble owls more than hawks. Their bodies are slim and compact, compared with other hawk species. For these reasons, a lot of people mistake them for other prey birds. However, what they lack in body width, they make up for with their long wings and tails.

If appearance wasn’t enough, nesting habits set these birds apart from other hawks, too, as harriers like to set up their nests in marshes rather than in trees high above the ground. They also enjoy hunting low, usually scouting prey over meadows and marshes. They like feeding on reptiles and amphibians as well as small birds and mammals.

Their genus name, circus, is unique to this species. It came about when an 18th-century French naturalist noticed the way both males and females fly in circles as part of their courtship rituals.

Hawks have such a grandeur about them. It’s hard not to be mesmerized by their menacing gaze and graceful presence. If you’re lucky to see one while it’s flying, you’ll be amazed by its unique shape. Thanks to its many state and national parks, you’re sure to spot an impressive variety of hawks in Maryland year-round, so pay close attention to the skies.

It’s also worth mentioning that another prominent bird species in Maryland is woodpeckers. Many of them can be found year-round throughout the state as well. But if you’re only interested in seeing more hawks, however, you might want to make Arizona your next stop. The large, southern state is home to quite an impressive array of hawk species, and you’re sure to find at least one of the hawks that live there.