Hawks In Kentucky: Spot All 7 Birds Of Prey In The Bluegrass State 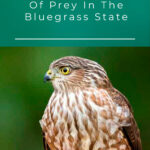 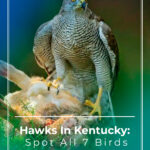 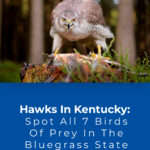 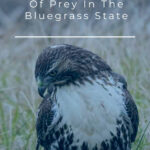 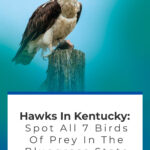 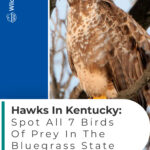 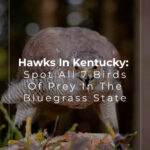 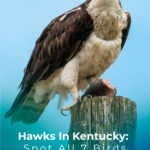 If you love to watch wild birds in their natural habitat, you’ll think Kentucky is heaven. The Bluegrass State alone has up to 22 birds of prey residing within its borders, seven of which are hawks. The rest of these raptors include eagles, falcons, and owls. This means the state is rich in natural resources and forested areas, which supports the existence of so many wild birds.

Once you take a look at our list of hawks in Kentucky, you’ll notice how each hawk is unique in its own way. With various appearances, food habits, and hunting skills, these raptors are a joy to watch in action. Ready to become a bit more familiar with those magnificent birds? Let’s dive in!

The broad-winged hawk can be fascinating to witness with its stocky body and reddish coloring. The perfect time to look for this hawk in Kentucky is during the breeding season, specifically from April to August.

In the fall, the broad-winged hawk migrates to South America in flocks. You may be lucky enough to catch the glorious display of thousands of birds heading south if you live near the mountain ridges or coastlines.

This hawk usually lives in forests and as far away from humans as possible. It also likes to stay near bodies of water, where it’ll happily build its nests. Its favorite trees to nest in include European larch, red pine, white pine, yellow birch, and white oak.

One of the most remarkable things about this hawk is its hunting style. It perches on the highest tree branch awaiting its prey, then swoops down gracefully to capture a frog or a smaller mammal. While hunting, the broad-winged hawk releases a high-pitched whistle.

During the summer, rough-legged hawks stay in the Arctic tundra, where they breed and nest on cliffs and outcroppings. But in the winter, a bird lover may be able to see these raptors in the northern half of Kentucky where it’s much warmer.

Rough-legged hawks come in dark-brown and white colorations. You may also find them in light and dark morphs. They’re known for their long wings and have a body shape that’s quite similar to that of red-tailed hawks.

Besides the feathers that go all the way to their feet, the rough-legged hawk is unique because of its hunting style, which revolves around them hovering in the face of the wind in search of their prey. They sometimes hunt from elevated positions, too.

They hunt a wide range of prey, with their food usually consisting of small rodents in the winter and lemmings, which can be found in abundance in the Arctic tundra, in the summer. They’ll also eat arctic ground squirrels, hares, and even a few smaller-sized birds, like the ptarmigan.

The red-tailed hawk is another powerful bird of prey you’ll likely love to see in Kentucky. This species is commonly spotted across North America, and you can catch one perched on a roadside pole in Kentucky at any time of the year.

This beautiful hawk has broad and rounded wings with creamy undersides and brown markings. And even though it’s one of the largest hawk species in Kentucky, its average weight is only two pounds.

The diet of a red-tailed hawk usually consists of small mammals like rats, squirrels, and rabbits, but it’ll also occasionally eat snakes or other birds, including starlings and pheasants.

Because the red-tailed hawk adapts almost instantly to its surroundings, you can find it anywhere. You may witness it in parks, the countryside, in the woods, and even near your own backyard. These hawks usually build their nests in the tallest of trees so that they’ll have a wide view of the surrounding landscape. However, they’ll also nest on the edges of cliffs or even artificial structures.

Another rather large hawk that lives in Kentucky is the northern goshawk. While it’s easy to identify based on its remarkable appearance, finding it isn’t that simple. This is because this raptor prefers to stay deep within forests and away from civilization.

The northern goshawk has many features that no one could miss, and you don’t have to be an expert on birds to know one when you see it. For example, this bird has remarkably red eyes and a blue-gray or brown upper body. The7 underbody, on the other hand, is usually white or light-gray with some barring.

This mighty bird has an appetite for many things, including mammals, birds, and reptiles. To hunt, the northern goshawk switches between short flights and stops at elevated perches as it searches for its prey. Once it finds its target, the hawk will glide swiftly and silently to catch it.

When it comes to nesting habits, the northern goshawk chooses the largest tree it can find to build a home for its youngsters. Beech, maple, aspen, and oak trees are favorites of the species. The females will do most of the work, but sometimes the males will help with making the nests as well.

Many people mistake Cooper’s hawks for the sharp-shinned species, both of which reside in Kentucky. These two birds of prey have similar coloring, which consists of orange bars on their upper chests and blue-gray wings and backs.

Cooper’s hawks like to feed on songbirds, which may help you attract these raptors by installing bird feeders in your yard. If you’re not that enthusiastic about watching these predators capturing their prey near your house, however, you might consider taking down your feeders.

These hawks are found year-round in Kentucky, mostly on the edge of forests. While they’re not exactly fans of highly-populated areas, you might still catch a glimpse of one in towns or suburbs. As long as there are trees in your street, there’s a good chance that Cooper’s hawks will visit.

One of the smallest species in Kentucky, sharp-shinned hawks are more frequently seen near forested areas, and their long legs and short wings give them an advantage when hunting. This unique body shape allows them to navigate forests at high speeds in search of their prey. They begin hunting while hidden, then burst suddenly to catch their victims by surprise.

When they’re not in dense forests, sharp-shinned hawks can pay you a visit if your backyard bird feeders attract songbirds.

Last but not least in our article is the red-shouldered hawk. This bird can be found in Kentucky year-round. These hawks mostly stay in wet forests, especially by creeks or streams, and when it’s springtime, red-shouldered hawks can be seen flying around their nests.

Thanks to their distinctive appearance, it’s pretty hard to miss these birds. As their name suggests, these birds of prey have reddish-brown undersides, and they also have a unique white banding on their rather long tails. Their bodies are medium-sized and slim. An effective way to identify a red-shouldered hawk is by taking a closer look at its wingtips. You should find beautiful translucent crescents there.

Red-shouldered hawks usually prey on small mammals, lizards, and amphibians, and they’re masters when it comes to hunting. They’ll wait for their prey on the high branches of trees, then they’ll descend and glide to ensnare their target when it appears.

Though mammals are their primary prey, red-shouldered hawks will feed on snakes, toads, and crayfish. These raptors also frequent bird feeders to snatch a sparrow, dove, or starling.

Kentucky is a haven for a multitude of wild birds, including fierce raptors such as hawks, eagles, and falcons.

Hawks in Kentucky come in various shapes and sizes, and each type has its own personality and unique set of hunting skills, and we hope that, after reading our article, you’ll be able to identify all seven species of hawks in Kentucky.

If you’re interested in more wild birds in this state, you’ll definitely want to find out more about the other birds you can find there, including the nine species of woodpeckers in Kentucky you can spot on your next birdwatching outing.