Hawks In Iowa: Find All 10 Species In The Hawkeye State 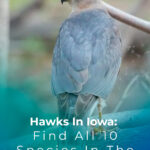 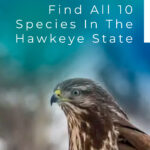 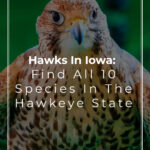 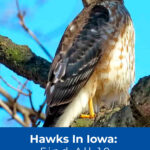 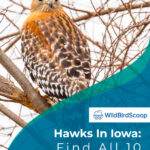 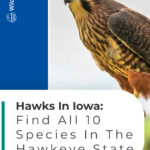 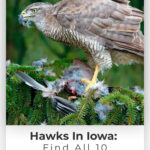 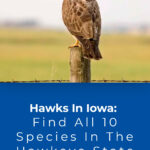 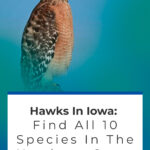 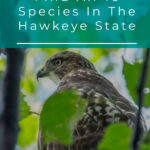 Thanks to its diverse forest areas, a variety of wild animals including mammals, amphibians, reptiles, and insects have no problem calling Iowa home. The state also hosts a number of birds of prey, like eagles, hawks, and owls, which is great news for the avid birdwatcher.

Ten species of hawks can be found in Iowa, and considering the United States has only 25 species total, we’d like to believe the Hawkeye State has a pretty large hawk population. These species breed and nest around the agricultural land that covers 60 percent of the state, and here, we’ll take a closer look at each of their behaviors and characteristics.

Because red-shouldered hawks spend most of their time in the forest, they don’t appear around backyards frequently, which is good news for the small birds that visit your bird feeder! These hawks love the woods because it provides the food they need and the large space gives them the chance to take their time hunting for small mammals, amphibians, reptiles, and birds to eat.

Though they rarely frequent a backyard bird feeder, you may catch sight of them around suburban areas; they’ll likely be searching for squirrels to prey on. You’ll recognize these medium-sized birds by their checkered wings, red-striped chests, and black tails with skinny white stripes.

Sitting on the long list of hawks that look similar to the red-tailed species are Swainson’s hawks, and your best chance at identifying these birds is by looking for the light patch of feathers on their chins.

If you find yourself in Iowa during the spring or summertime, you’ll likely see this bird of prey. They arrive there in the springtime and begin breeding when summer rolls around. If you’re around during colder months of the year, though, you probably won’t have much luck seeing this species. When September comes around, they make the nearly 6,000-mile journey south to Argentina.

This bird’s diet varies depending on the season. You’ll find these birds hunting for small mammals and reptiles during the summertime and large insects during other seasons. While it winters in Argentina, however, this hawk is known to feed on nomadic dragonflies.

If you find yourself in Iowa, you’ll find the Cooper’s hawk species spending time near the edges of fields and inside the woods. Blue-gray bodies, reddish-barred underparts, and dark banded tails are easy identifiers of this species.

If you’re a backyard bird watcher, you’ll be disappointed to learn you don’t want to see one of Cooper’s hawks around your bird feeders. Because they fly so quickly, they easily sneak up on and attack songbirds and other small birds, so if you do happen to notice a member of this species fluttering about in your yard, put the feeder away for about two weeks or so.

Not only are these birds fast flyers, but they’re acrobatic, too, moving with the accipiter’s typical “flap-flap-guide” pattern. They’re agile, and their moves often bring their flight close to the ground.

Northern goshawks have light gray underbodies and bluish-gray upper bodies. Their heads are dark, and their eyes have a distinctive deep red color, making the bird easy to identify. You’ll rarely catch sight of them around your backyard, as the northern goshawk mostly stays away from civilization. Even in forests, they’re hard to catch, preferring to stay hidden from the eyes.

These hawks are the largest members of the accipiter bunch, and these stealthy predatory birds sit on high perches waiting to attack. They mostly eat birds, like grouse and crows, and small mammals.

The rough-legged hawk, or buzzard, has a nearly identical body to that of a ferruginous hawk. The experienced bird watcher, however, knows he can distinguish the two species by their tails. The buzzard’s tail is white with a broad white tip, while the ferruginous hawk’s is completely light and has no dark patches.

Rough-legged hawks get their names from the feathers that cover their entire bodies, going all the way down to their talons and legs. They visit Iowa mostly during the winter months, and these feathers help keep them warm in the frigid temperatures.

North America’s only harrier, the northern harrier, likes to nest and breed around open habitats and woodlands. They’re known for their flying position — low, near the ground. Though they stay closer to the ground than other birds might, you might not get a good look at their bodies because they’re extremely agile; their acrobatic moves are sure to confuse your eyes.

The northern harrier’s excellent sense of hearing makes it difficult for their prey to escape or scurry off; the hawk will catch small mammals and birds before they even realize they’re being watched.

The medium-sized raptor has long, broad wings and a rounded tail. Males of this species have gray bodies, white underparts, and black-banded tails, while females have brown streaks on their undersides. Both sexes, however, sport a white rump that’s easily identifiable while they’re in flight.

The ferruginous hawk has a large, heavy body, but that doesn’t mean it sacrifices any speed; these birds fly with fast, agile movements. You’ll find these birds in Iowa during their breeding season, which is in the late winter around February and March.

The ferruginous hawk occurs in two different morphs. The light morph has white underparts and rust-colored legs while its darker counterpart is a chocolate color.

These hawks feed on almost anything they can find on the ground, including rats, squirrels, and rabbits.They’ve even been known to swoop in and snatch smaller birds right out of the air.

The red-tailed hawk’s name comes from their distinctive red tails, of course. This is the easiest way to identify them, considering their body shapes are similar to a few other hawk species.

There are two reasons it won’t take you very long to find these red-tailed birds. The first is that they are the most common hawk species found in the United States. The second reason is their adaptability; this species can live and nest nearly anywhere, whether around civilization or deep in the woods.

And if you’ve never seen a red-tailed hawk, there’s a high probability you’ve heard one; when a hawk or eagle appears on a film or television show, the sound used is typically the cry of a red-tailed hawk.

The best way to identify a sharp-shinned hawk is its seemingly disproportionate size. It has a small body and legs that seem too tall to fit it. You’ll likely know you’re looking at one of these birds as soon as you see it, as their bluish-gray bodies and red-orange striped chests are dead giveaways.

Your best chance at taking a photograph of this species is waiting until it’s perched on a tree, which is where it spends most of its time. It’s hard to catch these birds of prey while they’re flying, however, because they fly with such fast movements that they seem like blurs of feathers in the air.

If most of your birdwatching occurs in your backyard, you won’t have much luck spotting this bird. Broad-winged birds prefer to stay away from humans, protected in the woods. Their small bodies enable them to adapt to life in the forest easily.

The broad-winged hawk stays in Iowa during the summertime, but when the cold winter months roll around, it heads to South America. When it comes to migration, broad-winged hawks are pretty impressive birds. They fly for over 4,000 miles to winter in a warm location, and when it’s time to return, they make the long trip yet again.

Though we can’t quite give you all the information about every hawk in Iowa, we hope our overview has proved that the species of hawks visible in this state aren’t to be missed. Set out to visit the hawks’ favorite places and keep your camera ready to take spectacular photographs, and you’re bound to have a pretty fun trip and spot a species or two!