Hawks In Idaho: 10 Birds Of Prey To Look For 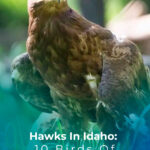 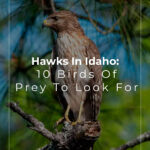 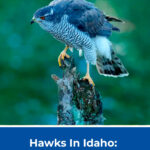 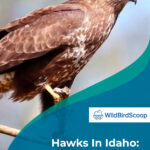 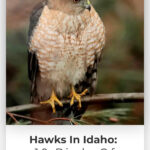 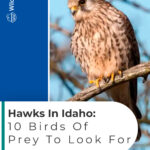 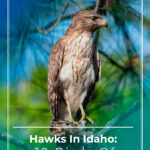 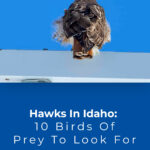 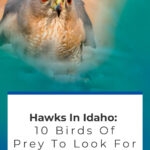 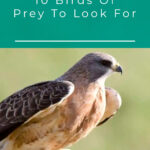 Do you know Idaho is recognized as the United States’ Gem State? The state’s precious collection of gemstones and rocks earned it the official nickname, but those aren’t the only noteworthy things about Idaho.

The state is also known for its wildlife preserve, and as a result, there is a wide variety of birds, including hawks, falcons, and eagles that call Idaho home. With almost 4,523,000 acres of wild land, the state has almost no roads, giving the birds of prey a chance to fly freely and build their nests.

Out of 25 hawk species in the United States,10 of them can be found in Idaho, and today, we’re going to learn a bit more about each one of them.

Cooper’s hawks are notorious bird hunters that are known to lurk around backyard bird feeders looking for prey. Their victims include woodpeckers, doves, and quail. Their bodies aren’t particularly large, but, unfortunately for the creatures they set their sights on, their strength and violence make up for what they lack in size.

This bird boasts the classic accipiter shape, complete with broad, round wings and a long tail, and it also has a blue-gray hue with a red-barred belly and black-banded tail.

Cooper’s hawk spends the whole year in Idaho, except the pairs that live far up north. Those will sometimes migrate to warm places during winter, then return to Idaho in the spring for the breeding season.

Ferruginous hawks are among the largest and heaviest birds of prey in the United States. There are only a few of them in Idaho, though, and your chances of catching a glimpse of them are better around March and February. That’s when they return to the state for their breeding season.

Ferruginous hawks occur in two different morphs: light, which has white underparts, rusty legs, and pale legs, and dark, which are rarer and are a deep, chocolatey color. Thanks to these birds’ large bodies, they can prey on their victims easily; birds of this species feed on almost anything they can find around, including rabbits, rats, mice, ground squirrels, and antelope squirrels. They’ll also eat reptiles, small birds, and amphibians.

This raptor’s name comes from the Old English word for “goose hawk,” a reference to its tendency to prey on birds. You can find the northern goshawk in Idaho all year-round, and it mostly builds its nests in the Sawtooth National Forest. The forest is these hawks’ preferred habitat because it provides everything they eat, and the list is long; rabbits, shrews, mice, chipmunks, foxes, geese, and crows are all on the menu for this goshawk.

These large woodland birds are also known for being predators of other birds of prey, including kestrels and owls.

Despite their names, northern harriers are present in Idaho’s southern region, not the north. That’s mainly because the southern part of the state has lots of open areas, giving members of this species plenty of space to take flight and look for prey.

These harriers are known for their agility and acrobatic moves. They skim low above open areas, and they locate their prey by their impeccable hearing sense. Their victims mostly consist of small mammals, along with birds and amphibians.

Males of this species have gray backs, white bellies, and black wingtips, while females have white bellies with brown stripes. Both sexes sport a patch of white tail feathers that are visible while they’re in flight.

The red-tailed hawk is nearly the most common species in Idaho and North America as a whole. If you run across a hawk while taking a stroll around the state, there’s a high chance it’s a red-tailed hawk.

These buteo birds are almost always found perching on power poles scouting the land for their next meal. When they’re not up there, they’re soaring low over open areas, looking for their next victim. The red-tailed bird’s diet includes small mammals, like voles, rabbits, and squirrels, reptiles, and smaller birds.

These hawks have broad tails and wings, and their bodies are stockier than your average hawk. As their name implies, you’ll recognize this species by the trademark red tail.

The rough-legged hawk, or buzzard as some people like to call it, only makes an appearance in Idaho during the winter months. The bird of prey originally lives and breeds in the northern tundra, but it migrates to Idaho in the cold months.

Rough-legged hawks are strikingly similar to Ferruginous hawks, especially in the fact that they both have fully feathered legs. However, you can tell them apart by the broad dark tip on the buzzard’s light tail.

Find this large bird eating lemmings, especially during the summer when these creatures make up about 80 percent of its diet. During the winter, find the rough-legged hawk scouting out voles, mice, squirrels, and other small mammals.

The sharp-shinned hawk makes Idaho’s forest habitats home for the majority of the year. It’s one of the smallest hawks in the world and the smallest in the United States, and on top of that, it’s the hawk that’s most likely to appear in your backyard.

You’ll hardly catch sight of the sharp-shinned hawk while it’s flying. These preying birds fly soar quickly, and their small bodies help them do that. You’ll only see a blurry feather ball. Your only chance at identifying the hawk while flying is its exceptionally long legs and tails.

When the bird is still, you’ll recognize the sharp-shinned hawk by its bluish-gray body and red-orange striped chest.

Broad-winged hawks are small and chunky with reddish-brown heads, striped underparts, and pale feathers on the undersides of their wings. Plus, their tails are short, so they’re relatively easy to identify. They also have an unmistakable whistle that sounds like a piercing pitch.

You’ll rarely catch sight of the broad-winged hawk in your backyard, and that’s because these birds prefer to live in open habitats and forests. You will, however, see the broad-winged birds as they migrate; they head to the southern region in large groups called kettles.

You may confuse the Swainson’s hawk with the red-tailed species since they’re nearly the same size, however, you can distinguish Swainson’s birds by the distinctive white patches on their chins and their wings that are more pointed towards the end.

These prey birds are known to live near agricultural areas and grasslands, and you may run across one in your backyard now and then. They look for small mammals and reptiles to eat, especially in the summertime. During other seasons, though, you’ll find Swainson’s hawk chowing down on large insects, like grasshoppers and caterpillars.

Though the most distinctive thing about the red-shouldered hawk is its famous whistle, some people also use the pale crescent near their wing’s tips to identify them. You’ll also know the medium-sized bird by its checkered wings and red-barred chest.

This species of bird is known for living around wooded areas and forests and scouting a small mammal, bird, reptile, or amphibian to be their next meal. You may also run across one of their nests perched high on a tree.

The abundance of forests and woodlands in Idaho is a major contributor to the number of bird species there, so there’s a high chance you’ll run across one or two hawks on your visit to the state. And if you’re lucky enough, you may find one of their nests! Just make sure you don’t linger around them for too long — you don’t want to cause any unnecessary stress to the birds.

If you want to catch sight of other birds in Idaho, you can check the state’s woodpeckers here.