Hawks In Georgia: 9 Species You’ve Got To See In This State 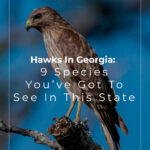 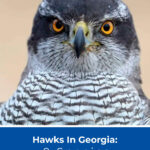 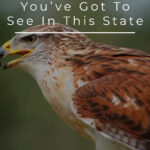 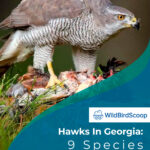 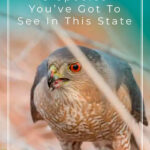 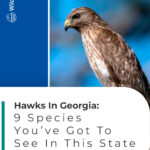 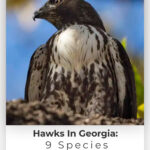 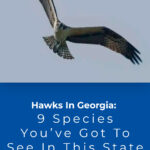 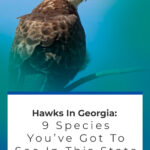 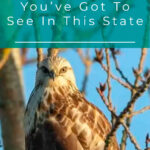 Georgia is a stunning state that’s home to a wide range of natural landscapes, effectively attracting a great variety of wildlife, from black bears, coyotes, and foxes to alligators, sea turtles, and rattlesnakes.

But make no mistake, Georgia has an extensive list of birds, too. To be exact, there are 425 species of birds included in the Checklist and Records Committee of the Georgia Ornithological Society (GOSRC) as of July 2019, with 7 additional species classed as provisional.

Thanks to its forests, mountains, and wildlife refugees, Georgia has numerous hawk species inhabiting its land. Below, we’re discussing the hawk species you can commonly find in Georgia.

Sharp-shinned hawks are on the tinier side of the spectrum with long tails and short, rounded wings. Their small heads often don’t project beyond the “wrists” of the wings in flight.

Females tend to be notably larger than males, but all adults of this species have slaty blue-gray top feathers and narrow, horizontal red-orange streaks on the chest. Immature sharp-shinned hawks are brown with vertical bands on white underparts.

Bigger than a sharp-shinned hawk and about the size of a crow (although males can be much smaller), Cooper’s hawk is a medium-sized bird of prey that sports the classic accipiter shape with broad, rounded wings and a very long tail.

Adults have steely blue-gray top feathers, warm reddish streaks on their chests and bellies, as well as thick dark bands on their tails. Immature hawks of this species are brown on top with crisp brown banding on the upper breast, giving them a more hooded look compared to young sharp-shinned hawks’ more diffuse streaking.

Cooper’s hawk flies with a flap-flap-glide pattern and lives in wooded habitats, ranging from deep forests to leafy subdivisions and backyards. This species is easily spotted in the Altamaha Wildlife Management Area, the Piedmont National Wildlife Refuge, and the Kennesaw Mountain National Battlefield.

Northern goshawks aren’t just large hawks — they’re the largest of the accipiters. Females can get as large as a red-tailed hawk while males are just a bit bigger than a female Cooper’s hawk.

These hawks feature broad, rounded wings and long tails. Adults have dark slate gray top feathers with pale gray barred underparts, and their heads are dark with a wide white stripe above the eye.

Brown and streaky, immature goshawks also have narrow dark bands in the tail. Northern goshawks are stealthy predators that fly with a few slow wingbeats coupled with short glides. They live primarily in coniferous forests, but they may reside in deciduous hardwood forests as well.

Red-shouldered hawks are medium-sized birds of prey — a lot smaller than a red-tailed hawk but larger than the broad-winged bird — with broad, rounded wings and medium-length tails. You’ll know them when you see them, as they impart a distinctive “reaching” posture in flight.

Adults are colorful with dark-and-white checkered wings, reddish barring on the chest, and a black tail with narrow white bands. On the other hand, immatures are brown with white underparts that are streaked brown.

Red-shouldered Hawks produce a distinctive whistled kee-rah sound and they hunt small mammals, amphibians, and reptiles. Red-shouldered Hawks live in deciduous woodlands, often near rivers and swamps. The Jekyll Island in Georgia is one of the best places to spot them.

The female short-tailed hawk is generally larger than a male, but the sexes are comparable in the field.

The short-tailed bird’s wings are relatively long for their size, but they reach the tail tip when perched and give the appearance of having an unusually short tail, hence, the crow-sized bird’s name. However, their tail length is actually average for the genus.

Short-tailed hawks breed mainly in tall, dense forests near water, but when they’re not breeding, they reside near coastal areas, forests, and forested edge.

Broad-winged hawks are small raptors with bulky bodies, large heads, and short squared tails. Adults have reddish-brown heads and barred underparts with broad black and white streaks on the tail. Juveniles of this species are lighter brown with wide banding streaking on the sides of the breast and narrow bands on the tail.

This species of hawk typically hunts small animals from perches underneath the forest canopy. A true bird lover will recognize the broad-winged bird’s call: it’s a piercing whistle on a single pitch.

Because these spend lots of time underneath the forest canopy, Brasstown Bald is one of the best places to spot broad-winged hawks in Georgia.

Swainson’s hawks are large, bigger than Cooper’s hawk, with broad wings and short tails. However, their winders are longer and slimmer, typically held in a shallow V-shape when flying.

Swainson’s hawks vary in appearance, but most of them sport light bellies with a dark or reddish-brown breast and brown or gray upperparts. Their underwings carry distinctive white linings that contrast strongly with blackish flight feathers.

These birds of prey are social raptors, always found in groups outside the breeding season. They spend summers in the wide-open spaces of the American West, and in Georgia, you can spot Swainson’s hawk in grasslands and sage flats.

Most red-tailed hawks have rich brown tops and pale underparts with a streaked belly. The tail is cinnamon-red in adults but brown and banded in immature birds. The dark morph birds are chocolate-brown with a rusty red tail, while the rufous morph birds are reddish-brown on the chest with a dark belly.

Though they’re a little smaller and less bulky than a red-tailed hawk, rough-legged hawks are still fairly large birds with broad, long wings. The tail is also longer compared to other buteos, and the wingtips are often slightly swept back from the wrist, giving an M shape to the wing.

Rough-legged hawks breed in the arctic and, in the winter, migrate to open habitats like fields, prairies, deserts, and airports in the United States.

With so many fascinating hawks to see in Georgia, it’s no wonder this state is a dream destination for any eager birdwatcher. If you’re a resident or visitor of the Peach State, make sure you have a good field guide and a pair of binoculars handy, and see if you can catch a glimpse at the hawk species who frequent the United States’ southern region.