Hawks In Hawaii: The Few Species You Can Spot Here 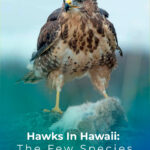 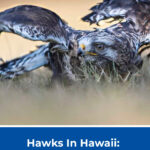 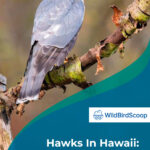 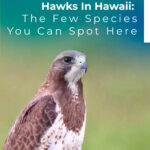 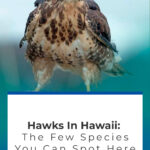 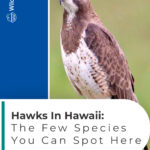 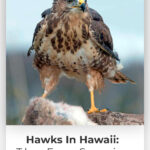 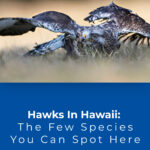 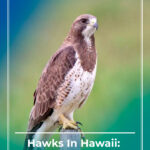 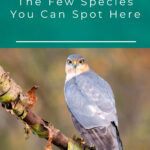 Hawaii is one of the most beautiful and wildlife-rich states in the United States. Comprised of several islands, this stunning state is home to an extensive range of natural environments, allowing to attracting a vast array of interesting animals from the Hawaiian monk seal, Hawaiian Hoary bat, and Humpback whale all the way to the manta ray, chameleon, and mongoose.

But make no mistake, Hawaii also has a long list of birds for avid birdwatchers to check out. In fact, there are 337 species of birds included in the primary checklist documented as occurring in the Hawaiian Islands.

Out of all the bird species in Hawaii, 64 are or were endemic to the islands, 130 are vagrants, and 52 were introduced by humans. So how many slots do hawks fill in this list? Well, unfortunately, only a few.

On account of deforestation, illegal shooting, and other hazards, Hawaii has only 1 native hawk species left – and it’s already near-threatened. Below, we’re the Hawaiian Hawk, along with 2 other vagrant hawks that you can find in Hawaii.

The Hawaiian Hawk, also called ‘Io, is native to Hawaii. It lives exclusively on the islands, and it represents a symbol of royalty in Hawaiian culture. This hawk was believed to be a family or personal god (‘aumakua’), which made it taboo to harm or kill these birds, and they produce piercing, high-pitched calls that sound like their Hawaiian name.

These birds, who are Hawaii’s only native hawk species, occur in both light and dark color morphs. The dark morph features a dark brown head, breast, and underwings, whereas the light morph hawks have dark heads and light breasts and underwings. Adults have yellowish feet and legs while immature individuals have them in a greenish color.

As opportunistic predators, Hawaiian hawks are versatile in their feeding habits, with a diet that includes invasive rodents, insects, and birds. Due to the presence of only a few native land mammals, the Hawaiian hawk’s original diet consisted mainly of flightless ducks and rails that once inhabited the islands. Today, it feeds primarily on introduced animals such as rats, lizards, and game birds.

During the breeding season, one of the pair, most probably the female, acquires a distinctive yellow fore-cap area just above its upper mandible. Although fossil records showed the occurrence of Hawaiian hawks on Moloka’i and Kaua’i, they currently breed only on the Big Island (occasionally seen on Maui, O’ahu, and Kaua’i).

These hawks are, for the most part, non-migratory and solitary, so they remain in and defend their territory all year-round. The ‘Io’s biggest challenges are deforestation from agriculture, development, and logging, as well as habitat degradation from introduced livestock and invasive plants. Additional threats to its population include illegal shooting, poisoning, and collisions.

The Chinese sparrowhawk is a vagrant bird, which means it’s a migrant bird that accidentally ended up in Hawaii, so you may have a bit of a hard time locating it on your own. But if you do stumble across one of these birds of prey, you can identify them rather simply. An adult Chinese sparrowhawk differs from other accipiter species by its dark greyish upperparts, prominent orange-yellow cere, virtually plain underwing coverts, and black-tipped primaries.

Males of this non-native Hawaiian bird species have dark red eyes with a pink-washed breast, while female Chinese sparrowhawks have yellowish eyes and reddish-brown tinted feathers on the breast.

Also a vagrant bird, rough-legged hawks are a bit smaller and less chunky than red-tailed hawks, for example, but still, these are fairly large hawks with broader and longer wings compared to other buteo hawks. Additionally, their tails are longer than those of other buteos. They have wide wingtips that are often swept back from the wrist, showcasing a hint of an M shape in the wing.

Rough-legged hawks are dark-brown hawks featuring bold patterns, and they occur in light and dark morphs. The light morph birds feature pale underwings with dark spots at the ‘bend’ of the wing, while dark morph birds are mostly dark brown with pale trailing edges to the underwing.

Rough-legged hawks breed in the arctic and, during the winter, migrate to open habitats such as fields, prairies, deserts, and airports in the United States.

When hunting, these hawks will usually face into the wind and hover, surveying the ground below for small mammal prey. Members of this hawk species will often perch on fence posts, utility poles, and sometimes even on slender branches at the top of a tree. They fly with their wings raised in sort of a V-shape.

Although there aren’t many to observe, the hawks in Hawaii are certainly fascinating. And as the only remaining hawk species native to the islands, you won’t be able to see the Hawaiian hawk anywhere else since it’s also non-migratory. Unfortunately, this beautiful bird is near threatened, so you’ll need some patience trying to locate it. But once you do, it’ll definitely be worth the effort.