Woodpeckers In Missouri: 7 Species To See While Visiting 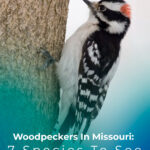 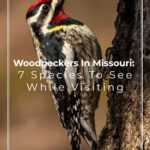 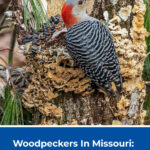 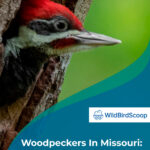 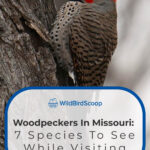 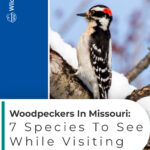 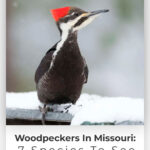 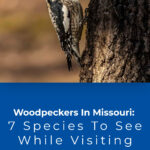 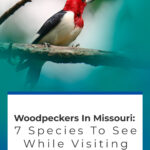 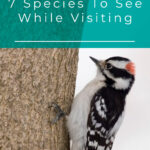 Missouri lies in the middle of the United States, and there you’ll find amazing outdoor areas, like the Missouri River and the forests of the Ozarks, that many animals, including birds, call home.

More than 400 species of birds have been recorded in Missouri, and more than 150 species already live in the state. One of these species is the woodpecker.

Woodpeckers are usually found in forests and open woodlands, and Missouri is full of those. There are about 215 different species of woodpeckers worldwide, and Missouri houses seven of these species. Some of them live in the state year-round, and others migrate, depending on the season.

In this article, we’ll cover all of the woodpeckers you should look for the next time you find yourself in Missouri.

Although they’re called red-bellied woodpeckers, these birds barely have any red on their stomach feathers. These woodpeckers do, however, have narrow black and white lines on their back and wings. Males have red feathers from their napes to the top of their heads, but females only sport red on their napes.

Red-bellied woodpeckers are widely spread across Missouri all year long. They live in forests and open woodlands, but you can also find them in backyards, as they commonly visit bird feeders.

Like other woodpeckers, they feed on insects, fruits, and nuts. They’re easy to attract with sunflower seeds and suet.

Their call is very distinctive, and you’ll usually hear them in the summer and spring.

These woodpeckers are very easy to identify with their definite redheads and white stomachs. While juveniles are less colorful, their brown heads that start turning red during their first winter.

Red-headed woodpeckers need to live in forests with dead trees. They nest and prey on insects, acorns, and bird eggs.

Due to the continuous disappearance of trees, the species’ population has been severely declining, and they’ve had to adapt to modern landscapes. It’s not uncommon to find them spending time in cavities in buildings.

In winter, the red-headed woodpecker migrates towards the south, where acorns are abundant. During this season, they also store extra food in their nests and defend them against bird intruders.

When spring rolls around, they hunt for insects in the air, which distinguishes them from other woodpeckers.

The pileated woodpeckers are the largest in Missouri. The crow-sized bird has a mostly black back, white striped wings, a red triangular crest, and a long beak.

The pileated woodpecker’s diet consists mainly of insects, fruits, and nuts. In the winter, they mostly feed on carpenter ants and beetle larvae.

These woodpeckers mostly reside in the Ozarks’ extensive forests, and they’re less common in the northwest area. The pileated woodpeckers are shy and rarely spotted, but you may occasionally see one in the backyard at a bird feeder. You’ll distinguish them with their shape, color, and their distinctive loud call and drumming.

The downy woodpecker is the smallest bird on our list. They’re mostly black with white stripes, and in comparison to other woodpecker species, they have a smaller bill. A male has a patch of red feathers on its nape, while his female counterpart doesn’t.

These birds mostly live in open woodlands and forests, but you can spot them at suet feeders, orchards, or city parks.

Downy woodpeckers can eat insects that larger woodpeckers can’t eat, like the insects living in weed stems. Though their diet is mostly insects, this woodpecker also eats fruits and nuts.

Downies have a unique and distinctive movement style. Due to their small size, their movement is lighter and quicker than larger woodpeckers. They also have a unique high pitched call that makes them easy to spot. Another way to indicate the existence of downy woodpeckers is the way they camouflage their nests with fungus and lichen.

Hairy woodpeckers are easily confused with downies, as they look very much alike, but you can use the size of these birds to tell them apart; hairies are larger and have a longer and stronger bill that’s nearly the same size as their heads. These birds also have long, rigid tail feathers that help them climb trees.

Not only do hairy and downy woodpeckers look alike, but they act similarly, too. They eat the same food and are usually found in the same areas. A difference between the two, though, is that hairies forage on larger branches and tree trunks, while downies tend to forage on smaller limbs. Their calls and drumming patterns are also keys to telling the two apart.

One might say that the hairy woodpecker is a lazy worker when it comes to finding food; they usually wait until pileated woodpeckers are done excavating, then they search for the insects that the pileated bird missed.

Thanks to their physical appearance — a slightly brown color, black bars on their backs, black spots on their bellies, grey crowns, and bright yellow feathers on their wings and tails — northern flickers stand out from the rest of Missouri’s woodpeckers.

The northern flicker is found in Missouri at all times of the year in open woodlands, farms, and parks. Though a woodpecker enthusiast has an excellent chance to see one in the summer, they’re not very common in winter. To increase your chances of spotting this bird, look down, not up! Unlike other species of woodpeckers, northern flickers hunt on the ground, mostly looking for ants. They also eat fruits, nuts, and other insects.

Unfortunately, due to the scarcity of the deadwood flickers need for nesting and foraging, their numbers are decreasing significantly.

Sapsuckers migrate to Missouri in winter, occupying open forests and parks. They leave by late April, migrating through northern parts of Missouri to their breeding grounds in Canada.

Yellow-bellied sapsuckers earned their name by using their bills to drill small holes in trees to drink the sweet sap and eat the insects that managed to get themselves caught in the sticky liquid. These woodpeckers prefer to drill into maple trees, and their sap wells attract other flying friends, like hummingbirds and bats. In addition to licking sap from trees, they also forage on fruits, nuts, and berries.

In the past, sapsuckers were considered pests, and they were shot because of their eating habits. Now, they’re protected, and their population is on the rise.

Much to the delight of the avid woodpecker watcher, the Show-Me State is a great place to see these fascinating birds. While some of them are migrants, only making the state their habitat for one or two seasons a year, others live and breed in Missouri year-round. So no matter when you find yourself there, you’ll be able to pull out the field guide and identify a few species.

Woodpeckers are more than just fun to look at, however; they play an essential role in keeping the balance of our ecosystem. They help by decreasing the number of insects that might seriously damage trees, and their abandoned nest cavities are also used by secondary cavity nesters that can’t build for themselves.

Attract these birds by filling a backyard feeder with suet, or leave dead trees in your yard (so long as they won’t cause you and your home any harm) for woodpeckers to forage. Then, sit back with a cup of tea and watch as these feathered-friends visit your neighborhood a time or two.