Woodpeckers In Nevada: 14 Of The State’s Most Common Species 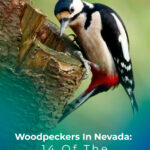 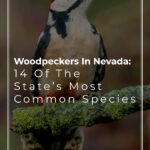 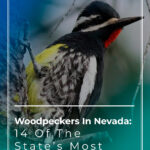 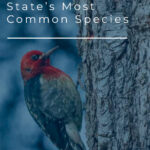 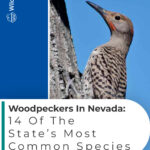 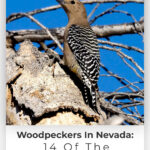 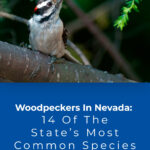 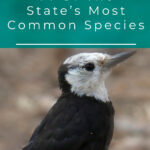 It shouldn’t surprise you to encounter a woodpecker at least once around Nevada, considering this Picidae family is widespread across the world’s woodlands. You’ll know if you stumble upon one of them because of their unique, wood-penetrating beaks.

They mostly spend their days noisily hammering away, which is why you’ll probably have no difficulty finding one. Since there are more than 250 bird species in this family, it’s no wonder that you can spot 14 species of woodpeckers in Nevada.

Interested to know how to identify the types you see? Read on to learn more!

Lewis’s woodpecker can be identified by its large, black-green body, red face, and pink belly, and its crow-like flight style. It was named after Meriwether Lewis of the famed Lewis and Clark duo.

Unlike many other species of woodpeckers, these birds rarely peck at trees. Instead, they opt to hunt for insects as they fly through the air. When insects aren’t readily available, they’ll eat acorns, fruits, and nuts.

Lewis’s woodpecker has rather nomadic traits, but during breeding season, you can find them in a few different locations, including pine forests, woodlands near water, and burned forests. The bird will likely be perched on bare trees, or sometimes in acorn crops or nearby residential areas.

Reminiscent of the Gila Monster in appearance, the Gila woodpecker is one of the more aggressive species of woodpeckers. These omnivorous birds primarily live in dry regions and rely on cacti as their main food source and nesting locations.

These gray-brown birds have black and white bars on their wings, back, and tail feathers, but if you can’t identify one of these birds by its appearance, use their distinctively loud calls to find them.

Unfortunately, the population of this species has seriously declined over the years, so while it’s not impossible to see one in Nevada, it’s a rarity. They are, however, still abundant in southern parts of Arizona.

Williamson’s sapsuckers are a species whose female’s appearance is so distinct from its male, they were initially thought to be two different birds, which might generate some confusion while you’re out birdwatching. Females have brownish heads, black and yellow-patched bellies, and striped wings, while the males have black silken plumage with white patches, red throats, and yellow bellies.

As their name implies, red-naped sapsuckers of course feed on sap, but these birds have a diverse diet, eating fruits and insects as well.

Keep an ear out for their unique drumming, but in case your strength does not lie in identification through sound, you’ll recognize these birds by their overall black and white coloration and red feathers on their caps, napes, and throats. Use the birds’ chins to distinguish the sexes; females have a white patch there while a male’s chin is entirely red.

You’ll more than likely spot these red-naped birds in the northern half of Nevada during breeding season, where they’ll be flitting about in willow, aspen, pine, juniper, or Douglas-fir forests.

With a head full of red feathers that bleed into their breasts, red-breasted sapsuckers have a feeding pattern typical of their fellow yellow-bellied and red-naped sapsuckers, drilling small holes in coniferous tree bark and feeding on the sticky sap that oozes out.

These birds mostly frequent the western United States, popping up in Nevada during the breeding season. This species is probably the least migratory of the sapsuckers, usually becoming permanent residents of the coast.

American three-toed woodpeckers are small, but don’t let their size fool you; these birds are strong. Thanks to its lack of a fourth toe — a physical trait also shared by Eurasian three-toed and black-backed woodpeckers — they can deliver especially powerful blows to the trees they drill into.

This woodpecker’s preferred habitat is dying or disturbed forests, so look for them among bark beetle-infested or recently burned areas. They horizontally peck on coniferous trees until they reveal the sap layer and insects, like caterpillars and the larvae of wood-boring beetles. They also have a distinctive drumming pattern that starts in swift moves and ends in slower ones.

Though these birds maintain their presence in Nevada year-round, they aren’t very easily spotted unless you’re in or around damaged woods.

Black-backed woodpeckers have a drumming style similar to their smaller sibling, the American three-toed woodpecker, and love to indulge in large larvae found in old, dead coniferous forests, especially those that have been recently burned.

These large birds are generally uncommon, so you won’t spot them hanging around your backyard feeders. Should you spot one of these birds while you’re out on a hike, however, you’ll know it by its black striped flanks and the yellow crown present on the males but absent from the females. These birds also have white undersides, but since they enjoy spending so much time in burned forests, their white feathers are almost always covered in soot.

This bird also manages to pack a mighty punch when drilling into trees, thanks to its lack of the fourth toe that the common woodpecker has.

Downies are the smallest and most common woodpecker species of North America. They’re easy to spot as they leap between delicate twigs and branches in woodlots, parks, and even residential areas.

These black and white birds have straight, chisel-like bills, wide shoulders, and straight-backed posture. These birds tend to have more acrobatic flight patterns than larger woodpecker species and like to make lots of noise, especially during the spring and summer months.

As far as the downy woodpecker’s diet is concerned, beetles, ants, and caterpillars make up the majority of their daily menu, but these birds will also snack on fruits, berries, and the contents of your backyard bird feeder, especially suet.

You can spot the small ladder-backed woodpeckers in barren drylands, where they feed on desert insects and cacti fruits. These birds are permanent residents of their range, which spans from the southern tip of Nevada to Nicaragua.

These birds are named after the black and white stripes on their backs; they’re so neat, they resemble the rungs of a ladder. They sport grayish feathers on their underparts, and while males have red crowns, those of females are black.

Occasionally, these birds hybridize with their closest relative, Nuttall’s woodpecker, but despite this, the two species are presumed to be rivals.

At first glance, one might mistake the hairy woodpecker for its downy cousin, but upon taking a closer look, you’ll likely notice that hairies are actually much larger than the downy woodpecker species! These birds not only look alike but act alike, too, generally preferring the same types of habitats. The hairy woodpecker, however, is a bit on the shyer side and is less likely to show up in residential areas.

These birds are quite fond of leftovers, and they’re known to follow bigger birds, especially sapsuckers, around and feed on whatever food is left behind.

These birds are found in most parts of Nevada all year long, and you’ll recognize them by their long, thorn-like bills.

With white heads starkly contradicting their black bodies, white-headed woodpeckers are easily identifiable, especially if you’re around mountainous pinelands, where they feed on big pine seeds by peeling off bark quietly.

In addition to pine seeds, this woodpecker species will chow down on insects like wood-boring beetles, ants, and spiders, and it will probably stop by your house for a meal or two if you’ve got a bird feeder filled with suet.

Northern flickers have mesmerizing plumage, with mostly brown feathers marked by curved, inky black accents. Two subspecies of these flickers exist — red-shafted and yellow-shafted — and they’re named for the flashes of colors visible on their wings and tails.

Though the gilded flicker is most commonly spotted in Arizona, every once in a while, a lucky birdwatcher will spot one of these little beauties in the southern tip of Nevada. It’s a common resident of the Sonoran Desert, residing in saguaro cacti.

When it comes to appearance, the gilded flicker boasts features and color patterns of both the red and yellow-shafted northern flickers, but when comparing the sizes of these birds, the gilded flicker is smaller. Just like their flicker cousins, though, these birds will also flit about on the ground looking for ants to eat.

Known to take habitat in deciduous forests with varied foliage, pileated woodpeckers are the largest species of woodpeckers and the most distinct in looks. These mostly black birds have white stripes on their faces and a crimson red crest.

They can mainly be found drumming near tree bottoms in mature forests, drumming their signature rectangular holes in the bark as they search for carpenter ants. These birds are a bit harder to spot in most parts of the state, however, they have been known to frequent areas around Lake Tahoe, which straddles the border of Nevada and California.

Make sure you look closely at the differences between each of these 14 types of woodpeckers. These fascinating birds don’t only differ in appearance, but also food foraging habits.

Mainly, woodlands and forests are your best bets for finding these creatures, so keep your eyes and ears sharp when you’re out hiking wooded trails!