Woodpeckers In Nebraska: Try To Find All 13 Species 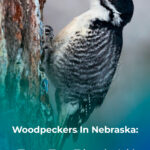 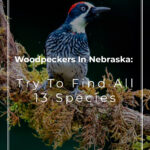 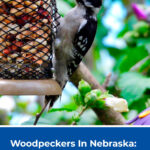 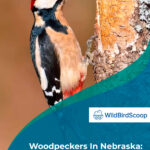 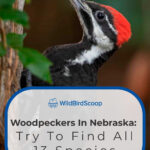 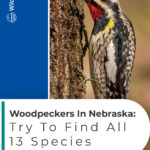 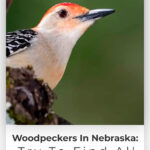 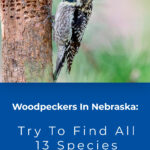 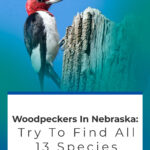 The state of Nebraska is known for its vast outdoors. This makes it a habitat to 13 known species of woodpeckers, four of which are permanent state residents. Others are reported to migrate during different seasons.

Spotting woodpeckers in Nebraska can be easy if you know where to look. In this article, we’ll look at all 13 species of woodpeckers observed in Nebraska and where you can find them.

Lewis’s woodpecker is easy to spot, thanks to its blush-red face, silverish dark green body, gray collar, and pink belly. You can find them in Nebraska mostly during the fall and winter, sometimes during the springtime, but less often in summer. These peckers prefer forested areas, so you’ll likely catch them in Nebraska’s Pine Ridge region.

This bird likes to catch its prey mid-air like a flycatcher, so it’s common for it to perch upright in trees as it waits for its next meal to come along. When it’s not snatching insects, Lewis’s woodpecker will also make a meal of fruits, berries, acorns, and other nuts.

As its name implies, the red-headed woodpecker has a distinctive flaming-red head, as well as a black back, and a white underbelly. Its wings are black with a white underwing, which is strikingly visible when in flight.

These birds like open forests and are more common in the northern parts of Nebraska. They’re residents of the state during the summer months, and migrants in the fall and spring seasons. While the red-headed woodpecker used to be among the most commonly sighted North American birds, their population is currently rare in many regions.

These birds might be the most omnivorous woodpecker species, eating insects, spiders, earthworms, seeds, berries, and the occasional small rodent or nestling of another bird species.

The clown-faced acorn woodpecker has a bright red crown, a pale yellow throat, and a white underbelly speckled with black. Its back, wings, and tail feathers are black. Note that females of this species have smaller bills and white feathers on their wings and hinds that are visible when they’re flying.

These birds are quite unusual for woodpeckers, hoarding large amounts of acorns in tree cavities and hanging out in large groups. These woodpeckers can mostly be found in Nebraska’s oak forest areas, but you can also find them in pine woodlands and forests.

The red-bellied woodpecker has a red nape and a reddish-white underbelly, which serves as the inspiration for its name. Unfortunately, the red-tinted feathers on its stomach are kind of hard to spot, so they aren’t the most efficient form of identification for this bird. Instead, note its black and white-speckled back and wings. The male of the species also has a bright red crown, which is another easy way to spot these birds. Just be careful not to confuse them with the red-headed species.

Red-bellied woodpeckers are year-round residents of Nebraska that can mostly be seen in the eastern parts of the state. They prefer to spend time in open forests, orchards, urban parks, and around rivers, usually looking for insects, fish, small bird eggs, tree frogs, and sap to eat.

Male and female Williamson’s sapsuckers have quite different physical features. Males have red napes, and black and white outlined yellowish bellies. Their heads, chest, and backs are black and wings and hind are white.

Females, on the other hand, have brown heads, and white and brown striped backs, flanks, and wings. They sport black chests, yellow bellies, and white rumps.

Williamson’s sapsuckers inhabit mostly dry areas, so you may not regularly find them in Nebraska, but if you do encounter them, it’ll probably be in ponderosa pine areas or cone forests during springtime in the state.

Yellow-bellied sapsuckers have red foreheads, and, as you probably already guessed by their names, yellowish bellies. They also have white wing patches and long black and white stripes that go from their faces down their backs. Males have red neck feathers.

These migratory sapsuckers migrate to the eastern part of the United States during the winter and like to inhabit woodlands that are populated with aspens and poplars.

The downy woodpecker is checkered black and white across the face, back, and wings, and wears white feathers on its belly. The male of the species has a red spot on its crown that is very distinguishable.

These birds make themselves at home nearly anywhere trees are present. You’ll find them in open woodlands, orchards, city parks, or empty lots. Downies forage on limbs and branches, looking for beetles, ants, wasps, and caterpillars, and if insects are not readily available, they’ll make a meal of seeds and nuts.

A permanent resident of Nebraska, the downy woodpecker can be found in dense forests and parks across the state all year round, and if you put out a suet feeder, you just might spot one of these friendly birds in your backyard.

Physically, the hairy woodpecker is similar to the downy woodpecker, as the two species share the same black and white checkered pattern. The main difference between the two, however, is the size of their bills; the hairies have bigger ones.

You can spot the hairy woodpecker all year round in Nebraska, mostly in cone forests and around wetlands, as they hunt for wood-boring beetle larvae, ants, and caterpillars. They’ll also eat berries and seeds.

Though these birds look and behave like their smaller downy cousins, the hairy woodpecker is less commonly spotted. However, they make occasional visits to backyard bird feeders, so keep your eyes open and listen carefully for their whinnying calls.

You can find two northern flicker subspecies in Nebraska: yellow-shafted and red-shafted. Both are brownish beige with a dark speckled pattern covering their bodies, with their differences in color lining their underwings and tails. Males have a stripe of red feathers above their beaks, and yellow-shafted males also sport red spots on their heads.

The yellow-shafted northern flicker is more commonly seen in the eastern parts of the state, while the red-shafted one inhabits the far western areas. They can be found all year round in open habitats such as woodlots, parks, and orchards.

You’ll probably recognize this bird if you watched the Woody Woodpecker cartoon as a child. The pileated woodpecker inspired Woody and is all black with a flaming red crest. This relatively large woodpecker has some white on its throat, underwings, and flanks, as well as around the eyes. Males of this species have red mustaches.

Sightings of this large woodpecker are quite limited in Nebraska lately, and it’s presumed they no longer frequent the state. If you do spot one of these birds, however, it’ll be around mature or river bottom forests in some eastern parts of the state.

The American three-toed woodpecker has a black head, wings, hind and tail, a black and white face, and a white underbelly. Its back and flanks have black and white barring, and the males have a yellow cap.

As one of two three-toed woodpeckers found in Nebraska, this bird prefers to spend its time in burned cone forests. There hasn’t been a reported sighting since the early 1900s, but you just might be lucky enough to find one of these birds if you visit their preferred habitat.

While these birds mostly consume insects, fruits, and seeds, they’ll occasionally stop by a sapsucker’s well and feed on the sap that was left behind.

It also has two white stripes on its head, one around the eyes and one at the mustache area. Males sport a yellow patch on their crown

Unfortunately, there haven’t been many recorded sightings since the 1970s of this woodpecker in Nebraska, which makes sense considering these birds are generally uncommon. However, if you do spot one it’ll be around coniferous forests, or recently burned forest areas.

The red-naped sapsucker is not a frequent Nebraska visitor or permanent resident of the state, but you might find this bird around deciduous forest areas across the state looking for tree sap, insects, or fruit to eat.

These woodpeckers have red napes, throats, and foreheads, as well as barred backs, yellowish underbellies, and white feathers on their wings. The female red-naped sapsucker, however, has a less reddish nape than the male of the species.

Woodpeckers aren’t in short supply in Nebraska. However, due to climate change and the eradication of some natural habitats that these birds prefer, you may be seeing less and less of them in the coming years. The red-headed woodpecker, for example, who is one of the state’s summer visitors, has been affected by these changes.

Nevertheless, you can still easily spot permanent woodpecker residents around Nebraska’s forests and riverbeds. So, if you find yourself in the Cornhusker State, make sure you bring a pair of binoculars and a good field guide and see how many of these wonderful birds you can identify.