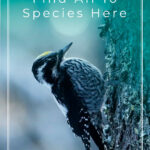 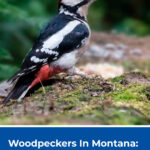 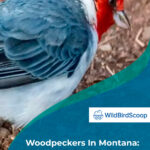 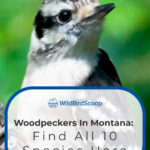 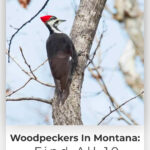 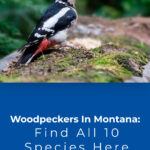 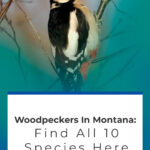 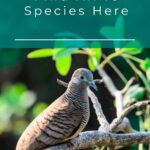 Woodpeckers tend to make their homes in timberlands, forests, backyards — anywhere trees are readily accessible. Luckily for these winged animals, Montana boasts plenty of natural spaces, including Bitterroot and Flathead National forests, which they can claim as home.

Ten different woodpecker species can be spotted in the Treasure State, and with a bit of patience and a good field guide, you just might find all of them. Read on to learn how to identify these intriguing birds.

Red-naped sapsuckers were thought to be a subspecies of the yellow-bellied sapsucker because they look extremely similar to each other. It was only in 1983 when researchers found they were a distinct species.

These industrious woodpeckers drill neat rows of holes in willow, aspen, and birch to lap up the tasty, sugary sap that flows out. Their tongues, which are shorter than those of common woodpeckers, are equipped with small, hairlike projections to help them better hold onto the sweet, sticky liquid.

Although these sapsuckers drill hundreds of tiny holes in tree bark, most of the trees survive without any issues. This means that these red-naped sapsuckers aren’t an immediate danger to most backyard trees. Furthermore, the holes they make create homes for other species, including chickadees, mountain bluebirds, and nuthatches.

This woodpecker is native to North America and spends its days in the western mountains. This small, unobtrusive bird feeds on insect populations found in newly burned, bark beetle-infested, or similarly disturbed areas.

Unlike typical woodpecker species, the American three-toed woodpecker forages by flaking, or scaling, bark from tree trunks until it falls away rather than digging deep into the wood. They feed on insect larvae and the sap-rich tissue that lies underneath.

Despite the American three-toed bird’s small stature, they’re deceptively powerful and arguably stronger than similar-sized woodpeckers. Research suggests that this strength is due to the evolutionary loss of the fourth toe, allowing them to lean farther away from the tree and causing them to hit the wood harder than other woodpeckers can.

Black-backed woodpeckers, also widely known in the United States as the Arctic three-toed woodpecker, is a medium-sized bird with an extremely powerful bill. They’re inky, black birds that have a single white stripe on either of their cheeks and black barring on the flanks.

These birds forage in dead, burned trees, and similar dying wood bark, excavating deep into the trunks to feed on wood-boring beetle larvae. Compared to most woodpeckers, black-backed woodpeckers spend long periods of time in a single spot.

Similar to American three-toed woodpeckers, they, too, have only three toes on each foot and can also deliver remarkably strong blows to trees.

Hairy woodpeckers are medium-sized birds with long tails and straight bills that are as long as their heads. Their backs are black with a white stripe down the center, and they have a red patch at the rear of their heads.

When it comes to feeding, hairy woodpeckers are opportunistic. Although they mostly consume spiders, beetles, fruits, nuts, and seeds, they sometimes drink sap leaking from sap wells dug by sapsuckers. When they aren’t looting for leftovers, you’ll sometimes find them feeding at the bases of trees, atop falling logs, and even on the ground searching for crawly insects to eat.

The smallest and the most recognizable woodpecker species found in Montana is the downy woodpecker. This bird is similar to the hairy woodpecker in many ways, primarily feeding pattern and looks. Regardless, they do have a few differences.

The downy woodpecker’s black spots on its white tail feathers and shorter bill distinguish it from the hairy woodpecker, and downies are much more acrobatic while in flight due to their smaller statures. Though they’re smaller, downy woodpeckers are extremely loud — way more so than their bigger cousins!

Lewis’s woodpeckers have an astonishing color scheme, complete with gleaming green backs, gray collars, red faces, and pink tinted feathers on their stomachs. From a distance, these birds look dark and crow-like. These woodpeckers are monomorphic, which means both males and females look alike. Juveniles have dim dark green backs with an earthy colored head and no gray collars or red faces.

Named after Meriwether Lewis, who first described these birds during the Lewis and Clark expedition, Lewis’s woodpecker gets the vast majority of its food by catching its prey mid-air. In the fall, these birds chop nuts into pieces and stock up for the cold winter months by storing their gatherings in tree cavities for safekeeping. They guard these sites throughout the winter season.

Northern flickers are members of the woodpecker family who are famous for the splendid yellow or red feathers found on the undersides of their wings and tails. This coloration causes them to look like glimmering flames when they fly, but overall, these birds appear brownish in color when they perch on trees.

Similar to the aforementioned hairy woodpecker, northern flickers spend most of their time on the ground in search of bugs, ants, and worms to eat. They’re often found in open habitats near trees, including parks, yards, edges, and, of course, woodlands.

Males and females of the medium-sized Williamson’s sapsucker species look nothing alike. In fact, it wasn’t until 1873 that ornithologists realized they belonged to the same species!

Males have a dark back, a white rump, a bright red chin, and a yellow belly. Females have a bright yellow midsection and a brown-colored head. Additionally, their backs, wings, and sides have dark brown and white coloring.

Like any other sapsucker, Williamson’s sapsuckers forage by drilling small, shallow sap wells into cone-bearing, evergreen trees. Then, they eat the sap, the inner bark, and any insect that becomes trapped in the sticky liquid.

You might say the red-headed woodpecker is an inspirational creature, as it was these birds that led ornithologist Alexander Wilson to discover his passion and interest for wild birds during the 1700s. Though they’re named after their crimson-colored heads, their white body and half black, half white wings have earned them the nickname “flying checkerboard.”

The red-headed woodpecker doesn’t drill into trees to gather insects as frequently as other woodpecker species do. Instead, it sits on a tree branch or fence post and waits to snatch its prey as it flies through the air, or it forages on the ground for food. These birds eat spiders, worms, and other insects, as well as seeds, nuts, fruit, small birds, mice, and bird eggs.

The pileated woodpecker is said to be the largest common woodpecker in the United States, and its long, chisel-like bill and wide wings make it seem crow-like while it’s in flight. Like many of the other species on this list, pileated woodpeckers are mostly black and white. They have a flaming red crest, and males can be recognized by the red stripe across their cheeks. These birds’ stunning appearance is what inspired the 1940 design of Woody Woodpecker!

It’s fairly easy to know when pileated woodpeckers are around because they drill distinctive rectangular-shaped holes in rotten wood to feed on carpenter ants and similar insects. They’re quite loud, as well, with shrill, whinnying calls and a deep, slow, rolling pattern as they drum on tree trunks.

Pileated woodpeckers are forest birds, so you’ll often find them in large, standing dead trees and downed wood. They also visit backyard bird feeders to munch on suet and forage on dead or dying trees on your property.

If you live in or near a wooded area in Montana, you’re probably already familiar with the woodpecker’s rhythmic drumming. Those who don’t pay attention may believe that all woodpeckers sound and look alike, but the truth is, they’re all unique.

Woodpeckers are truly fascinating creatures. If you want to lure a woodpecker to your backyard, simply set up a bird feeder filled with suet. With enough luck, you’ll be able to observe them up close.

Interested to know more about woodpeckers? Check out our list of the 12 species you have to see in Kansas!