Woodpeckers In California: Look Out For All 14 Species 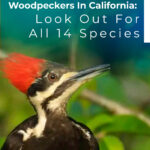 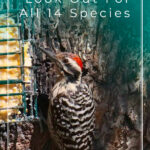 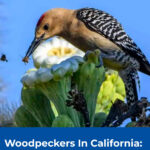 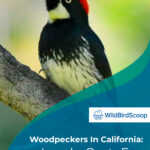 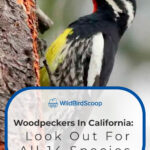 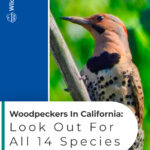 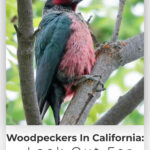 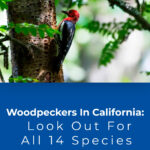 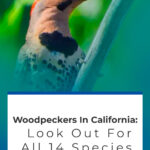 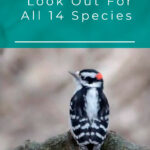 Stretching from the Mexican borders in the south to the State of Oregon in the North, California is home to 450 different bird species. There are several attractive parks, in addition to the Giant Redwoods that would definitely attract the attention of birds.

Woodpeckers are quite common in California and are likely to be seen all around the state. Although most nature lovers are in love with the attractive and active birds, some Californians are fed up with the continuous drumming and calling.

There are currently 14 species of woodpeckers living in California, and in this article, we’ll talk about the best ways to identify them all.

The acorn woodpecker is a medium-sized bird with an almost all-black body, except for its white forehead, throat, and belly. Its eyes are white, and males have a red patch on the forehead, while females have a black spot between the cap and the forehead. You might hear this bird before you see it, as it has a very distinctive call that sounds like it’s laughing.

Just like the name implies, acorn woodpeckers feed mainly on acorns. In some cases, the birds dig dead trees to create granaries to store acorns. Because they store thousands of them, one bird is always responsible for alerting the group in case a thief is trying to steal the stored acorns. They also occasionally feed on insects, fruit, and sap.

Due to their limited territories, birds usually engage in cooperative breeding, as this will guarantee the survival of the biggest percentage of the offspring. Most nests are made of 3 males and 2 females, but they may contain up to 7 males and 3 females.

Named after naturalist Thomas Nuttall, this bird has black wings with white horizontal lines. Males look different from the females, as they have a red patch on the forehead, which is absent in adult females but found in juveniles of both sexes.

This bird is strictly found in northern California, sometimes extending to the northern borders of Baja California in the south. It prefers to live among dead oak trees, where it forages for click beetle larvae, wood borers, and ants. Occasionally, it will visit sap wells dug by red-breasted sapsuckers to lick up sticky sap.

Despite its restricted habitat, it’s not considered to be threatened, with a population of more than 100,000 individuals. These birds usually circle around the branches of willows and oaks, so if you can find an oak tree in California, you will most likely find Nutall’s woodpecker.

The Gila woodpecker has a grayish-brown body with black and white marked wings. Males of this species are easily recognized, thanks to a bright red patch of feathers on their crowns.

Your chances of spotting one of these birds are higher in the morning or late afternoon, as it’s during these times of the day when this bird goes looking for food in tall trees and saguaro cacti. During the heat of the day, find the Gila woodpecker resting or feeding in shaded vegetation.

Although the Gila woodpecker mainly feeds on larvae, it also feeds on nectar, fruits, seeds, worms, and eggs. It might even feed on lizards and the young chicks of other birds, and if you have a hummingbird feeder, this bird just may come and feed on the nectar.

One of the smallest woodpecker species, the downy woodpecker, sports a black back and white underside, and though it looks almost identical to the hairy woodpecker, you can tell the two apart by their outer feathers. Those of the hairy woodpecker are pure white, and downy’s have gray spots on them. The males can be distinguished from the females by a red feather patch on the back of the bird’s head.

The downy woodpecker flies up and down, letting out loud calls. When it lands on a tree branch, it will drum continuously, although the pattern is slow compared to other woodpeckers.

This bird is widespread in California and can be seen in backyards and national parks as it likes to dig the bark of dead trees to look for larvae. It also feeds on dangerous pests that destroy crops, so people usually put up with its calls because it saves millions of crops. When there are no larvae to be found, downies will feed on berries, grapes, cherries, grains, and seeds. They may also visit your backyard if you have a feeder.

The hairy woodpecker can be found in most parts of California all year-round, and as long as there are large trees around, this black and white bird is happy. Be careful not to confuse it with the downy woodpecker though; despite their differences in size, these birds look and act alike.

Hairies, however, are a bit less social than their smaller downy cousins, but if you set out a feeder filled with suet, they just may show up in your backyard.

These medium-sized woodpeckers mostly eat beetle larvae, but every once in a while, you can find the hairy woodpecker flying after another species and eating its leftovers.

Do you think the pileated woodpecker looks familiar? That’s because this large bird served as the inspiration for Woody Woodpecker, so if you’re a fan of cartoons, you’ve definitely seen it before. This bird can be found in California’s open pine forests, and you’ll recognize it by its mostly black body, crimson crest, and white stripes running down its neck.

Appearance isn’t the only thing that sets the pileated woodpecker apart, however. The rectangle-shaped holes it drills into trees as it digs for carpenter ants are a common calling card for these birds.

Ladder-backed woodpeckers frequent California’s southern tip, as they’re attracted to desert scrub and arid environments. These birds used to be known as cactus woodpeckers, which makes sense, considering their affinity for the thorny plants.

This species gets its name from the white stripes across its black-feathered back, as they look a bit like the rungs of a ladder. Their wings look more checkered than striped, and they sport grayish feathers on their bellies. You’ll know the males from the females by the red crowns they have; females, on the other hand, have black crowns.

Gilded flickers look a lot like their northern flicker cousins, sharing physical characteristics of both the red and yellow-shafted subspecies. This bird frequents the Sonoran Desert, flitting about in the saguaro cactus forests. It’s not uncommon for gilded and red-shafted flickers to breed with one another, creating a flicker hybrid that dominates the area in the summer months.

These brownish birds mostly eat ants and other insects, and enjoy foraging on the ground, on tree trunks, and cacti, and will occasionally catch insects mid-air.

The northern flicker can be found in many wooded areas across North America all year long, including the majority of the state of California. These large brownish woodpeckers have black-scalloped feathers and a flash of color on their wings and tails — red or yellow, depending on the subspecies.

When you’re on the hunt for a northern flicker, it’s best to keep your eyes to the ground rather than toward the trees. Sure, these birds climb tree trunks and limbs like other woodpeckers, but these birds actually prefer to forage on the ground. This is because ants make up the majority of their diet, and the flicker uses its long, barbed tongue to lap them into its mouth.

Spotting Williamson’s sapsucker in California isn’t impossible, but it will require lots of patience, as these relatively quiet birds keep to themselves much of the time. You’ll have better luck catching a glimpse of these beauties if you’re in a mature coniferous forest, where they’ll likely be digging sap wells.

Of course, this species feeds on sticky sap, but they’ll also eat insects, fruit, and berries.

Male and female Williamson’s sapsuckers look quite different from one another, so much so that early ornithologists initially thought they belonged to different species. Males have inky black bodies, white wing patches, and yellow bellies, while females have black and white banded bodies, brown heads, yellow bellies, and white rumps.

The red-breasted sapsucker is a common resident of the Pacific Coast’s coniferous forests, so if you find yourself in the Golden State, your chances of spotting this medium-sized woodpecker are pretty high.

This bird is very closely related to the yellow-bellied and red-naped species and is the least migratory sapsucker; you’ll find it around parts of California all year-round. Just like other sapsuckers, the red-breasted bird drills tiny holes in tree bark to lick up the sap, and hummingbirds tend to use their wells after they leave.

If you find yourself in one of California’s mountain pine forests in the spring, it probably won’t be long before you hear the white-headed woodpecker drumming. They’re not as noisy as other species, though, so you’ll need to listen closely.

These medium-sized woodpeckers are mostly black, except for their white heads and edges of their outer feathers. Males and juveniles are also marked by red feathers on their crowns.

These quiet birds mostly eat insects and pine seeds, and they forage by flaking away bits of bark from trees, so even when hunting for food, they don’t make many sounds. They also eat sap, digging neat rows of holes just like a sapsucker, wood-boring beetles, and ants.

These birds were first identified by Meriwether Lewis of the famed Lewis and Clark duo, which is where the species got its name from. The explorer likely first noticed the bird’s unique color pattern, and you will, too; its pink belly, gray collar, red face, and dark green back are hard to miss.

Or, instead of appearance, maybe you’ll first notice their unique and unpredictable flight patterns. They aren’t very vocal, though, so you’ll need to keep a careful eye out if you hope to see one.

Unlike other woodpeckers, this bird rarely digs into trees to find food. Instead, it prefers to snatch its prey right out of the air, just like a flycatcher.

We hate to be the bearers of bad news, but unless you’re around a recently burned forest area in California, your chances of seeing the black-backed woodpecker are pretty slim. While these birds aren’t exactly quiet, they are somewhat mysterious, usually only appearing when there’s burned wood nearby.

There is good news, though: once these birds show up, they’re likely to stay for a long time, sometimes up to eight years, feeding on the beetle larvae they find.

The black-backed woodpecker, also called the Arctic three-toed woodpecker, is mostly black, except for its white undersides, white mustache, and yellow crown on males.

Woodpeckers can be found among the national parks as well as the deserts in California. You can find a lot of woodpeckers in California, and you may even attract one or two of them to your backyard using feeders.

Although some people are annoyed by the continuous calls and drumming of woodpeckers, to bird lovers, visiting California and studying its versatile bird species would be a dream come true. Keep an eye on dead trees, and you’re likely to see a busy woodpecker at work.