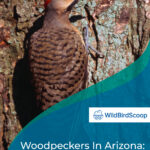 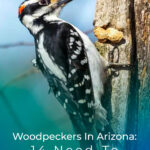 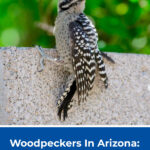 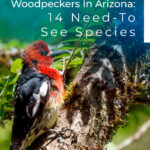 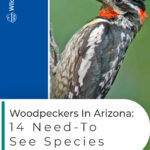 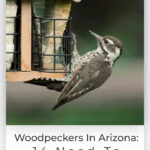 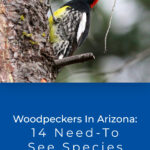 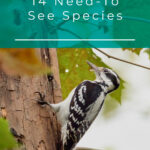 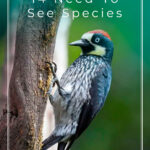 Arizona is a big state with varying geography, contrasting elevations with mountains and canyons, and a wildly differing climate. You could find snow in the ski resorts of Tucson, forests in Northern Arizona, and a scalding desert as you get closer to Nevada.

This state is also home to national forests, parks, and preserves. This makes Arizona one of the most appealing bird watching locations in the United States. There are about 14 species of woodpeckers in Arizona, all of them worth following. But that would take some traveling around.

We rounded up a list of the most commonly spotted woodpeckers in Arizona, as well as how to identify them easily, and what their behaviors are like.

The acorn woodpecker is a medium-sized bird with an eye-catching appearance and a highly intriguing social life. They live in the open woodlands and mostly feed on insects.

They have dark heads, backs, and tails that contrasts with some white patches on their foreheads, under their beaks, and around their sides. If you look closely at the feathers on their backs, you’ll notice a few aquamarine touches. As for the distinctive features of the males, there’s a bright red cap that’s quite easy to spot.

Acorn woodpeckers, as the name implies, are obsessed with collecting and storing acorns. They carve out cavities in trees and stash their gains, or simply use any available space they can find. Even man-made structures are fair game for them.

These sociable birds are known to raise their baby birds in groups of care-takers. This behavior is peculiar for woodpeckers, and it contrasts sharply with other birds who prefer smaller family units.

Some sources describe the appearance of Gila woodpeckers as ‘bland’. However, we’ve seen it up close, and its looks are definitely remarkable. The black and white pattern on its wings, back, and tail is its trademark, and males have one more identifying feature, which is the red cap at the top of its head.

These birds have a voracious appetite, and they don’t mind spending the whole day foraging for food. They prefer insects most, and they look for them in branches and trunks. Gila woodpeckers live around saguaro cactus, with fewer birds taking residence in desert scrub, arroyos and washes, and even in small towns.

The red-breasted sapsucker is medium-sized, with the male and female looking rather similar. It’s characterized by a bright red head and breast and a white stripe running on both sides of its dark back.

There are two basic species of sapsuckers, one that favors the colder climate of the north, with the other, including this one, spending part of its time in the south. It’s an insect eater that forages on tree bark, then nests in tree cavities when the day is done.

Ladder-backed woodpeckers have a highly distinctive feature, which is their stiff tales. They actually use it for support, and it’s not uncommon to see them leaning on their tails like a kickstand while perching on a branch.

The other special marking they have is the black and white pattern on their backs and wings. It’s said that it looks like the rungs of a ladder, but if you can’t see the similarity right away, you’re not alone. Still, you can’t miss the stark markings. Both sexes share the same smallish, slightly asymmetric shape, and chisel-like straight beaks. Males have reddish crowns, while the females have dark crowns.

The ladder-backed woodpecker takes residence in the southern areas all the way down to Nicaragua and could be found there all year-round. It doesn’t exhibit migratory tendencies at all, and it will stay put as long as its habitat stays intact. These woodpeckers are adept at living well in the desert. They’re agile and well versed in foraging around the thorns of cactuses. These birds are fast-moving and tend to keep to themselves, so it might be a bit difficult to spot one of them.

This woodpecker is among the largest in its peer group. Lewis’s woodpecker is a seasonal visitor that likes to spend its summers in Canada, and the winters around the southern borders, all the way down to Mexico.

You’ll also identify this bird by its tendency to dwell around open spaces. This is a characteristic of several species that take to the desert, but most woodpeckers prefer dense foliage. Lewis’s woodpecker is a highlighter that enjoys gliding and effortless flying, and it forages while doing its rounds around the tallest trees it could find.

Though there are two northern flicker subspecies, red and yellow-shafted, it’s the red-shafted flicker that you’ll see making its territory in Arizona. These birds can be identified by the flecks of red in their wing and tail feathers, and by their unique foraging habits; while most woodpeckers find most of their food while perched in tree branches, northern flickers spend most of their time hunting for food on the ground.

These birds eat lots of ants, probably more than any other North American bird, but when fall and wintertime roll around, their diet shifts, and they primarily eat fruits and berries.

This woodpecker species is basically exclusive to Arizona, making its home in the saguaro cactus forests in the Sonoran Desert. These birds look a lot like their northern flicker cousins, and their appearance is a combination of traits from both the red and yellow-shafted subspecies.

These grayish-brown birds like to forage on the ground as well, looking for ants, beetles, and termites to eat. When they aren’t hopping around in the grass and dirt, they hunt like flycatchers, flying out to catch their prey in the air.

Despite the name of this species, these woodpeckers only maintain a consistent presence in the southeastern portion of the state, spending most of their time in mountains near the Mexican border. This bird’s behavior has been said to mimic that of the hairy woodpecker, except this species is quieter and does not dig into trees as deeply as hairies do.

Arizona woodpeckers have solid brown backs with a large patch of white feathers on their cheeks. The spots on their undersides make them stand out from other American woodpeckers, as they’re the only species that boast this physical characteristic. Identify the males by the bright red dot on the backs of their heads.

It’ll take a lot of patience and a little luck to spot the American three-toed woodpecker in Arizona, as these somewhat shy and unobtrusive birds tend to keep to themselves…at least until a forest is burned, infested by insects, or otherwise damaged — then, these woodpeckers flock to the area.

The black and white bird mostly eats wood-boring beetle larvae, but it will also make a meal out of fruit or tree sap.

These birds may be small, but don’t let that fool you; they’re strong enough to deliver particularly powerful blows to the trees they perch on. This is because they lack the fourth toe that most woodpeckers have, which means they can lean farther away from the tree before they strike.

The odds are pretty high that you’ve seen a downy woodpecker before, as this species is one of the most common found in the United States. The small black and white bird can live almost anywhere, from open woodlands to residential areas or city parks.

These friendly birds are likely to visit your backyard, especially if you hang a feeder full of suet, black oil sunflower seeds, or millet. When in their natural habitat, however, these small birds will forage for insects, especially ants and beetles.

The hairy woodpecker is the downy’s larger, lookalike cousin. Though both black and white birds are remarkably similar in appearance, hairies are bigger overall and have larger bills.

These birds like to hunt for food at the bases of trees, scavenging mostly for beetle larvae, ants, and caterpillars. But sometimes, when it comes to finding food, these robin-sized birds prefer to let others do all the work. They often follow other species around as they forage, taking their leftovers.

Like any other sapsucker, this species drills neat rows of shallow holes into coniferous trees to make a meal of the sticky, sugary sap. But when it would rather eat insects, Williamson’s sapsucker tends to snatch its insect prey from mid-air or forage on the ground.

You’ll recognize these sapsuckers by their black bodies, red throats, and yellow bellies. But if you’re not having any luck spotting these birds, try listening for them instead. They’re also recognizable by their raptor-like calls and erratic drumming patterns.

The red-naped sapsucker is a close relative of the yellow-bellied species. In fact, it was considered a subspecies for the majority of the 20th century.

These medium-sized birds have black-feathered bodies, a white stripe across their wings, and a black strip of feathers running through their eyes. You can distinguish the males from the females by looking at their chins; females have white ones, while males’ chins are red.

Find these birds in Arizona mostly during the winter, spending time in oak or pine-oak woods.

Though it can be spotted in this region of the United States, the yellow-bellied sapsucker is a rare find in Arizona, and if you do come across one, it’ll likely be in the winter.

These small sapsuckers are clothed in mostly black and white feathers, and while both sexes have red foreheads, only males have red throats. They, of course, sport a patch of yellowish feathers on their underparts, but it’s a bit difficult to spot unless you’re up close.

Find the yellow-bellied sapsucker digging neat rows of tiny holes in coniferous trees and using their tongues to lap up the sap.

Arizona’s wildlife is exceptional. If you live around this state, you’re lucky, and you should definitely explore every inch of it. If you’re just passing through but would like to see what the woodpeckers are up to, then you can head to Ramsey Canyon Preserve in Hereford. There, you can spot some rare birds, including the famous Arizona woodpecker.

We hope this round-up left you well acquainted with these interesting birds. Maybe on your next birdwatching trip in Arizona, you’ll see them all!