Woodpeckers In Alaska: See All 7 Species In This State! 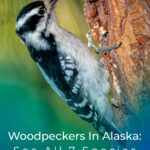 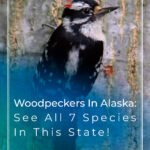 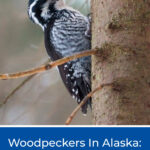 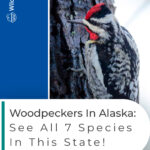 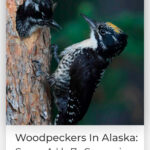 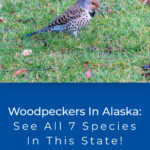 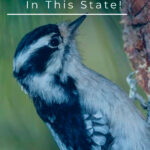 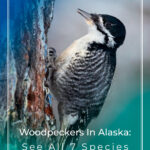 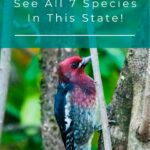 With almost 500 species of birds in the state of Alaska, bird lovers have a lot to look forward to. Nowadays, exploring the mountains, lodges, and glaciers is so much easier than it used to be in the past, and this means that you have a great chance to see the woodpeckers in Alaska.

Alaska is famous for its enormous water bodies that are fed by the glaciers every year, but it’s home to 2 of the largest forests in the United States. The Tongass and Chugach national forests are home to hundreds of trees where you’re likely to find woodpeckers.

There are 7 species of woodpeckers in Alaska, and in this article, we’ll give you the lowdown on all of them.

One of the smallest woodpecker species, the downy woodpecker, has a black body and white back, belly, and throat. It also has white spots on its wings and a bill that usually shorter than the length of its head. Adult males have an eye-catching red patch on the back of their heads while younger birds have red caps.

Downy woodpeckers become quite noisy, especially around springtime, where they make their pik-like calls with half a second between piks. Compared to other woodpeckers, these birds’ drumming patterns are rather slow, and their flying style is more acrobatic and they rise and fall in the air.

It’s easy to see this bird around brushy or weedy edges, in parks, backyards, and vacant lots. It feeds on caterpillars, beetle larvae, and ants. It also eats pests like corn earworms, apple borers, and bark beetles.

The bird also feeds on vegetables and plants, including grains and berries. If you have a bird feeder, fill it with black oil sunflower seeds, and you just might see a downy or two flying in for a quick snack.

Also known as the Arctic three-toed woodpecker, this medium-sized bird has a rather powerful bill. It’s usually found in burnt forests where it will feed mostly on wood-boring beetles. Once this bird establishes itself in a spot, it will continue nesting in the same burned forest until the insects’ population has declined; it can even be present among burned trees for up to 8 years after the fire!

The black-backed woodpecker has a solid black back and a belly that’s white with black feathers on its flanks. Because it feeds mostly in burned trees, its white spot will usually be gray, as it’s covered in soot. Males usually have a distinctive yellow patch on the crown, which is also present in younger birds of both sexes. However, this patch is missing in adult females.

In areas where wildfires aren’t that common, these birds are attracted to dead fir, hemlock, white cedar, and spruce trees.

The relatively large northern flicker has a slightly curved bill, and adults of this species have brownish bodies with black bars on their backs and wings. There are two subspecies of these flickers: yellow-shafted, who have flecks of yellow on the underside of the tail and wings, and red-shafted, who sport red feathers under their wings and tails instead. Red-shafted birds are found in the west, and yellow-shafted flickers prefer the eastern region.

Although you can see this bird in different states, the largest ones are found in Alaska. Unlike other woodpeckers, these birds usually spend most of their time on horizontal branches, but they also like to feed on the ground among other birds like sparrows, which is uncommon among other woodpecker species.

Northern flickers like to drum on trees or metal objects to mark their territories, and for the sake of self-defense, they try to make as much noise as possible.

The Northern Flicker mainly feeds on insects, but it also likes to feed on poison oak and ivy, nuts, grapes, wild cherry, grains, berries, and sunflower seeds, especially in winter. It will also occasionally feed on butterflies, flies, snails, and moths. They break into underground ant colonies and feed on the larvae, hammering the ground the same way other woodpeckers hammer the bark on trees.

The novice birdwatcher will probably mistake the hairy woodpecker for a member of the downy species, but with such similar physical characteristics, it’s not hard to understand why. Both species have the same black and white color scheme, but it’s the size of these birds that set these woodpeckers apart. Hairy woodpeckers are larger than their downy cousins, and their bills are larger.

These birds adapt to almost any environment where mature forests are present, which is why they’re among the most commonly spotted woodpecker species in North America. They’ll even show up at your backyard bird feeder if you put out suet, peanuts, or black oil sunflower seeds.

When it’s time to eat, the hairy woodpecker forages for insects, but it’ll also follow other species, like the pileated woodpecker, and feed on whatever is left behind.

Records reveal that the yellow-bellied sapsucker has only been spotted a handful of times in the Last Frontier, but if you find yourself in a hardwood or conifer forest, look up; these mostly black and white birds like to forage at high elevations.

As indicated by their name, yellow-bellied sapsuckers drill neat rows of tiny holes in trees and lick up the sweet sap that flows out. However, there’s more to their diet than just sap; these birds will also eat a wide variety of insects, especially ants, berries, and fruits. And occasionally, they’ll stop by a suet feeder.

The American three-toed woodpecker breeds farther north than any other American woodpecker species, and this includes parts of Alaska. You can find these birds in parts of that state all year-round spending time in their preferred habitat, newly burned, beetle-infested, or otherwise damaged forests.

These birds are black and white, and males of this species have a patch of yellow feathers on their foreheads. Juveniles of both sexes sport the same yellow patches.

You might have a hard time spotting these birds, as they’re generally quiet and keep to themselves, but during insect infestations across the state, American three-toed woodpecker populations increase.

The red-breasted sapsucker is a close relative of the yellow-bellied and red-naped species. Though these sapsuckers are uncommonly seen in Alaska, their presence has been recorded in the southeastern portion of the state.

You’ll know these birds by their red heads, necks, and chests, and you’ll likely find them drilling tiny holes in tree bark to lick up the sap and any insects that may have gotten stuck in the sticky liquid. These birds also eat insects and have been known to catch their prey as it flies through the air.

Woodpeckers are present in various spots and can be seen in forests, around dead trees, or even flying in your backyard. While most of them feed on larvae, some have more versatile diets and would also feed on plants and seeds. Most woodpeckers are widespread, but conserving their habitat is essential to guarantee that they would still be present for future generations.

Visiting the state of Alaska gives the chance to learn a lot about wildlife, as it’s home to so many fantastic animals. If you like watching birds, you will find lots of them to enjoy in this state.