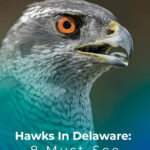 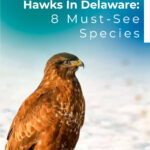 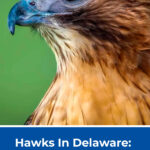 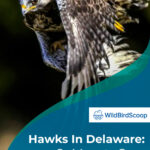 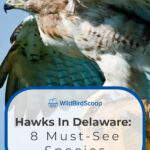 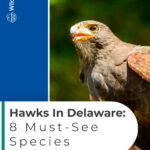 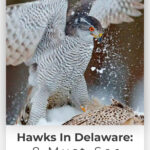 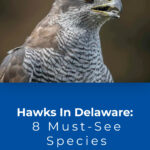 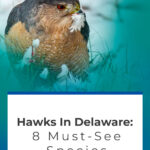 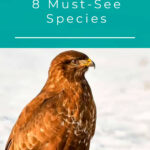 The first state in the United States of America is home to 17 state parks and three forests — one in each county — so bird watchers have plenty of opportunities to study the amazing birds that call Delaware home. Among the 420 species of birds that live there, there are eight species of hawks.

You can learn a lot by watching these majestic raptors. Keep reading to find out how to identify them.

The red-tailed hawk has a pretty distinctive look; it can be dark brown on the top and pale brown at the bottom, with a pale yellow and cinnamon tail. This is a skilled raptor with a heavy wingbeat, keeping its eyes on the prey on the ground and descending slowly to snatch it.

This bird has a diverse diet of small mammals, rodents, as well as pheasants, blackbirds, and younger birds. Younger birds feed on amphibians and fish but switch to other types of food when they reach maturity.

These hawks usually hunt in pairs and rarely visit backyards, and if you see a hawk in Delaware, it’s likely to be of the red-tailed variety.

Sharp-shinned hawks are smaller than other hawks and raptors you’ll find in Delaware. Adult birds have blue-gray bodies with distinctive orange markings on the chest. Their wings are relatively rounded and short, and female birds are significantly larger than males.

These birds of prey prefer to soar over the dense woods and use the vegetation for coverage. Sharp-shinned hawks particularly like ambushing songbirds but might feed on small mammals and rodents, too, especially during the non-breeding season.

You might be able to spot this bird, known for its acrobatic flying style and high-pitched call, at your backyard bird feeders, waiting for its next meal to show up.

Cooper’s hawk was named after naturalist William Cooper and is about the size of a crow. Adult birds have gray-blue bodies with reddish bars on their underparts, while younger birds have brown bodies.

This bird chases its prey and flies fast, usually surprising it. For this reason, Delaware birders may find these hawks in their yards catching songbirds and backyard chickens.

This hawk looks quite similar to the sharp-shinned hawk, but Cooper’s hawk is slightly bigger. If you see it feeding on the songbirds, you might try to take down your bird feeder for a few weeks until the hawk moves away.

Because the northern goshawk is a secretive bird that likes to live away from civilization, it’s a little bit more challenging for people to spot it compared to other hawks. If you are lucky enough to spot it, you’ll notice it looks a lot like Cooper’s and sharp-shinned hawks, but it’s larger and more aggressive.

These raptors have a bluish-white underbody, while the upper body is brown or gray, and it has deep red eyes with white brows that surround them.

The northern goshawk is an opportunist hunter that feeds on mammals, rodents, reptiles, birds, and even insects. If you come too close to this hawk’s nest, it will likely attack you, so tread carefully when you’re near its territory.

This hawk can most easily be identified when it’s perched, as that’s the position where its red shoulders are most noticeable. Be sure to keep your ears open for its famous call, too.

In addition to the red shoulders from which they get their name, these birds of prey have black and white checkered bodies, red chests, and black tails.

Red-shouldered hawks look a lot like the broad-winged and red-tailed varieties, but this species is slightly bigger than the other two.

This hawk prefers flying around water bodies and open woods where it can soar freely. You can also find this hawk around suburbs where the houses were built near woodlands. It feeds on small mammals, rodents, amphibians, and reptiles and might visit your backyard to feed on squirrels.

The rough-legged hawk breeds in the Arctic, but can be seen in Delaware during the winter when it travels south. Unlike most other birds, except for the ferruginous hawk and golden eagle, this bird has feathers all the way down to its toes, which explains its name and keeps it warm while in its cold, arctic habitat.

When hunting, the rough-legged bird hovers facing the wind, and it’s usually silent, except when it’s near its nest.

In the Arctic, this hawk feeds on lemmings, but in Delaware, it feeds on voles, mice, shrews, and other rodents.

Broad-winged hawks have small and stocky bodies, sporting barrings on the underpants. Their heads are reddish-brown with white markings on their tails.

Although this hawk exists across Delaware, you might not be able to see it very often, as it prefers to spend most of its time in the deep woods. These birds are known for being epic long-distance migrants, often traveling more than 4,000 miles in one direction.

The best time to spot the broad-winged hawk is to wait for the migration season, where the birds fly by the thousands. These birds like to perch on trees, waiting for a chance to fly down and catch a small rodent or mammal.

Northern harriers have owl-like heads and brown eyes that turn greenish-yellow when the birds reach maturity. These birds have strong vision and hearing senses, which enable them to catch their prey effortlessly.

This is one of the few raptors that practice polygamy, as the male is likely to take more than one female partner. In some cases, up to five females were known to mate with a single male, so the male will spend most of its time collecting food for its partners and offspring.

The northern harrier prefers to feed on squirrels, voles, and cotton rats. Male hawks also like to catch birds like sparrows, waterfowls, larks, and even ducks. When the prey is too large, the hawk will try to drown it in water first.

Delaware is home to a little fewer than one million residents, and since there are currently 45 million bird watchers in the U.S., you’ll likely meet a few of them in the First State.

Although hawks aren’t the easiest birds to spot in Delaware, you can find several species if you keep an eye on the utility lines and state forests and parks and ears open for their loud calls.